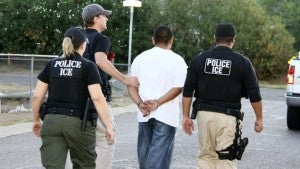 LOS ANGELES — The Obama administration has ordered immigration officials to find out if undocumented immigrants they encounter are eligible for President Barack Obama’s recent plans to spare them from deportation.

Agents at Customs and Border Protection and Immigration and Customs Enforcement have been instructed “to immediately begin identifying persons in their custody, as well as newly encountered persons” who may qualify for protection from being deported, the Associated Press reported.

The move complements Obama’s plan to focus resources on deporting immigrants who have serious criminal records or pose a threat to public safety or national security. Those whose sole offense is staying in the country illegally are not supposed to be a priority.

The new order also marks a big change, as it has been the responsibility of immigrants or their attorneys to secure their own protection against deportation.

One of the training documents issued lists encounter scenarios between agents and immigrants, and outlines the way in which agents should proceed. It also includes a checklist of questions to help figure out if immigrants are eligible for Obama’s new plan.

Crystal Williams, executive director for the American Immigration Lawyers Association in Washington, told the Associated Press that the training will assist the government in its goal to filter those who should not be a priority. She also told the news agency that this is the first she has heard of officers being ordered to evaluate immigrants for possible leniency before they were arrested.

“Just because it’s a change doesn’t mean it’s anything particularly radical,” she said.

Rep. Luis Gutierrez (D-Ill.), who has been a vocal supporter of the president’s immigration plans, said the new policy will allow the government to “move criminals and recent arrivals to the front of the deportation line. The emphasis now is on who should be deported first, not just who can be deported.”

Obama’s executive order announced in November regarding immigration is expected to shield up to 4 million individuals from deportation. In 2012, he established a similar program, the Deferred Action for Childhood Arrivals, where an estimated 1.7 million young immigrants were eligible. However, to date, only approximately 610,000 individuals have signed up for it.

Obama immigration order – what you need to know