UK moves toward making babies from DNA of 3 people 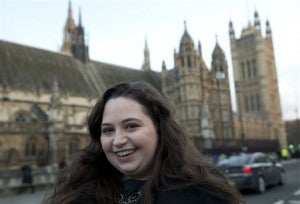 Rachel Kean activist and campaigner poses for the Associated Press outside the Palace of Westminster, after she witnessed the vote on 3 parent babies in the House of Commons, in London Tuesday, Feb. 3, 2015. Britain’s House of Commons gave preliminary approval Tuesday to permitting scientists to create babies from the DNA of three people, a technique that could protect some children from inheriting potentially fatal diseases from their mothers. The bill must still needs approval by the House of Lords _ and a further Commons vote on any amendments _ before becoming law. If so, it would make Britain the first nation to allow embryos to be genetically modified. Britain has long been a leader in reproductive technology; the world’s first baby from in vitro fertilization, Louise Brown, was born in the U.K. in 1978. (AP Photo/Alastair Grant)

LONDON — Britain moved Tuesday toward allowing scientists to create humans from the DNA of three people.

The technology aims to liberate future generations from inherited diseases, but critics say it crosses a fundamental scientific boundary and could lead to “designer babies.”

The U.K.’s House of Commons voted 382-178 in favor of legislation to license these experiments. If approved in the House of Lords, Britain would become the world’s first nation to allow genetic modifications in human embryos.

“This is a bold step to take, but it is a considered and informed step,” Health Minister Jane Ellison told the Commons.

The technology is completely different from that used to create genetically modified foods, where scientists typically select individual genes to be transferred from one species into another. But critics say it crosses a red line, since changes made to embryos will be passed on to future generations, with the potential for unforeseen consequences.

While this legislation was drafted specifically to grant permission only for certain specified techniques, critics fear it will encourage scientists to push for other experiments in the future.

The protests are “about protecting children from the severe health risks of these unnecessary techniques and protecting everyone from the eugenic designer-baby future that will follow from this,” said David King, director of the secular watchdog group Human Genetics Alert.

The technology altering a human egg or embryo before transferring it into a mother with defects in her mitochondria, the energy-producing structures outside a cell’s nucleus. These genetic defects can result in diseases including muscular dystrophy, heart, kidney and liver failure and severe muscle weakness.

Scientists say more than 99 percent of the DNA in the resulting child would come from its parents, with a tiny fraction coming from the donor egg.

Britain’s Chief Medical Officer, Dr. Sally Davies, said the law would give women with mitochondrial disease “the opportunity to have children without passing on devastating genetic disorders.”

Britain has long been a leader in reproductive technology; the world’s first baby from in vitro fertilization, Louise Brown, was born in the U.K. in 1978.

U.S. regulators are moving more slowly: Scientists at a U.S. Food and Drug Administration meeting on the techniques last year warned it could take decades to determine if they are safe. Meanwhile, experts say the techniques are likely being used elsewhere, such as in China and Japan, but are mostly unregulated.

“Scientists around the world…have raised many cautions about the risks to any children that might result from these techniques,” said Marcy Darnovsky, who directs the Center for Genetics and Society, an American advocacy group. “We urge women who might consider undergoing this biologically extreme procedure to carefully investigate.”

But Rachel Kean, whose mother is a carrier of mitochondrial disease, said the techniques offer hope to women who face a devastating dilemma of potentially passing on genetic defects. Kean’s aunt suffered several miscarriages and stillbirths and was ultimately killed by the disease.

“Knowing that you could bring a child into this world for a short, painful life of suffering is not something I would want to do,” said Kean, an activist for the Muscular Dystrophy campaign.

A spokesman for Prime Minister David Cameron said he was a “strong supporter” of the legislation. Cameron’s severely disabled son, Ivan, died at age 6 in 2009 from a rare form of epilepsy.

No date has been set for debate in the House of Lords, but it is expected to be in the next few weeks. It would be unusual for it to reject legislation that has passed overwhelmingly in the Commons.

The techniques would likely be used about a dozen times a year in British women with faulty mitochondria. Each case would be closely scrutinized, and doctors would track the health of any children born as well as their future offspring, said Lisa Jardine, who chaired a review by Britain’s fertility regulator.

“Every medical procedure ultimately carries a small risk,” Jardine said, pointing out that the first in-vitro baby was the product of an experiment with unproven methods.

Kean understands the opposition: “It’s everybody’s prerogative to object, due to their own personal beliefs,” she said. “But to me the most ethical option is stopping these devastating diseases from causing suffering in the future.”