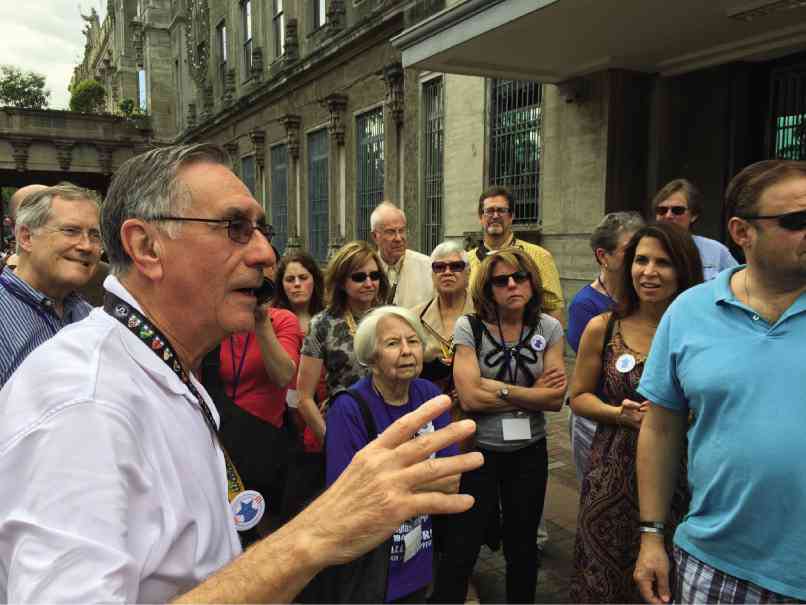 “BATCH ’45” George Baker (second from left), a British national who was only a child when he and other foreigners were detained by Japanese forces at the University of Santo Tomas during World War II, leads a tour for other former internees and their family members at the UST main building on Tuesday.

MANILA, Philippines—They are called “Batch ’45” of the University of Santo Tomas (UST)—not for hurdling any course at the country’s oldest university but for surviving the war years inside the Manila campus when it was turned into an internment camp by the Japanese army.

Twelve foreign nationals who were still children when World War II broke out returned to UST on Tuesday to retrace and share their experiences from 1942-45, in one of the activities marking the 70th anniversary of the Liberation of Manila.

The former internees, along with family members, came as a group called the Bay Area Civilian Ex-Prisoners of War (Bacepow). Among them was George Baker, who was only 10 when he and his family were detained at UST.

In hindsight, he said, UST was unlike other POW camps in Europe and in other parts of Asia since it was initially run by Japanese civilians who allowed the internees some measure of freedom inside the camp.

“For the children, they can wander around without being afraid of anything. So long as we obeyed the Japanese, we were fine,” said Baker, a Briton who immigrated to Canada a few years after the war.

For the adults, they survived the first two years of internment by helping each other in what Filipinos now call the “bayanihan” spirit. The Japanese allowed them to form committees taking care of their daily needs, keeping the peace and even providing some forms of entertainment.

“It was very well regulated. It was a cooperative enterprise where everybody did what they were supposed to do and made things pleasant for everybody—until we were starved,” he said.

For conditions changed drastically in 1944, when Japanese military officials took over, Baker recalled. The organizations set up by the internees were dissolved and food rations were tightened, causing more deaths due to malnutrition.

After a talk with UST students, Baker led fellow former internees in a tour around the UST main building, describing how it looked during the war and telling more stories about life inside the camp.

Mary Beth Klee, whose mother, Leonore Iserson, was also detained at UST as a teenager, said the internees kept despair at bay by not giving up hope that their American liberators were coming.

“The will to live and survive was so strong. They found meaning to endure, survive and triumph,” said Klee, who is writing a book based on the stories told by her mother.

The “Santo Tomas Internment Camp” was finally reclaimed by American forces on the night of Feb. 3, 1945—a most memorable moment for the internees.

“It was an exciting time. After American tanks rammed through UST’s fences, there was joy all around. I specifically remember one of my older brothers bringing us the food, rice, and tobacco he got from the looted Japanese barracks. We were surprised that there was that much supplies around,” Baker recalled.

Iserson even “dressed up” for the jubilation that followed that night and on the succeeding days, Klee said. “There was a joyous atmosphere all around that night they were liberated.”

After the war, Baker went on to become one of the engineers who would build Canada’s first telecommunication satellite.

Iserson, meanwhile, excelled in her studies back in the US and led a long career as a librarian. She died in 1996 at age 67.

“My mom and her friends that I have met, they’re real ‘seize the day’ people. This experience of being interned here made them feel like every moment of your life is precious and if you have the opportunity to be free, make something of your life and take it,” Klee said.

Read Next
3 young artists lauded for winning in Czech Republic art show
EDITORS' PICK
EDITORIAL: To a bike-friendly future
vivo’s coming to town to grant wishes with more holiday promos
The Best Tech Gifts For The 2022 Holidays
Pagasa: Warm, sunny Sunday in most parts of PH
House energy committee chair Arroyo bats for cheap electricity
Is it safe to talk politics again at family gatherings? ‘The Reconciliation Dinner’ shows us what that’s like
MOST READ
LOOK: Vhong Navarro transferred to BJMP detention facility in Taguig
The Elephant Man in the Senate
Posh village as ‘shabu’ haven
LOOK: Zanjoe Marudo bonds with Ria Atayde, her family
Don't miss out on the latest news and information.