MANILA, Philippines — Pope Francis has said that he will never forget how Leyteños showed faith and endurance during his short visit to the province last January 17.

In a letter sent to Palo Archbishop John Du dated January 21, Pope Francis said that he would continue to include the Leyte faithful in his prayers.

“I thank you, too wholeheartedly, for the witness of faith and endurance which your people showed me in the midst of trials. I will never forget this—may the Lord never permit to—and I will keep them in my prayers,” the Pope said.

The Supreme Pontiff apologized anew for his shortened visit in the province. 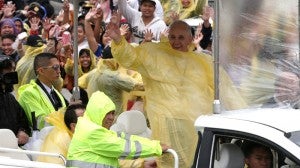 “I was deeply saddened that the weather warning forced us to anticipate our departure by four hours; this prevented a more relaxed visit with your people and in the Cathedral later that afternoon. I ask your forgiveness for any impatience on my part at that time,” Francis said.

During his visit to Tacloban and Leyte, he held Mass before 120,000 pilgrims, mostly survivors of supertyphoon “Yolanda” (international name: Haiyan) and bless the Pope Francis Center for the Poor.

The Pope’s Leyte visit was marred with tragedy as 27-year-old volunteer Kristel Mae Padasas was killed after a sound box fell on her head.

Pilgrim killed by falling scaffolding after papal Mass in Leyte