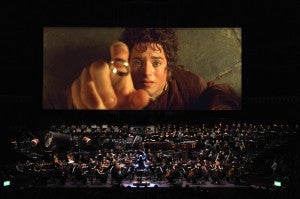 The Academy Award-winning films will be shown in High Definition on a giant 48’ by 20’ screen with 250 musicians and singers on stage. The live musical score, performed by the symphony and chorale, will be played in sync with the film.

Previously, a three-performance ticket package was offered for the entire trilogy and continues to be available. Effective February 5, tickets for each individual performance will go on sale.

“These premiere performances of ‘Lord of the Rings’ are a once-in-a-lifetime opportunity,” said Andrew Bales, general director of Symphony Silicon Valley. “The power of the ‘Ring’ enhanced by the power of live music creates a unique experience for the fans of ‘Lord of the Rings,’ These are the only West Coast performances of this epic event and our musicians are thrilled to bring it to you.”

The “Lord of the Rings” films, directed by Peter Jackson and based on the JRR Tolkien novels, have won 17 Academy Awards. The Symphony Silicon Valley, choruses and soloists will be on stage beneath and in front of the screen for these historic performances. Howard Shore’s award-winning score is 1200 pages in length.

Effective February 5, seats for each individual performance will be available in a price range of $60, $90 or $120.

Lord of the Rings Cycle 1:

Lord of the Rings Cycle 2

These special performances are coming directly from Lincoln Center in New York, where they will be presented by a Swiss orchestra, with European musicians, the week before San Jose’s performances. (The New York performances are sold out.) Tickets for all three films in San Jose may still be purchased in a complete trilogy package at $330, $240 and $150.