US role in Maguindanao operation questioned 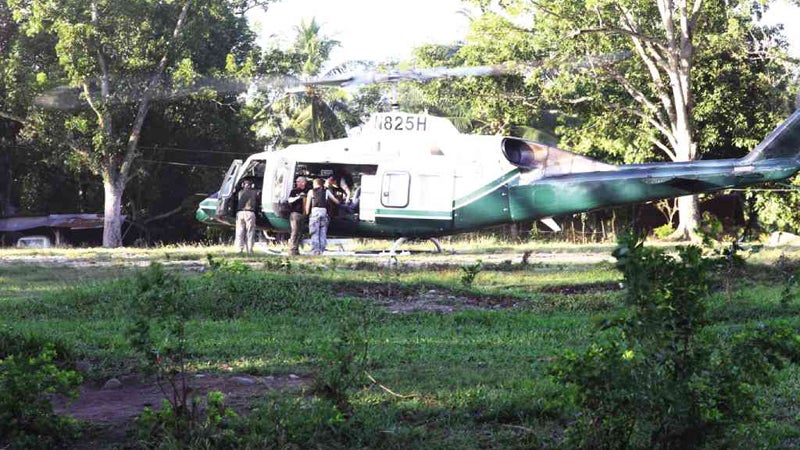 U.S. AID US forces use their helicopter to airlift Philippine police commandos wounded in a clash with Moro rebels from the Shariff Aguak Provincial Police command to a hospital in Camp Siongco in Datu Odin Sinsuat. FERDINAND CABRERA/Contributor

MAMASAPANO, Maguindanao—Was the US government behind the botched operation that led to the deaths of scores of elite police forces on Sunday?

An Inquirer correspondent saw the four Americans, who arrived on a white and green Bell helicopter, but Philippine and US officials said that the United States was simply responding to a request for assistance to evacuate the dead and wounded.

Amirah Lidasan of Suara Bangsamoro said it was not the first time that US soldiers were seen after clashes with rebels and other armed groups in Mindanao.

“The permanent presence of US troops in the conflict area conditions the minds of the public to the need for their assistance, glossing over the fact that it was due to the continuing obedience of the Philippine government to the US global war on terror that military and police do the operations based on false reports,” Lidasan said.

She said most of these false reports had led to encounters in the past.

“Congress and Senate should start its investigation on the reports of presence of US troops in conflict areas and are always seen right after combat operations,” she said.

Capt. Jo-anne Petinglay, regional military spokesperson, said the US personnel in Mamasapano had no hand in Sunday’s clash. She said they merely helped in evacuating wounded policemen. “They were on the scene on humanitarian grounds,” she said.

The US Embassy in Manila said that the US military was responding to a request from the Armed Forces of the Philippines for transport assistance.

US Embassy spokesman Kurt Hoyer said in a text message, “At the request of the AFP, US service members serving in the JSOT-P (Joint Special Operations Task Force-Philippines) responded to assist in the evacuation of the dead and wounded after the firefight in Maguindanao.”

Lidasan said previous reports indicated that US troops led Filipino troops in actual combat operations as part of their joint military training, which violated the terms of reference of their stay in the Philippines.

For the police and military, the immediate task was recovering the casualties in Sunday’s clash, said Petinglay.

She said there was still no plan about another operation against the perpetrators of the carnage.

But Petinglay said an investigation was being conducted by a team that Malacañang formed to determine the circumstances that led to the firefight.

The police said the ill-fated SAF force was on a “law-enforcement operation” against Malaysian bomber Zulkifli bin Hir, alias “Marwan,” and Filipino Basit Usman. Zulkifli is on Washington’s list of most wanted terrorists with a $5-million bounty while Usman carries a bounty of $2 million.

“The priority right now is to process the papers of slain policemen, identify them and notify their loved ones,” Petinglay said.

US Ambassador Philip Goldberg on Tuesday hailed the bravery of the slain police commandos.

“My thoughts, condolences to families and friends and colleagues of brave members of the Special Action Force who lost their lives this week,” Goldberg said in his Twitter account.–With a report from Christine O. Avendaño in Manila