‘The masses are Messiah’ 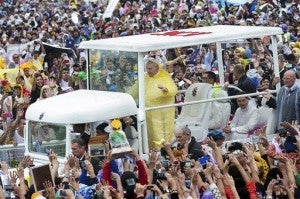 NEW YORK CITY — A record-breaking six million devotees were said to have attended the mass celebrated at Rizal Park by Pope Francis earlier this month, thrice the number that flocked to the same place when John Paul visited in 1995. That’s six percent of the population, the only predominantly Roman Catholic one in Asia.

There have been four papal visits in toto, and whenever the next one will be the current record will most surely be broken.

The Pope must have noted, how could he not, the abundance of people on the streets and even taking into account his rock-star status being the cause, Francis surely knows a connection exists between the largely impoverished nation and the propensity among the poor to have large families—encouraged by bishops who have no families of their own to raise—that can hardly support themselves. On the way back to Rome, Francis commented that Catholics don’t have to breed “like rabbits.” Was that an implicit endorsement of artificial birth control? He backtracked almost immediately and clarified that this didn’t signal any change in church doctrine.

This is the side of Francis that is both appealing and frustrating. On one hand he speaks as someone who has lived in the real world and is attuned to and has empathy for the vast majority of the laity and the pressures they face. He has softened the tone-deaf approach of his previous predecessor, with regard, for instance, to divorce and gay Catholics.

On the other hand, he makes it clear that no changes in doctrine are to be read into his comments. One wonders why not. But that might be the crafty diplomat speaking, for he has to contend with the millennia-old machinery that is the Vatican. The rate at which it changes makes a snail seem speedy. That Francis can accelerate that pace even a bit through these seemingly contradictory stances would be welcome.

What hasn’t changed and is unlikely to change is the perception that in and with him lie all the answers that devout Filipinos seek, especially those long accustomed to expecting redemption or reprieve, whatever you choose to call it, to come from the outside, from above. In this case, the hopes and frustrations of millions of Filipinos were encapsulated in their idolization of Francis, a white man in his white Pope-jeepney-mobile. I have nothing against this pontiff, whom I find immensely simpatico, but what if the pope had been African? Would there have been as many Filipinos out on the streets?

The traditional personification of salvation, whether in Manila or in Buenos Aires, has almost always been of a white man or woman. Not surprising, given the history of colonialism that brought us Catholicism—a way to paradise preached by the very same people who by the way exploited and demeaned us as a people. Our oppressors were also our self-proclaimed redeemers. The paradise they pictured was, of course, peopled by white folks like themselves, transformed into golden-haloed celestial beings translucent with light.

The presence of millions attested to the fact of a fervently held expectation, that a deus ex machina would spring up to save so many of them from lives of quiet (and not so quiet) desperation. That miracles big and small would come about, that for instance corrupt legislators would repent and actually serve the public good. We’ve seen this before, haven’t we, in the papal visits that preceded Francis’s?

That Francis’s visit engendered hope is a good thing. That that hope should be located outside one’s own agency, even outside the country, is not.

Probably one of the most though least appreciated revolutionary sentiments that serve as a counterweight to our incessant tendency to fall down on our knees and pray, is in the cliché, “God helps those who help themselves.” Bino Realuyo, a writer and friend, puts his finger squarely on this dilemma when he recently commented on his blog for the Huffington Post: “Yet I wonder if the same number of people come out to fight corruption … and organize communities around a transformative and sustainable change for a corrupt-free country, wouldn’t that be a better reason to break a record of attendance?”

Filipinos did come out en masse, actually, in 1986, and with EDSA Dos, but what Realuyo points to is grassroots, day-to-day organizing, where the real work lies. It’s great to come out in droves and waves and cheer enthusiastically, and utter all the right slogans; it is another matter the next day, when the Pope has gone, when the dictator has been banished, the pomp dissolved in the glare of the harsh tropical sun, the banners and placards and the rosaries put away, and the piety now replaced with the task of putting rice on the table. There will not be a miracle until we ourselves get off our knees and create one. As the late poet Emmanuel Lacaba put it, “Awakened, the masses are Messiah.”