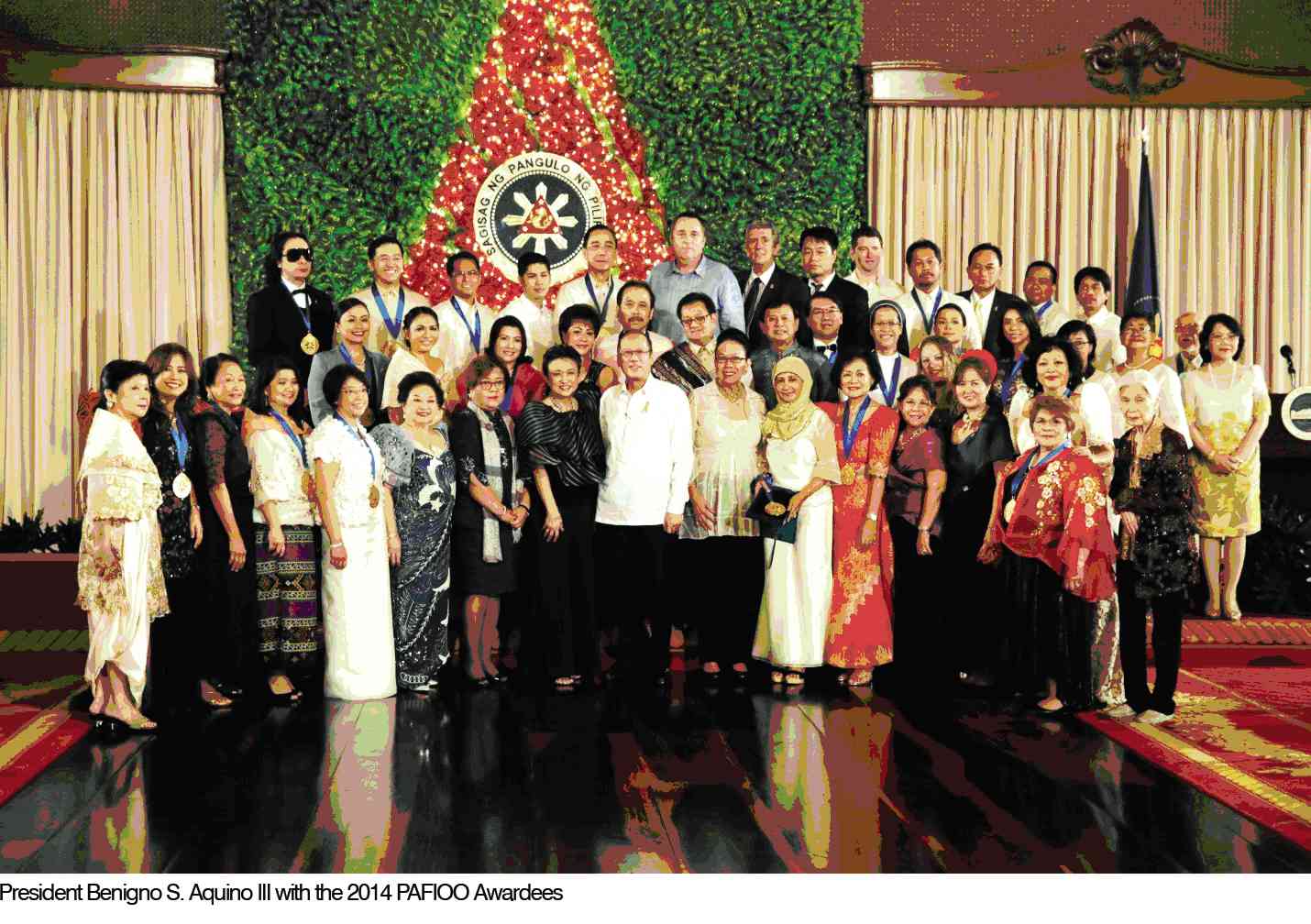 President Benigno Aquino honored 33 distinguished and outstanding overseas Filipinos and foreign-based organizations from 12 countries during the awarding ceremonies of the 2014 Presidential Awards for Filipino Individuals and Organizations Overseas last month at the Malacañang Palace.

In conferring the awards, the President was assisted by Secretary Imelda Nicolas, chair of the Commission on Filipinos Overseas (CFO).

The President commended the 27 individuals and six organizations not only for their personal and professional achievements, but also for what they’ve contributed to the development of the Philippines and the welfare of their fellow Filipinos everywhere.

Institutionalized in 1991 through Executive Order No. 498, the Presidential Awards is a biennial search for overseas-based individuals and organizations which have dedicated their work in the service and improvement of lives of Filipinos worldwide, selflessly supported relief, rehabilitation and development programs in the home country, or who have excelled in their field or profession.

The awardees were thoroughly screened from a total of 157 nominations from 29 countries by three different committees with representatives from the government, civil society, media, academe, religious and business sectors, and finally the President of the Philippines. 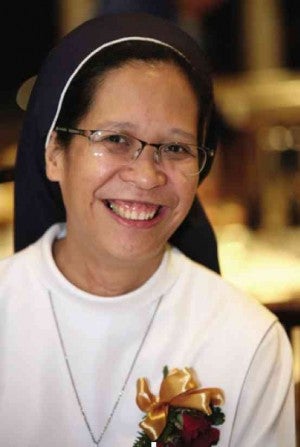 Truly, our awardees are worthy of an accolade from the President as some of them are in the forefront of protecting and promoting Filipino migrants’ rights and welfare, and a fashion designer who has made a name for himself in international haute couture.

The Banaag Award is conferred on Filipino individuals or associations for their contributions which have significantly benefited a sector or advanced the cause of overseas Filipino communities.

After obtaining her degree in tourism from the University of the Philippines Diliman in 1984, Sr. Rosa Angelica Libron took up Required Courses for Secondary Education at College of the Holy Spirit.

However, her formal spiritual calling became more pronounced while completing her master’s degree in education at De La Salle University where she majored in Religious Formation. Thereafter, she studied Korean and obtained a Level 4 Certificate of Korean Language Proficiency.

Fondly called as Sr. Angel, she is truly an angel sent to her fellow Filipinos in South Korea. Although her coming to South Korea as a missionary was for Koreans, this didn’t close Libron’s eyes to the plight of her compatriots. She is readily available to extending her hands to her kababayan in need.

While a regional leader of their congregation’s mission, Holy Spirit Sisters in Korea, Libron has had multiple roles for Filipinos in distress. It was so natural of her that her concern and care for Filipinos could not be contained.

From medical to financial assistance were provided to mostly undocumented Filipino migrants and Filipinos married to Koreans through Libron.

These were made possible through her ability to successfully solicit and convince different nongovernment organizations and some local level government units of Korea even when a Filipino woman is not eligible for the benefits due to some legal impediments.

She made it a point to be available when her wards would undergo stressful medical procedures.

Who would have thought that some homeless Filipino families in a foreign land would be sheltered with their own without spending any amount?

Libron proved a possibility to this because of her intervention.

Community building can also be attributed to Libron. With her education and formation programs, she was instrumental in the establishment of the Filipino-Korean Community which is now the sole Filipino community in Guri City with 100 Filipino-Korean multicultural families and well-trained leaders since 2010.

As a guidance counselor in a Filipino community in Onam in 2014, she addressed the marital concerns of Filipinos married to Koreans.

She helped them work out their critical problems by dishing out sound advice which enabled them to cope and weather the psychological consequences of a breakdown in family relations.

Acknowledging that the little knowledge of the Korean culture and language are great contributors to worsening multicultural marriage, Libron provided free language lessons to Filipinos.

For some, their long journey from their houses to Libron’s classroom is nothing as compared with what they are learning from her teachings as they are very comfortable with asking her anything.

Her counseling prowess made them realize the importance of developing a sense of independence if one were to survive in a foreign land.

After her six-year stint as the congregation’s leader, Libron was assigned to the HIV/AIDS ministry of the Korean government.

Despite her assignment for Koreans solely, her calling to look at the welfare of her fellow Filipinos didn’t wane.

As confidentiality is of extreme importance with her endeavor in handling HIV/AIDS cases, little is known of her humanitarian efforts.

Filipinos afflicted with HIV were put under her care and were given medication, food and counseling.

Her partnership with an American in running a charitable institution is her way of continuously providing for what she thinks are immediate needs of survival for Filipinos who needs special attention. Libron’s relentless love for them is indeed priceless.

In conferring the Banaag Award to Libron, the President recognizes her selfless dedication which ensures that Korea-based Filipino migrants can lead peaceful and meaningful family lives, and her inclusive missionary thrust that extends itself to both Korean and Filipino beneficiaries.