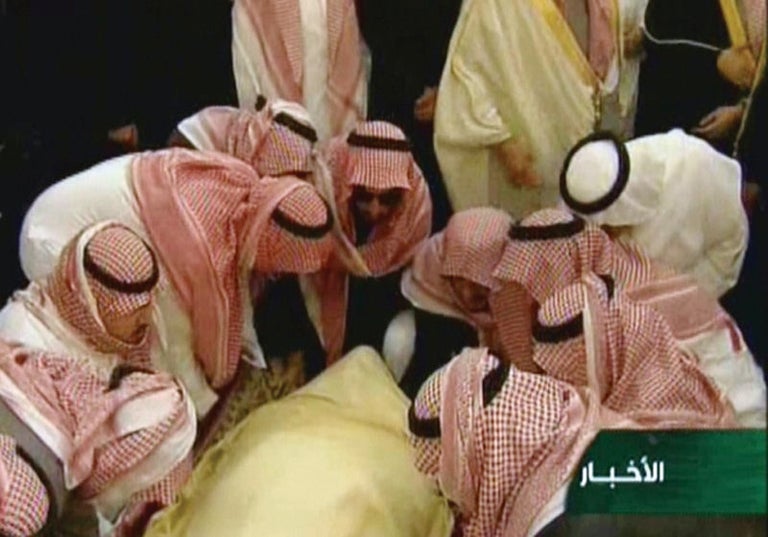 The Philippines on Friday extended its condolences and sympathies to Saudi Arabia over the death of King Abdullah, whom Philippine officials described as a “courageous, generous and visionary leader.”

A true friend of the Philippines, he was the first Saudi king who contributed his own money to save an overseas Filipino worker.

Abdullah, son of King Abdul-Aziz Al Saud, the founder of Saudi Arabia, died in a hospital early Friday at age 90.

The royal court did not disclose the exact cause of death, but an announcement quoted by the official Saudi Press Agency said the king had a lung infection when he was admitted on Dec. 31 to a Riyadh hospital.

The king was buried in Riyadh on Friday afternoon.

Hundreds of thousands of Filipinos work in Saudi Arabia, fleeing high rates of poverty and joblessness at home to look for better job opportunities.

“The King’s receptiveness to the concerns of the Filipino government helped to improve the welfare and prospects of our countrymen in Saudi Arabia,” deputy presidential spokesperson Abigail Valte told reporters in Malacañang.

She said Abdullah “reached into his own coffers” to help imprisoned Filipinos in Saudi Arabia, including paying “blood money” in 2013 to save the life of Rodelio Celestino Lanuza, who had been on death row for more than 12 years for stabbing to death Mohamad Al Qahtani in June 2000.

Valte said the king shouldered the SR2.3 million (P27 million) of the SR3 million (P35 million) indemnity demanded by the family of the victim. The Philippine government and supporters of Lanuza could raise only SR700,000 (P8 million).

“He was the first Saudi king who contributed blood money to save the life of an overseas Filipino worker,” Binay said in a statement.

“We share in the grief of the entire nation of Saudi Arabia and mourn the loss of a great friend of Filipinos,” Binay said.

Abdullah also gave Filipino workers in Saudi Arabia a chance to “correct their status,” Valte said, referring to the king’s agreeing to the extension more than once of the deadline for foreign workers to correct their residency or work status in order to legalize their stay in the kingdom.

During a state visit to Saudi Arabia in 2006, then President Gloria Macapagal-Arroyo sought clemency for 50 Filipino workers imprisoned there. King Abdullah pardoned them and Arroyo brought them home on a chartered plane.

“These actions will be remembered by our government, and by those who were positively affected by [King Abdullah’s] decisions and efforts,” she said.

The late King was a “courageous, generous and visionary leader who introduced policy changes in education and infrastructure,” the Department of Foreign Affairs (DFA) said in a statement.

A close and influential ally of the United States, Abdullah joined the fight against extremism and brought reforms to Saudi Arabia, including opening opportunities for women, the DFA said.

“Under King Abdullah, Saudi Arabia strengthened its contributions as a positive force in the global economy,” it said.

Abdullah’s passing is a profound loss not only for Saudi Arabia and the Islamic world, but also for the community of responsible nations, it said.

Saudi Arabia is funding the concreting of 68.6 kilometers of secondary roads in Mindanao. The Department of Public Works and Highways (DPWH) said the projects cost P2.38 billion.

The Cotabato City East Diversion Road will decongest traffic in the area. Its development involves the construction of an initial 13.8 km of road, as well as three permanent bridges with a combined length of 495 meters, according to a DPWH report on projects funded by Saudi Arabia.

The 29.8-km Lake Lanao Circumferential Road, which would link the interior villages and the markets in the town center, would speed up the economic development of Lanao del Sur, the report said.

Saudi Arabia, through the Islamic Development Bank, has also funded the college education of dozens of poor Muslim students in the Philippines. It has also given research and development funds for science and technology courses in Philippine schools.

The Grand Imam and Ulama Council of the Philippines International Foundation Inc. said its projects, including a new mosque in Manila’s Quiapo district and the Philippines’ first Islamic university, which could rise on the site of the old GSIS compound in the city, were all recognized by Abdullah.

The Diamond Mosque will be built beside Manuel L. Quezon University on R. Hidalgo Street. It will have two stories and will be able to accommodate 5,000 men and 5,000 women. Groundbreaking is set for next month.

Samson Tocino, the foundation’s treasurer, said that when news of Abdullah’s death broke yesterday the group launched a “text brigade” urging Muslims to pray for the king.

“We prayed that King Abdullah’s soul may enter heaven, and that his successor would follow in his footsteps, since King Abdullah was a follower of the Koran’s teachings,” Arabani said.

The militant group Migrante in the Middle East, an organization of Filipino migrant workers also expressed condolences to Saudi Arabia.

The new king visited the Philippines in 1998.

Before becoming crown prince, Salman served as governor of Riyadh province for 48 years.

Seguis said Salman had been helpful to him during his tenure in Saudi Arabia. Filipino diplomats had an “open access” to Salman when he was governor of Riyadh, Seguis said.

“He assisted me in every way he could. He was the person I could go to when I needed help,” Seguis said in a telephone interview.

“Most of the staff in his office in Riyadh at the time were Filipinos. Now that he is the king, we can move on with better Philippines-Saudi Arabia relations,” he said. With reports from Annelle Tayao-Juego in Manila; Nash B. Maulana, Inquirer Mindanao; AP; AFP