PDI Page 1 one of PAL gifts to Pope 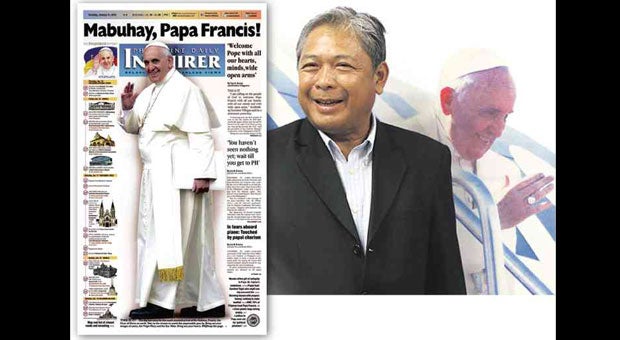 GIFT FOR THE POPE Philippine Airlines president Jaime Bautista presented Pope Francis with a framed copy of the front page of the Inquirer’s Jan. 15 issue during the Pontiff’s flight back to Rome on Monday. MARIANNE BERMUDEZ

As he flew home to Rome from Manila on Monday, Pope Francis received a framed copy of the front page of the Inquirer Jan. 15 issue as a gift from the president of Philippine Airlines (PAL).

“I handed to him a front page copy of the Inquirer on Jan. 15. And he really liked it,” Jaime Bautista, president and chief operating officer of PAL, said yesterday at a news conference with the men and women who served on the PAL flights of Pope Francis from Manila to Tacloban City and back last Saturday and from Manila to Rome on Monday.

The Jan. 15 issue of the Inquirer showed a full-body picture of Pope Francis beaming and waving under the banner headline “Mabuhay, Papa Francis!”

“We also had him sign another copy for us,” Bautista said.

Bautista also gave Pope Francis other gifts, including a letter from PAL’s chair and chief executive officer who recently regained control of the airline from San Miguel Corp.

Billionaire Lucio Tan was reportedly overseas during the papal visit.

“I also presented to him a lifestyle magazine with his photo [on the] cover,” Bautista said.

He said he also gave the Pope a membership card in the Aircraft Owners and Pilots Association of the Philippines.

“I told him the members consider [him the] wind beneath their wings,” Bautista said, recounting the encounter of PAL officials and crew with Francis on the plane before landing at Rome’s Ciampino Airport.

Members of the crew of the papal flights called “Shepherd One” shared their feelings during their encounters with the Pontiff.

Even Bautista’s voice cracked and he became teary eyed when he began thanking all the PAL personnel, including the members of the airport ground crew and the people in the catering services, who made the papal flights successful.

“It was an honor to fly him. He was an inspiration to the Filipino people,” Bautista said.

The pilots and members of the cabin crew described their flights with the Pope as “blessed.”

“We were expecting some turbulence on the way to Ciampino but the entire flight went so smooth,” said a cabin crew member, Lorenza Sarza.

Sarza was part of the crew who attended to Francis during the 14-hour flight back to Rome.

Francis Aduna, the youngest crew member on the flight, recalled one instance when the Pope, Argentinian but with Italian roots, gently corrected his pronunciation of ajillo when he asked him about his preferred meal. “It’s ahiyo (with the Latin-American Spanish sound of the “ll”), not ahilyo,” he said.

He said he was touched when the Pontiff remembered his name and told him he would always pray for them.

Sarza said the crew fully explained to Francis what dinuguan was made of.

Dinuguan is usually not appealing to foreigners in the Philippines.

“He said yes to it, and he finished it. It seems that he enjoyed it,” Sarza said.

The inflight menu was a mix of Italian and Filipino dishes. Among the Italian dishes were gambas ajillo on quinoa salad, assorted bread rolls, ciabatta slices with herbs and black olives.

The pilots on Shepherd One handpicked by the PAL management were the country’s best.

The pilot in command on all the PAL papal flights was Capt. Manuel Antonio Tamayo, who is also PAL’s vice president for flight operations.

At the controls of the flight to Rome from Manila was Capt. Eric Isaac, deputy chief pilot of PAL’s A340-A330 division.

Capt. Roland Narciso and Capt. George Alvarez were the pilots of the Pope’s flights to Tacloban and back.

The pilots managed to duck Tropical Storm “Amang” (international name: Mekkhala) but it required the abbreviation of the Pope’s visit to Tacloban and Palo town.

Bautista said some of the crew members were picked through a raffle draw.

One of the lucky ones was Rowena Clemente, whose child died from asthma two years ago.

“I was just near him. Unlike the others out there, I didn’t have to squeeze myself through a crowd,” Clemente said.

Clemente said she offered the Pope a letter from her 6-year-old child and brought to him the picture of her family to be blessed.

She said that when he saw the letter, the Pope, appearing surprised, said: “For me? For me? OK, I will read. I will read.”

“He was childlike. His eyes were so soulful like those of Padre Pio,” Clemente said.

Tears welled up in her eyes when she brought up her 23-year-old son who died two years ago.

It was her ultimate goal for her son to have peace, she said. “Being blessed by the Pope, it was like [being blessed] by the Lord himself,” she said.

Unknown to many, the flight’s captain, Tamayo, is also a man of God, being a lay eucharistic minister at San Agustin Church in Makati City for a decade now.

Flying once or twice a month as part of the management of PAL, Tamayo witnessed the Pope’s humility during his flight back to Rome.

One time, Francis went to the cockpit to personally thank the pilots. He also shared a common lavatory with the pilots and the crew members.

The crew prepared a lav for him, but the 78-year-old Pontiff kept using the one near his seat, which was also being used by the pilots.

“Our encounters were overwhelming. I am not an emotional person but I was at one point teary eyed,” Tamayo said.

He recalled one incident when Francis allowed his picture to be taken with the flight crew even if it was not allowed by the Vatican staff.

“He called me to join in the picture,” he said.

Shepherd One departed Manila on Monday at 10 a.m. for a 14-hour flight to Rome, leaving behind millions of Filipinos who made great efforts to catch a last glimpse of Pope Francis as he concluded his first visit to the Philippines.

Francis on PH visit: It rained on my parade, but beautiful!

A student reporting Pope’s visit is moved to tears