What Pope Francis considers his ‘most moving moments’ in PH 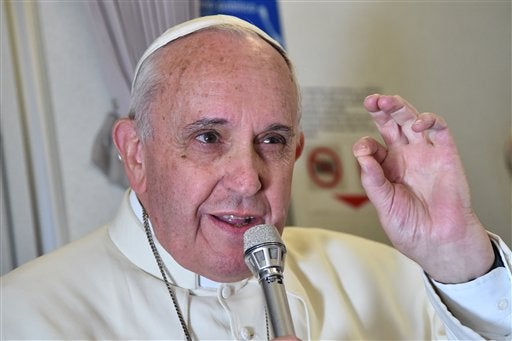 Pope Francis gestures as he talks with journalists during his flight from Manila to Rome, Monday, Jan. 19, 2015. Pope Francis flew home Monday after a weeklong trip to Asia, where he called for unity in Sri Lanka after a civil war and asked Filipinos to be “missionaries of the faith” in the world’s most populous continent after a record crowd joined his final Mass in the Philippine capital. (AP Photo/Giuseppe Cacace, pool)

MANILA, Philippines—Speaking to the media on the plane while on his way back to Rome, Pope Francis recounted his “most moving moments” during his five-day visit in the Philippines.

“For me, the mass in Tacloban was very moving. Very moving. To see all of God’s people standing still, praying, after this catastrophe, thinking of my sins and those people, it was moving, a very moving moment,” Pope Francis said during the interview with the media, a transcript and loose English translation of which was provided by America Magazine. 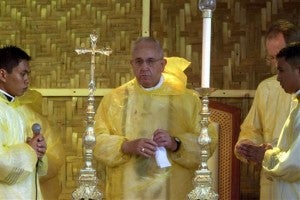 “In the moment of the mass there, I felt as though I was annihilated (“wiped out”), I almost couldn’t speak. I felt very little; I don’t know what happened to me, maybe it was the emotion, I don’t know. But I didn’t feel another thing, it was quite something,” he continued.

On Saturday, Jan. 17, His Holiness flew from Manila to Tacloban to celebrate Mass and meet with survivors of Supertyphoon “Yolanda” (international name: Haiyan), which flattened parts of Eastern Visayas in 2013.

Wearing a flimsy raincoat similar to the ones worn by the rain-drenched pilgrims, Pope Francis consoled the survivors, asking them to trust Jesus and “hold on to Mama Mary.”

His trip in Leyte, however, was cut short by the inclement weather caused by Tropical Storm “Amang” (international name: Mekkhala).

The Pope said that another memorable moment for him was witnessing people cry. He singled out street child Glyzelle Palomar, 12, who on Sunday emotionally asked: “Why does God allow bad things to happen (to children)?”

“We Christians must ask for the grace to cry, especially well-to-do Christians. And cry about injustice and cry about sins. Because crying opens you to understand new realities, or new dimensions to realities,” Pope Francis said.