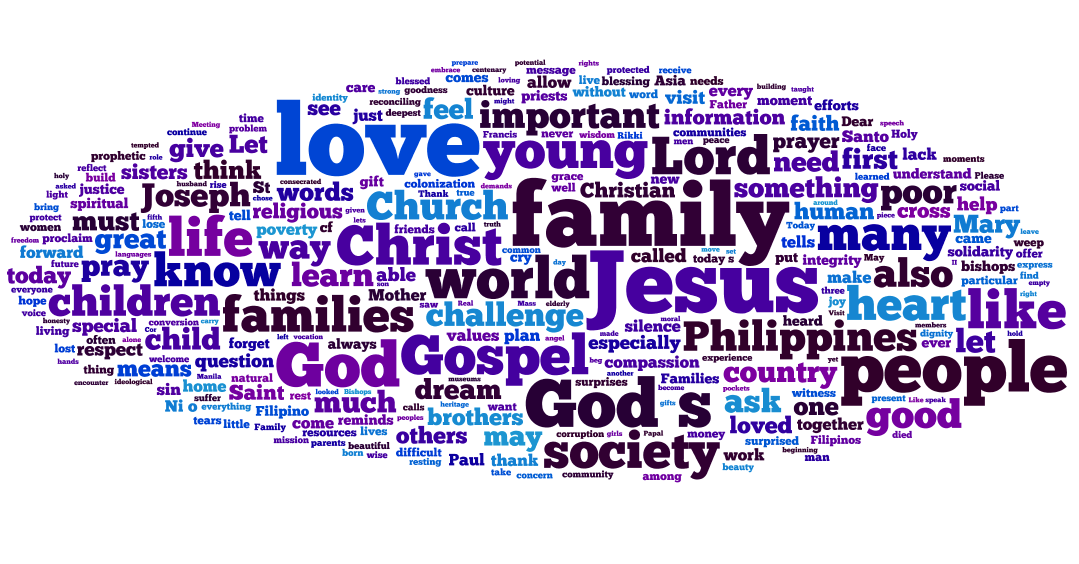 MANILA, Philippines – One of the reasons Pope Francis’ first visit to the Philippines made a lasting impression on the Catholic faithful was his impromptu speeches that came from the heart. The Holy Father may have had difficulty speaking in English but his words nevertheless reached out and touched the hearts of millions.

INQUIRER.net combed through these speeches and compiled an #InquirerSeven list of key words from, or words used most often in, Pope Francis’ speeches and homilies delivered during his five-day papal visit.

On this list, the words Jesus Christ, God, Lord and the Gospel were not included. 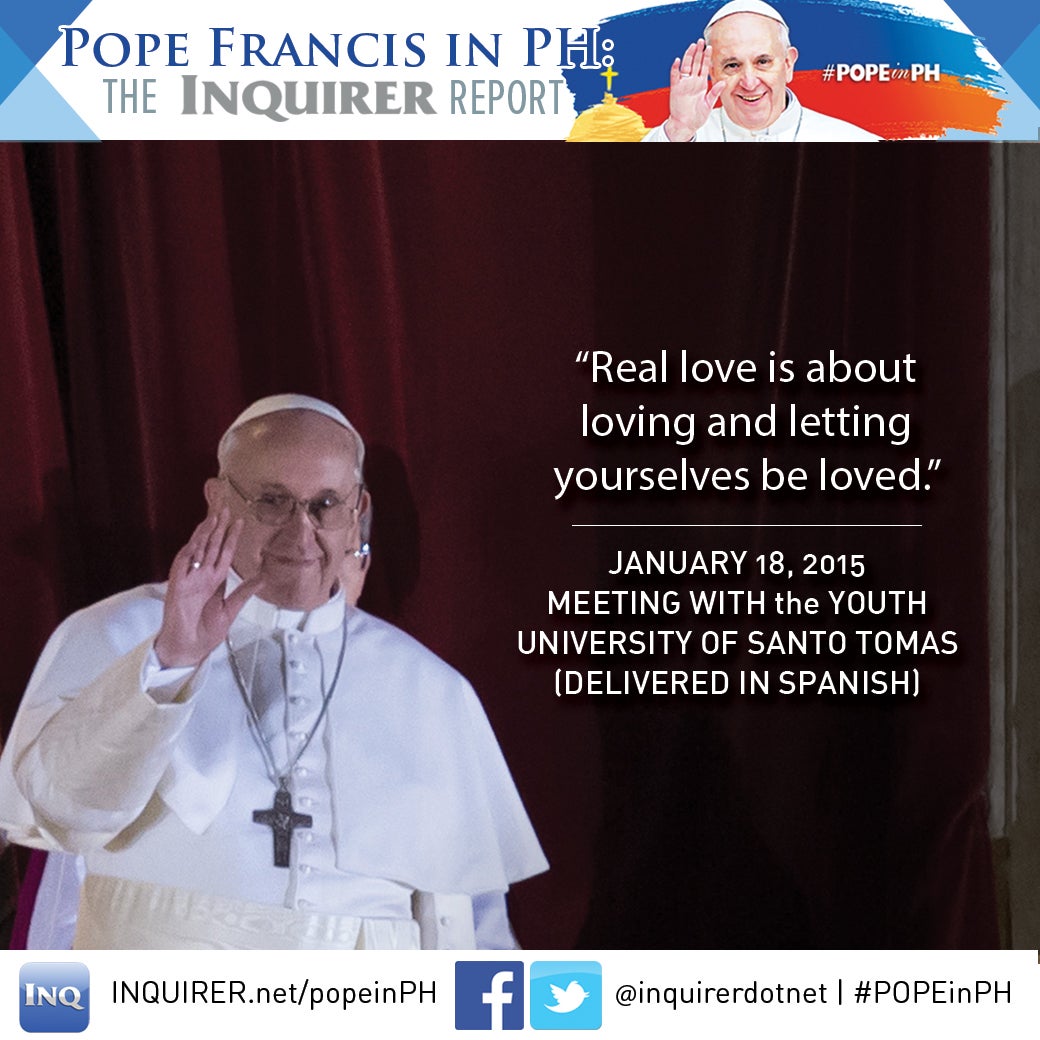 “Do you love me?” Pope Francis asked at the start of his first homily in Manila Cathedral. He had meant to quote a verse from the Bible (“Do you love me?…  Tend my sheep,” Jn 21:15-17) but his audience answered, “YES!” before he could finish.

There was an outpouring of love for the Pope during his visit to the Philippines. But while the charismatic Pontiff appreciated the love sent his way, he always brought the topic of love back to God and his “surprising love.”

“Real love is being open to the love that comes to you. The love that surprises us,” Pope Francis said in his message to students at University of Santo Tomas (UST). “Allow yourselves to be surprised by the love of God.”

Pope Francis also urged those in attendance at the Mass in Manila Cathedral to spread God’s love. “We proclaim the Good News of God’s infinite love, mercy and compassion,” he said, also quoting the Bible passage: “The love of Christ impels us” (2 Cor 5:14).

Pope Francis has emphasized the importance of family even before becoming the Vicar of Christ. In 2010, he recounted a question he posed to parents: “One of the questions I always ask young parents during confession is whether or not they spend time playing with their children. Sometimes, they’re surprised; they don’t expect this kind of question.”

He elaborated on this thought during the “Meeting with Families” in Mall of Asia Arena on Jan. 16, calling on families to continue to dream as a family, to dream of a future with Christ at the center of the household. “When you lose this capacity to dream you lose the capacity to love,” he said.

“It is in the family that we first learn how to pray. And don’t forget when the family prays together, it remains together,” he added.

Jaime Rivera’s song,”We Are All God’s Children,” even got special mention from the Pontiff during his Mass at Quirino Granstand, reminding Catholics that this was our identity. 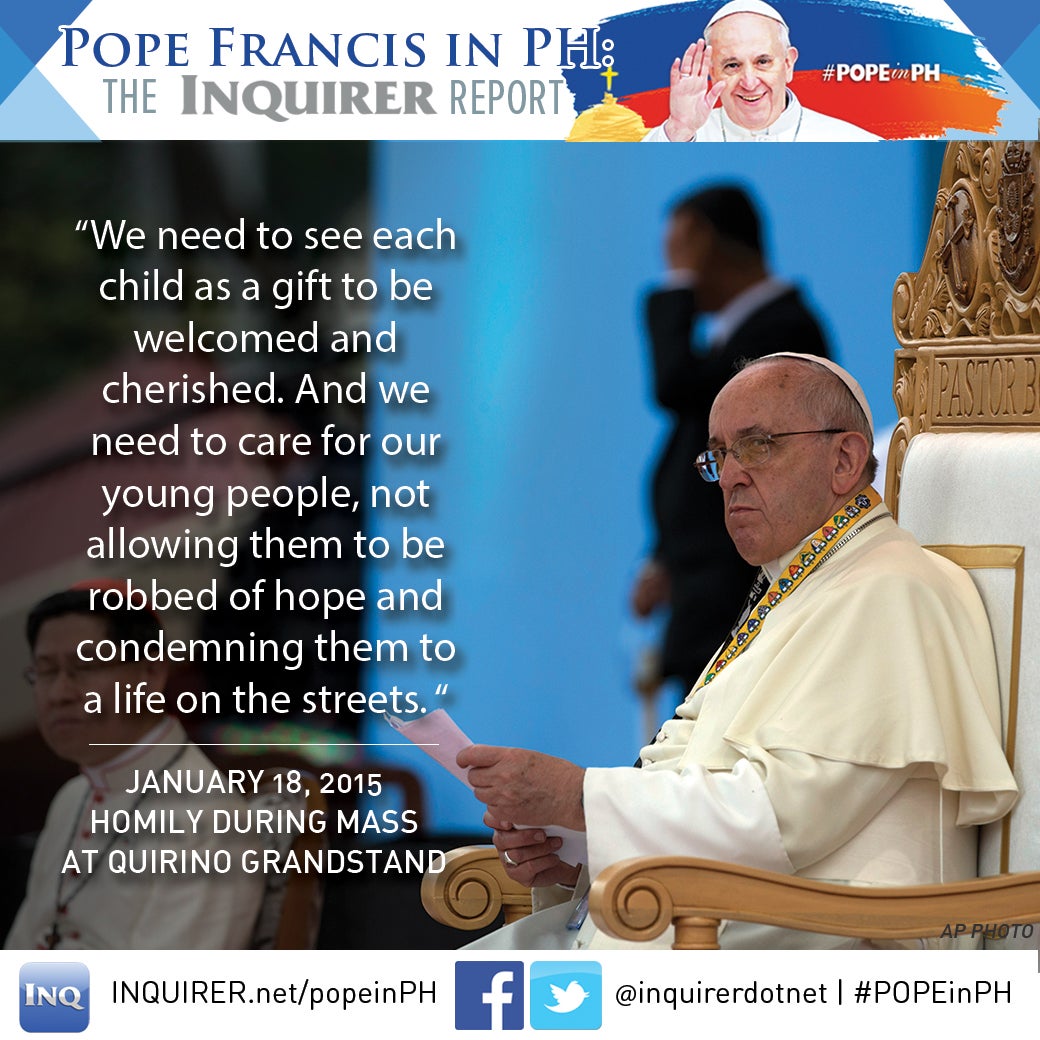 As if the numerous babies Pope Francis kissed during his many motorcades couldn’t make it any clearer, the present Pontiff has a soft spot for the world’s children, whom he often refers to as “young people.” In one of the most memorable moments during his visit, the Pope consoled 12-year-old Glyzelle Iris Palomar with a tight hug after she was unable to finish her prepared speech on the plight of street children like her during the “Meeting with the Youth” at UST.

“Why is God allowing such things to happen, even if it is not the fault of the children?” she had asked.

The Pontiff repeated the question, “Why do children suffer?” and answered in return: “When the heart is able to ask itself and weep, then we can understand something … The great question of why so many children suffer, she (Palomar) did this in tears. The response that we can make today is: let us really learn how to weep.”

The Pope, in the same message, even touched on the youth’s fascination with the latest technology, applauding its uses but warning young people against being “young museums,” or people who think they know everything because of how easy it is to obtain information today.

Two days earlier, he also urged bishops and priests in attendance at Manila Cathedral to “be present to young people who may be confused and despondent, yet continue to see the Church as their friend on the journey and a source of hope.”

In his first address to the Philippines at Malacañang, Pope Francis said that in order for a society rooted in the Gospel to prosper, Catholics must unite against prevailing threats, such as deeply rooted inequality and injustice, social exclusion, polarization and corruption.

“Today the Philippines, together with many other countries in Asia, faces the challenge of building on solid foundations a modern society – a society respectful of authentic human values, protective of our God-given human dignity and rights, and ready to confront new and complex political and ethical questions,” he said.

Family and unity, he added, are at the core of  combatting these threats to society: “For this reason, families and local communities must be encouraged and assisted in their efforts to transmit to our young the values and the vision which can help bring about a culture of integrity – one which honors goodness, truthfulness, fidelity and solidarity as the firm foundation and the moral glue which holds society together.”

The Pope, at Quirino Granstand, also once again lauded young people as the key to this society, calling on their elders to “protect, guide and encourage our young people, helping them to build a society worthy of their great spiritual and cultural heritage.”

The current Pope spared no words, no mercy and compassion, whenever he talked about the poor and the needy in society. Known for his simple lifestyle and his love for the poor.

Pope Francis, in his fourth tweet in the Philippines – in the Filipino language, no less– called on Filipinos “to go out to the needy and to serve them.”

He also challenged Filipinos at all levels of society “to reject every form of corruption which diverts resources from the poor, and to make concerted efforts to ensure the inclusion of every man and woman and child in the life of the community.”

But beyond the common definition of poor, Pope Francis also reminded those with sufficient material needs that they still lacked one thing: the ability to beg.

Learn how to beg, he said. “Have I learned how to beg? Or am I self-sufficient? Do I think I need nothing? Do you know you too are poor? Do you know your own poverty and your need to receive? Do you let yourselves be evangelized by those you serve? This is what helps you mature in your commitment to give to others. Learn how to open your hand from your very own poverty.”

When Pope Francis deviated from his prepared English speeches, his reason was always that he wanted to speak in Spanish in order to “speak from the heart.”

Most memorable, of course, was his homily during the Mass celebrated in Tacloban City with survivors of Super Typhoon “Yolanda” (international name: Haiyan), which ravaged Eastern Visayas in November 2013.

“Some of you have lost part of your families. All I can do is keep silence and walk with you all with my silent heart,” he told the survivors.

Pope Francis’ on-the-spot homily resonated the most with Filipinos both present at the Tacloban airport and following the Mass via various forms of media. It was the highlight of his five-day visit, from his choice to wear the same flimsy yellow raincoat worn by ordinary folk to his regret at being unable to stay longer with Yolanda survivors.

“I have no more words for you. Let us look to Christ. He is the Lord. He understands us because he underwent all the trials that we, that you, have experienced,” he also said. “Let us know that we have a Mother, Mary, and a great Brother, Jesus. We are not alone.” 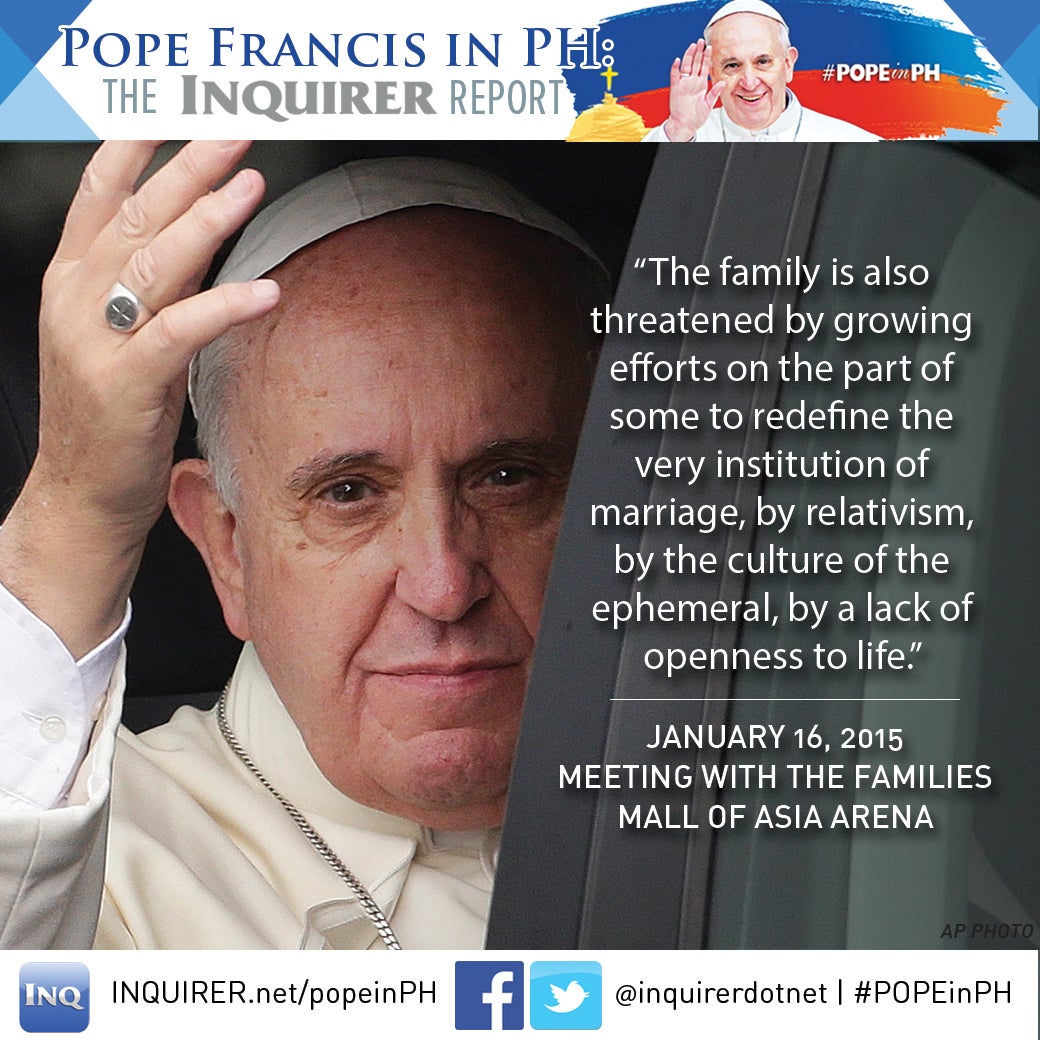 The Pope’s homily during Mass at Quirino Grandstand emphasized the Philippines’ leading role in upholding the teachings and actions of the Catholic Church in the world, particularly in Asia – where Filipinos comprise more than half of the continent’s Catholics.

“May Sto. Niño continue to bless the Philippines and sustain the Christians of this great nation their vocation to be witnesses and missionaries of the joys of the Gospel, in Asia and the whole world,” the Pontiff said.

The call to be “outstanding missionaries of faith,” as he hoped Filipinos could become and continue to be, was made even before the Pope concluded his last Mass. In his very first message in the Philippines, he ended his statement with the words: “As I begin my visit to this country, I cannot fail to mention the Philippines’ important role in fostering understanding and cooperation among the countries of Asia.”