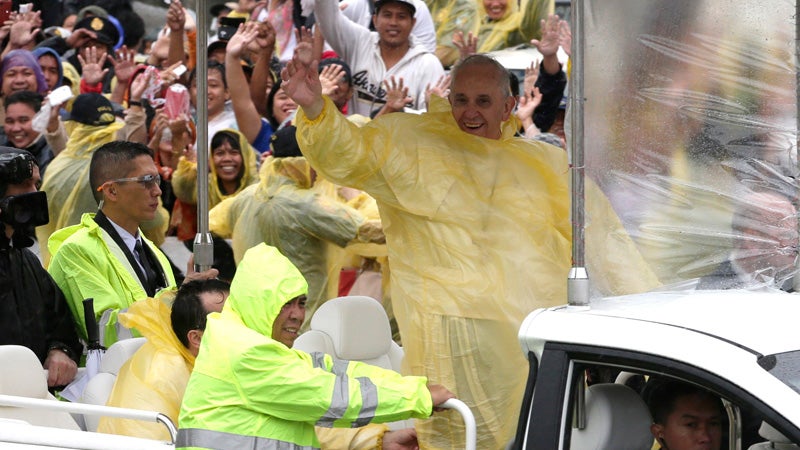 Pope Francis waves as he leaves Tacloban, Philippines, Saturday, Jan. 17, 2015. Francis cut short his day trip to ground zero of the devastating 2013 Typhoon Haiyan to avoid another approaching storm, but not before consoling survivors at a rain-drenched outdoor mass. (AP Photo/Bullit Marquez)

MANILA, Philippines–It was the decision of Vatican officials to cut short the visit of Pope Francis in Tacloban City and Palo, Leyte, on Saturday, due to the torrential rains and strong winds brought by Tropical Storm “Amang,” Interior Secretary Mar Roxas said.

Speaking in a news briefing at Aloha Hotel, Roxas said the Pope’s flight to Tacloban City took off from Villamor Airbase in Pasay City at around 7:40 a.m., or about an hour ahead of schedule because of the weather disturbance.

The Pontiff’s return flight to Manila was also moved four hours earlier to prevent the possibility of the papal delegation being stranded in Tacloban, he added.

The interior secretary said Amang was forecasted to hit land in Borongan City, Eastern Samar, a few hours before the Pope’s original flight back.

Roxas maintained that the government was only implementing the changes in the activities of the Pope as relayed to them by the Vatican officials.

“The events in Leyte had to be shortened to allow the Pope to return to Manila much earlier not because of security threat, but as adjustment to the weather,” Roxas said.

“So the Pope’s plane had to leave Tacloban before the storm makes landfall in Borongan,” he said, noting that Tacloban was within the 200-kilometer radius of the storm, which brought heavy to intense rainfall in a large swathe of Eastern Visayas.

Defense Secretary Voltaire Gazmin said the government was closely monitoring the storm’s movements within the next three days to check if there was a need to adjust the security arrangement for the Pope.

Armed Forces Chief of Staff Gregorio Pio Catapanag said another battalion of soldiers would be deployed to secure the Mass that the Pontiff’s would be celebrating in Quirino Grandstand on Sunday afternoon.

Due to the inclement weather, Roxas said the military might not be able to provide aerial security for the Pope during the religious gathering, which would draw millions of Filipino Catholics.

“With this development, we will alert all our disaster response teams. We are on alert 24 hours a day because of this situation,” he said.