There are limits to free expression 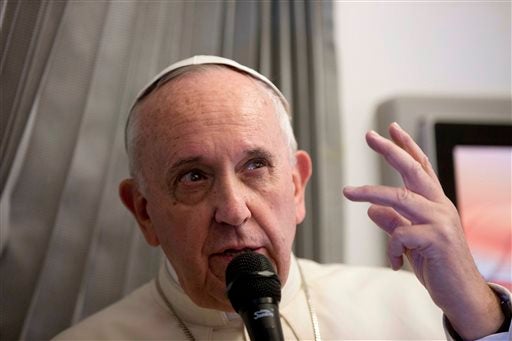 ABOARD THE PAPAL PLANE — Pope Francis said Thursday there are limits to freedom of expression, especially when it insults or ridicules someone’s faith.

Francis spoke about the Paris terror attacks while en route to the Philippines, defending free speech as not only a fundamental human right but a duty to speak one’s mind for the sake of the common good.

But he said there were limits.

By way of example, he referred to Alberto Gasparri, who organizes papal trips and was standing by his side aboard the papal plane.

Many people around the world have defended the right of satirical magazine Charlie Hebdo to publish inflammatory cartoons of the Prophet Muhammed in the wake of the massacre by Islamic extremists at its Paris offices and subsequent attack on a kosher supermarket in which three gunmen killed 17 people.

But recently the Vatican and four prominent French imams issued a joint declaration that denounced the attacks but also urged the media to treat religions with respect.

Francis, who has urged Muslim leaders in particular to speak out against Islamic extremism, went a step further when asked by a French journalist about whether there were limits when freedom of expression meets freedom of religion.

Francis insisted that it was an “aberration” to kill in the name of God and said religion can never be used to justify violence.

But he said there was a limit to free speech when it concerned offending someone’s religious beliefs.

“There are so many people who speak badly about religions or other religions, who make fun of them, who make a game out of the religions of others,” he said. “They are provocateurs. And what happens to them is what would happen to Dr. Gasparri if he says a curse word against my mother. There is a limit.”

In the wake of the Paris attacks, the Vatican has sought to downplay reports that it is a potential target for Islamic extremists, saying it is being vigilant but has received no specific threat.

Francis said he was concerned primarily for the faithful, and said he had spoken to Vatican security officials who are taking “prudent and secure measures.”

“I am worried, but you know I have a defect: a good dose of carelessness. I’m careless about these things,” he said. But he admitted that in his prayers, he had asked that if something were to happen to him that “it doesn’t hurt, because I’m not very courageous when it comes to pain. I’m very timid.”

Thousands spill out onto streets to welcome Pope Francis

Read Next
Pope on climate change: Man has ‘slapped nature in the face’
EDITORS' PICK
Omicron variant detected in more countries as scientists race to find answers
Gov’t plans to open COVID-19 vaccination for 5- to 11-yr-olds by January 2022
A delightful blessing!
Villar Group gears up for AllValue Shopping Party on Dec. 3; around P 1-million promos and discounts up for grabs
Legarda: Ending Violence Against Women, a cause for all
Gov’t eyeing COVID-19 vaccine booster for essential workers, indigents by Dec. 10
MOST READ
Omicron poses ‘very high’ global risk, countries must prepare–WHO
Quiboloy warns of ‘much worse than Omicron virus’ if his ‘persecution’ is not stopped
Bongbong Marcos’ conviction in tax case not a crime involving moral turpitude — lawyer
Marcoleta defends pol ads on ABS-CBN
Don't miss out on the latest news and information.