MANILA, Philippines – Even before his appointment as the Vicar of Christ, Pope Francis has been inspiring the Catholic faithful through thought-provoking questions on prayer, work and even homosexuality.

INQUIRER.net compiles some of them in an #InquirerSeven list of questions dubbed “Pope Francis Asks.”

1. “Tell me: when God looks at a gay person, does he endorse the existence of this person with love, or reject and condemn this person?” – August 2013 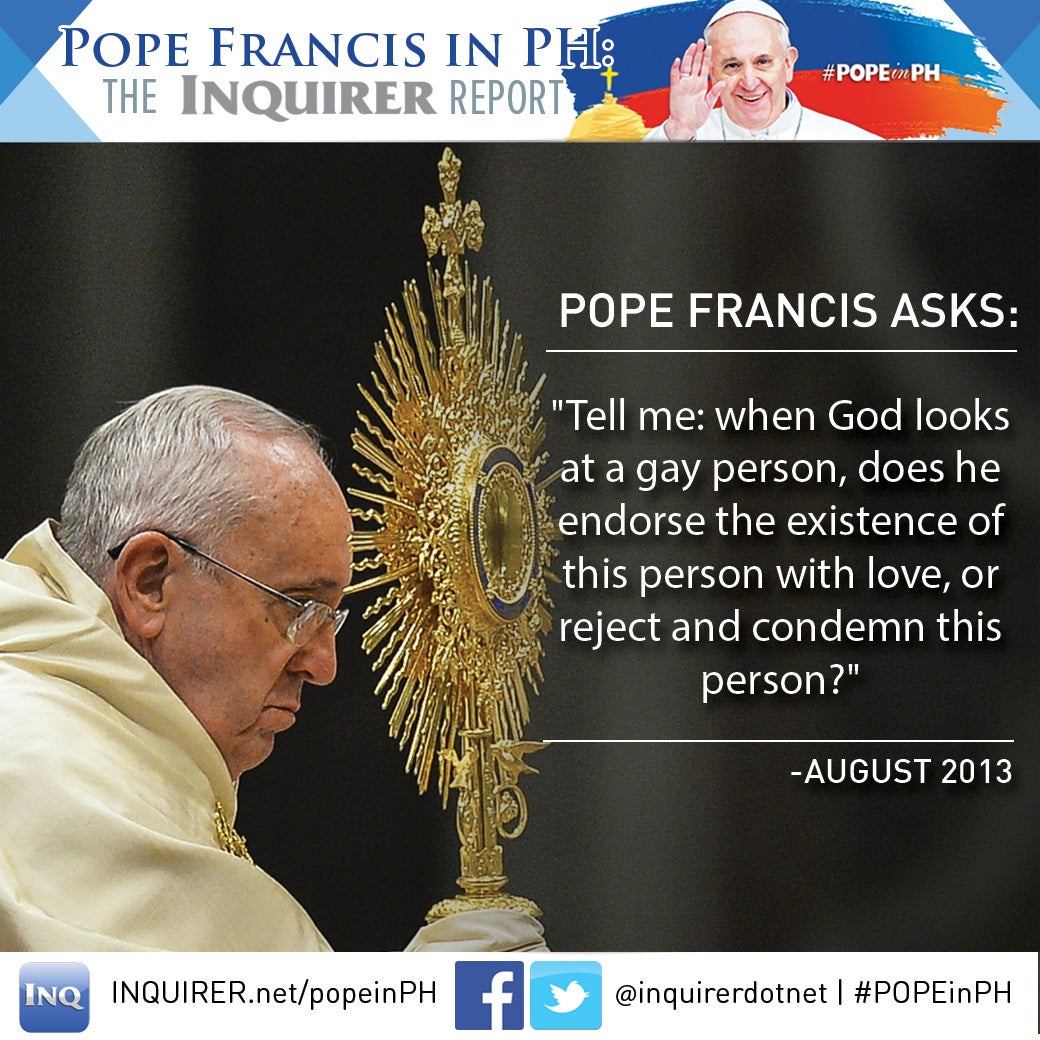 This was Pope Francis’ answer to the persistent question on the church’s−and his own–acceptance of homosexuality, first published in the September 2013 issue of America magazine, which translated into English the exclusive interview. The same interview­–one of his most telling and extensive interviews to date–included the Pope saying the Church could not “insist only on issues related to abortion, gay marriage and the use of contraceptive methods.”

2. “One of the questions I always ask young parents during confession is whether or not they spend time playing with their children. Sometimes, they’re surprised; they don’t expect this kind of question.” – 2010 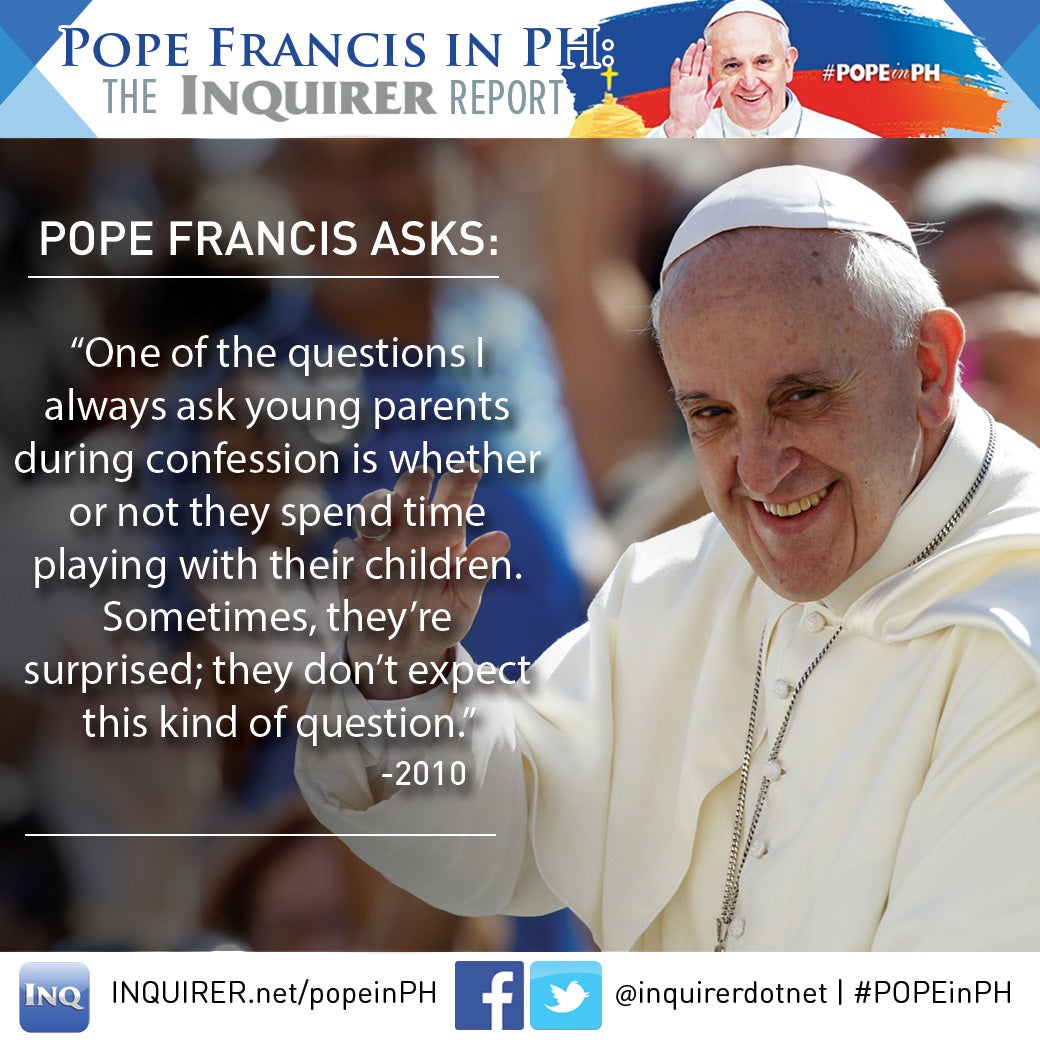 In the 2010 book “Pope Francis: Conversation with Jorge Bergoglio” by Sergio Rubin and Francesa Ambrogetti, the then Argentine cardinal shared his thoughts on labor, from how he was made to work at an early age by his father to its impact on Sundays as supposed rest days. He said parents working too much could lead to them neglecting their children.

3. “I think it’s a question that we do not face: Humanity, in the indiscriminate use and tyranny over nature, is it committing suicide?” – July 2014 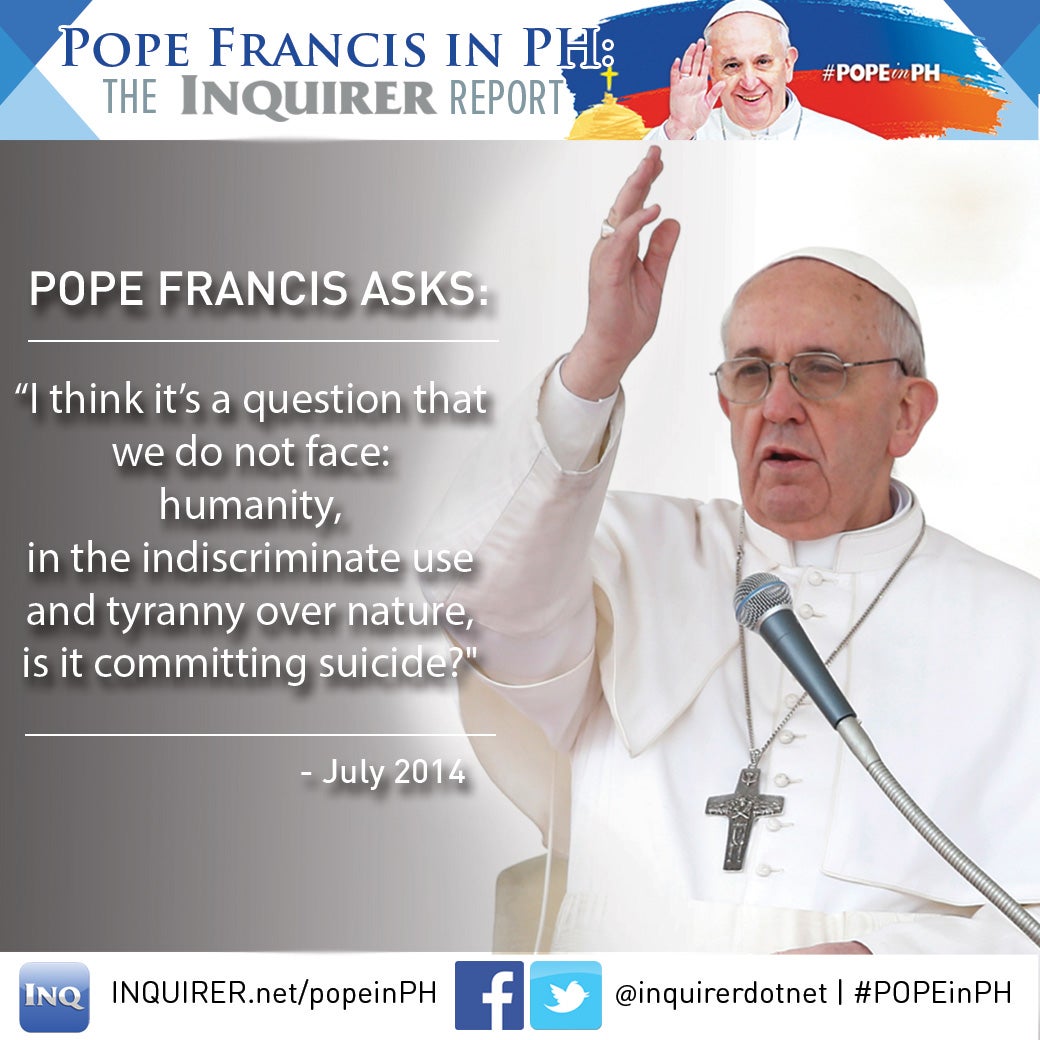 Pope Francis calls attention to mining and humanity’s abuse of the environment with this question, first published by the Argentine magazine Viva in their July 2014 issue marking his first 500 days in office. The Pope is expected to release an encyclical on climate change during his visit to Tacloban City, Leyte province, where he will have lunch with victims of Supertyphoon “Yolanda” (international name: Haiyan) and the Bohol earthquake in 2013.

4. “Is there anything more humiliating than not being able to earn a living? Is there a worse way to proclaim the uselessness and nonexistence of a human being?” – Easter 2002 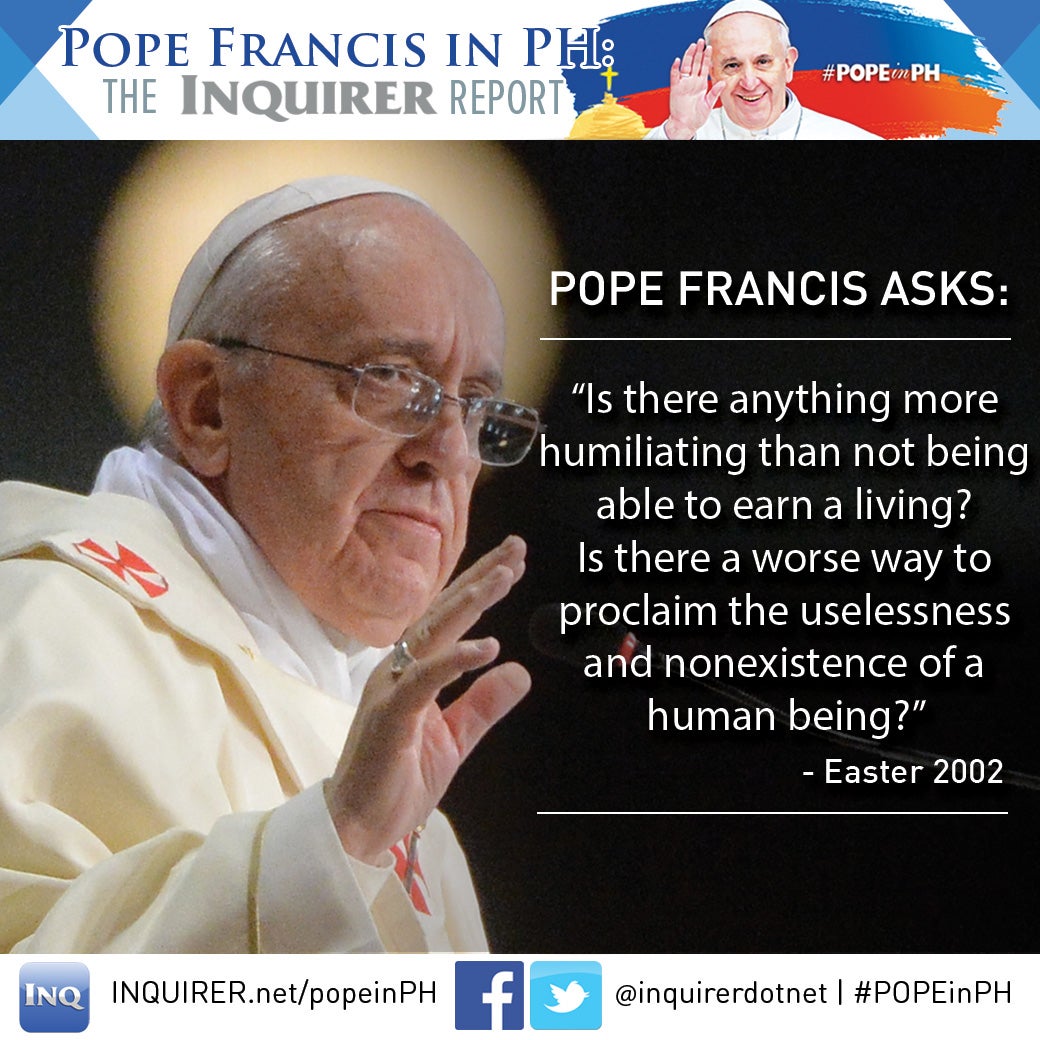 The Pontiff once again touches on the importance of work and its repercussions–both good and bad–in society. The question is one of many from the book “Conversations with Jorge Bergoglio.”

5. “How are we [the ministers of the Gospel] treating the people of God? I dream of a church that is a mother and shepherdess …. The first reform must be the attitude.” – August 2013 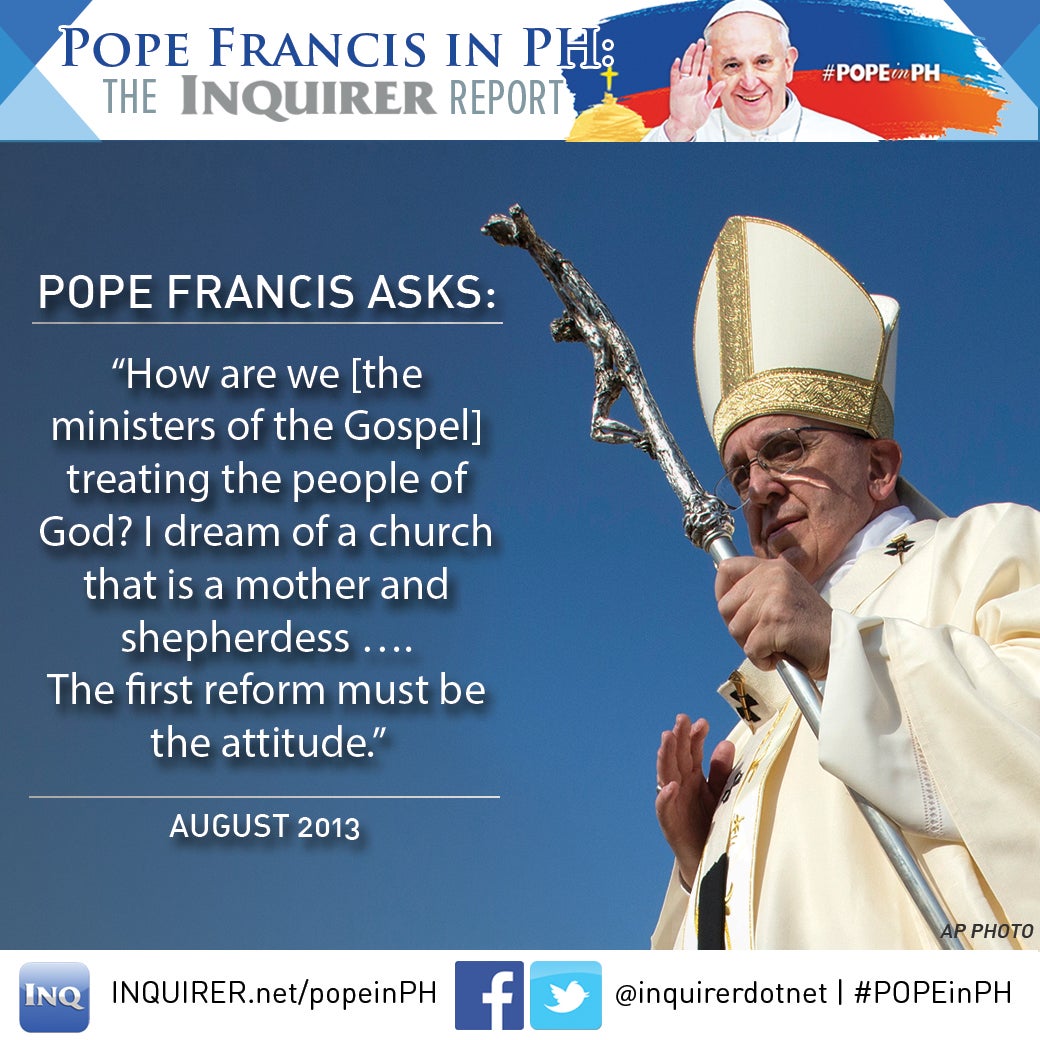 Pope Francis addresses this question, through an interview with Americana magazine, to the church–to the bishops, priests and ministers guiding the Catholic faithful–heeding them to warm the hearts of the people” and to “know how to dialogue and to descend themselves into their people’s night, into the darkness, but without getting lost.”

6. “Christmas … is a call from God who gives us this gift. Do we want to receive Him or do we prefer other gifts?” – December 2013 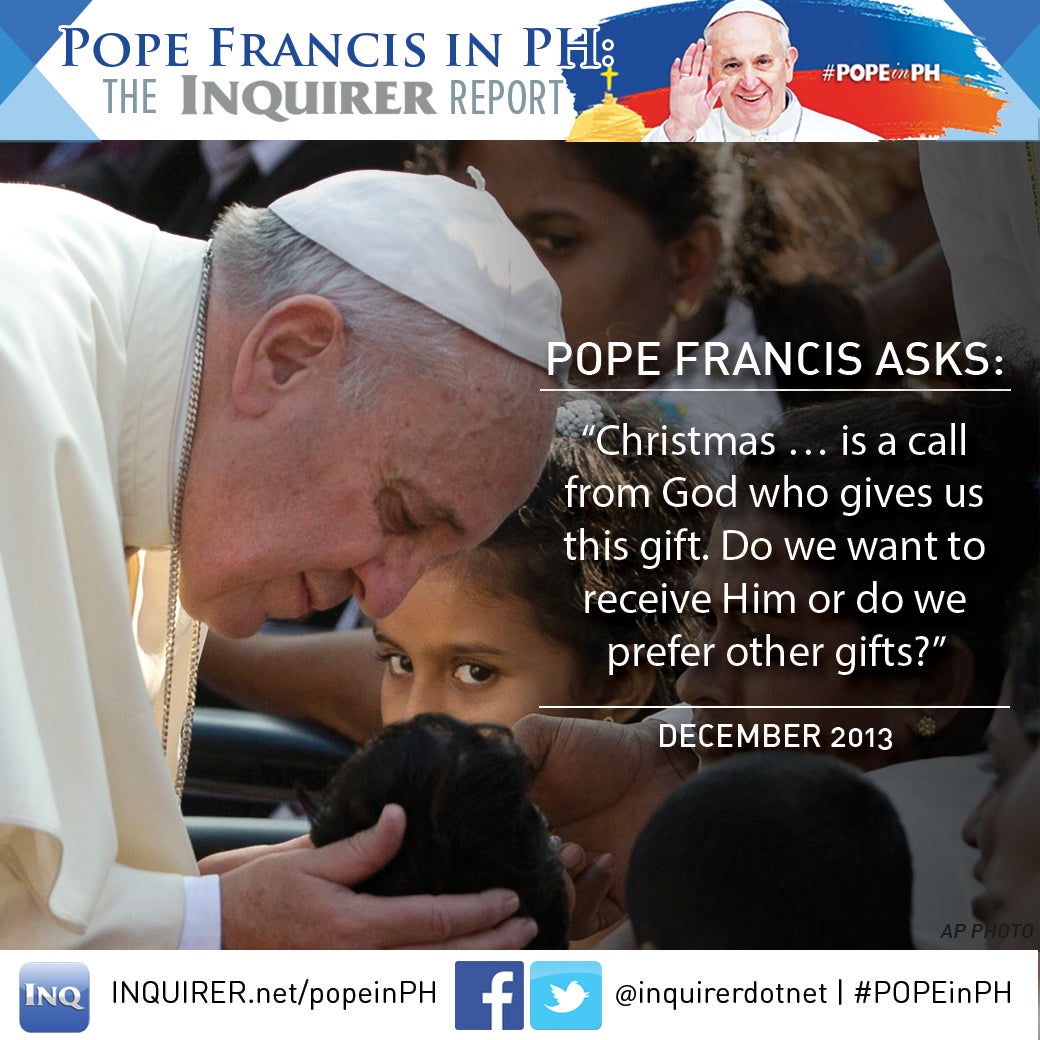 On the topic of celebrating Christmas “in a world marked by conflict and war,” Pope Francis asks us to remember what is most important during the Christmas season in an exclusive interview with Vatican Insider in December 2013. 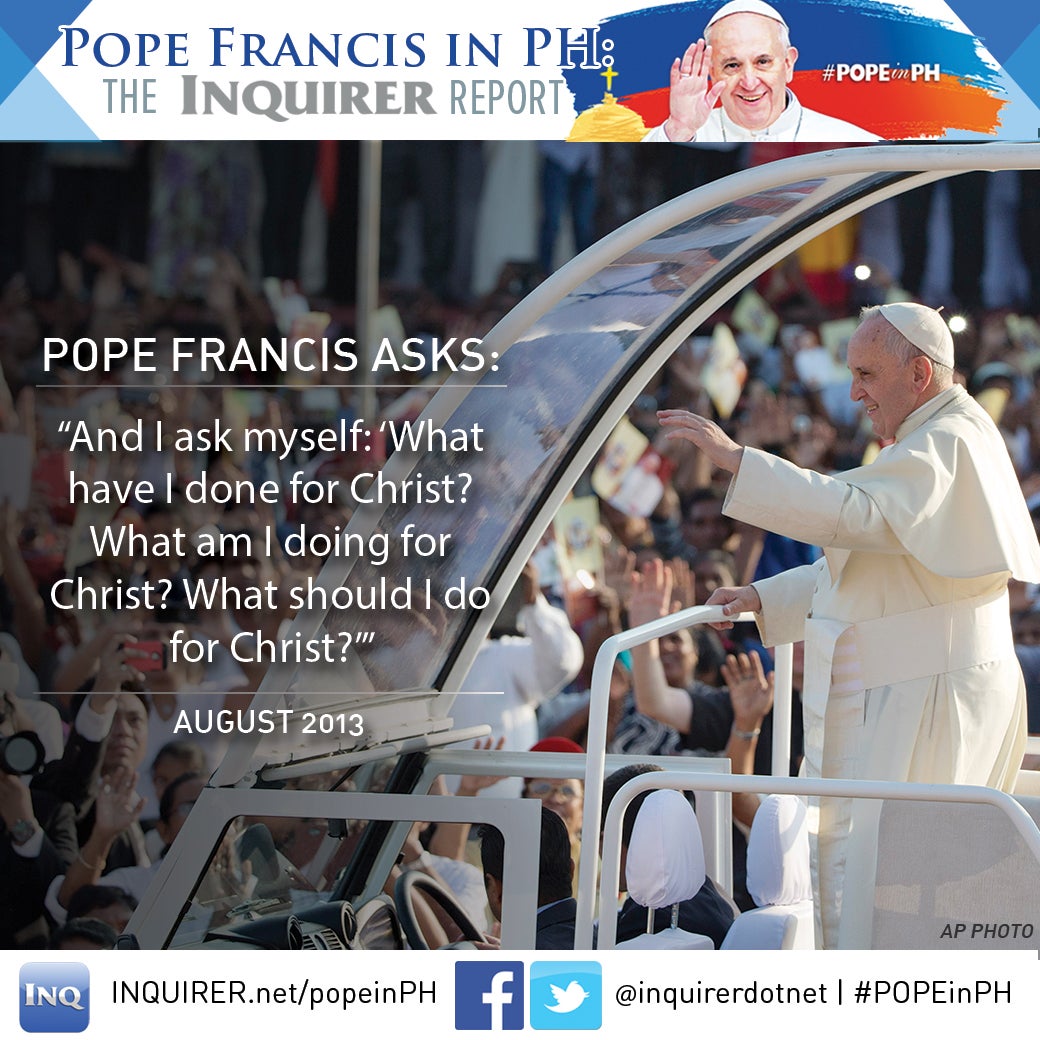 When Americana magazine asked Pope Francis about how he prefers to pray, the Pontiff said his prayers are “full of memory, of recollection,” and questions such as the one posed above.

Read more about the speeches of previous Popes who visited the Philippines here.