Pope Francis and the DongYan Bishops 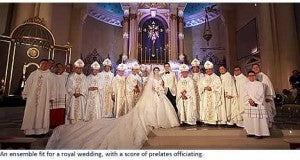 When Pope Francis visits the Philippines this week “to comfort Filipinos devastated by the typhoon and the earthquake that hit the Visayas,” he may also want to sit down with nine of his bishops and seven of his priests to explain to them that concelebrating a lavish wedding of local celebrities is not “living the Spiritual and Corporal Acts of Mercy.”

The Pope will counsel his bishops and priests that he wants them to focus their attention on “giving food to the hungry, helping build homes for the disaster victims, visiting prisoners or patients in the charity ward of hospitals, drug rehabilitation centers, homes for the elderly and orphanages”.

Pope Francis may want to remind them of what he did just 10 months ago when he fired German Bishop Franz-Peter Tebartz-van Elst (the “Bishop of Bling“) for spending lavishly on a new residence and complex in his Limburg diocese in western Germany and flying first class to attend a charity event in India while at the same time reducing salaries for staff in the name of financial austerity.  In doing so, the Pope sent a clear signal that he is willing to remove bishops who do not align with his vision of a “poor church for the poor.”

Bishops falling over themselves

The Pope may have been provided with the comments of INQUIRER columnist Ceres Doyo, who expressed shock at “the sight of nine bishops and seven priests wearing gilded raiment who officiated at the ‘royal wedding.’ I examined one ‘royal wedding’ photo and there were indeed nine miters sticking out in the air. Bishop Honesto Ongtioco of the Cubao diocese was the main celebrant, while Bishop Teodoro Bacani delivered the homily. There they were, falling all over themselves.”

For those unfamiliar with Philippine show biz, the “royal wedding” referred to were the nuptials held on December 30 at the Immaculate Concepcion Cathedral in Cubao, Quezon City between actors Dingdong Dantes and Marian Rivera who regularly appear on film and in TV soap operas on GMA-7. Just as Brad Pitt and Angelina Jolie are referred to as “Brangelina,” Dantes and Rivera are also referred to as “DongYan.”

What may be difficult for Pope Francis to swallow is the staggering cost of the “royal wedding” – P100 million pesos ($2.4 million).

For some strange reason, the “royal couple” chose December 30 as their wedding date, the anniversary of the execution of Philippine National Hero, Dr. Jose Rizal, the man who made the ultimate sacrifice for his people. What sacrifice did the DongYan couple make?

ADVERTISEMENT
Dr. Jose Rizal’s example ignored
The Philippines used to celebrate Rizal Day on December 30 (since moved to June 19) but the date may hence be known as DongYan Day. Instead of emulating Rizal’s example of self-sacrifice, it will be the DongYan’s example of self-indulgence that may be emulated.
Instead of saving money to build a home and prepare for a family, couples will be encouraged to splurge it all now. Spend it all today, don’t worry about tomorrow, it will take care of itself. Make yourself your No. 1 charity.
Couples may follow the DongYan model by also buying hundreds of thousands of flowers for the wedding and the grand reception.They may also want to spend P7 million pesos ($166,666) on a 12-foot /5-tiered cake that needs 10 people to carry. Perhaps their wedding may also similarly  grab worldwide attention and even make it to ABC News’ Good Morning America for having the “world’s largest wedding cake” as the DongYan couple did. 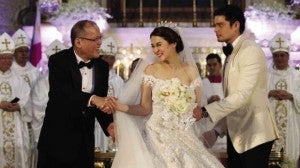 Were the people of the Philippines at all shocked by the ostentatious, if not obscene, display of wealth and extravagance in a nation where the majority of the people are still mired in grinding poverty?

Criticisms of the “royal wedding” came mostly from social media rather than from mainstream press. Most notably, getrealphilippines.com  featured the article “Why it is wrong to spend P100M on a celeb wedding in the #Philippines,” which quickly went viral.

In the article that was published on January 7, 2015, “benigno” wrote:

“The much-celebrated wedding of Filipino starlets Dingdong Dantes and Marian Rivera was baldly lavish and pointedly obnoxious. As if the event was not in-your-face enough by itself, sheepishly complicit government officers sealed off public roads in Quezon City to insulate the “royal couple and their guests from the oppressive footprint of the masses’ banal existence. Even the President of the Philippines, Benigno Simeon Aquino III, no less, blocked out a big chunk of his busy calendar to show up at this spectacle. It had Pinoy-showbiz-style “rich” written all over it. But to the same “C-D Crowd” masses who’d normally cheer the triumph of the batang yagits against the vile Spanish haciendero when watching the movies, this circus got a resounding thumbs up.”

Another social media blogger named “Ilda” wrote that the newlyweds may have violated a section of the Philippine Civil Code which states: “Thoughtless extravagance in expenses for pleasure or display during a period of acute public want or emergency may be stopped by order of the courts at the instance of any government or private charitable institutions.” 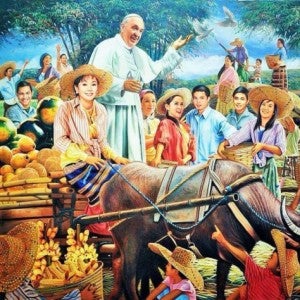 Another blogger, JLP-Law, cited the Philippine Constitution’s Sec. 1 Art. XI, which mandates that: “government officers should live modest lives.” It turns out that Dingdong Dantes is now also a government official as the 34-year-old actor was sworn in by Pres. Aquino last September as National Youth Commissioner. (He may now have to fill out a Statement of Assets Liabilities and Networth – SALN).

Pope Francis will be showered with presents from Filipinos including an oil painting (“Salubong”) by local artist Dante Hipolito of  a smiling Pope welcomed to the Philippines by the DongYan couple and other movie-TV personalities.

This is the challenge for Pope Francis. How can he promote the mission of the Catholic Church to serve the poor when his DongYan bishops and the country’s own president condone lavish lifestyles and profligate spending? How can he convince the world to send more money to help the devastated Visayan provinces when certain Filipinos are willing to spend P7 million pesos on a wedding cake?

In the immortal words of Empress Marie Antoinette, “Let them eat cake.”

(Rodel Rodis is General Counsel of the National Federation of Filipino American Associations and  a former instructor of Philippine History at San Francisco State University. He can be reached at the Law Offices of Rodel Rodis at 2429 Ocean Avenue, San Francisco, CA 94127 or by calling 415.334.7800).