Docu-maker Moore on ‘Manny’: ‘I hope people see Pacquiao in their own lives’ 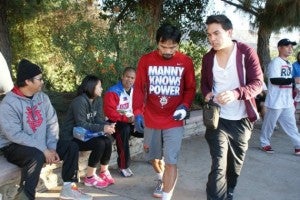 SAN FRANCISCO—Ryan Moore, writer, producer and director of “Manny” the movie, explains the passion that drove his five years of work on the life story of Manny Pacquiao, one of the most loved and respected athletes of all time.

Narrated by Academy Award nominee Liam Neeson, the 88-minute documentary traces Pacquiao’s struggles beyond the boxing ring – from a starving teenager who fought to feed his family to becoming a champion on the world stage.

Here are Excerpts from Moore’s email interview with Manila Mail.

How did this project come about?

My dream has always been to make Hollywood films about Filipino-centric stories. Living in the Philippines for several years gave me an opportunity to learn so much about my culture and heritage that it felt natural to want to share it. “Manny” is my first attempt at my dream. When I saw him fight Oscar De La Hoya, I knew I wanted to tell his story. His fearlessness and humility came from somewhere special. So that began my journey to research his life story.

What motivated you to do a movie about Pacquiao?

Manny’s the greatest fighter to ever come out of the Philippines. Some argue one of the best ever to enter the ring. Boxing aside, I wanted to tell his story because it is one of the most inspiring I’ve ever heard. What he’s been able to achieve, rising from the poorest of beginnings to setting world records never accomplished in history, is incredibly rare. I wanted to share his story with the rest of the world who haven’t heard of him.

For Filipino viewers, I wanted to give them something they haven’t seen yet by capturing his voice, and giving them access into his life. After researching him more, I discovered his life was even more colorful than I could’ve ever imagined. I could’ve made three movies about him and it wouldn’t be enough.

Tell us about your experience working with Pacquiao and Neeson.

I can describe working with Manny in so many ways: exhilarating, upsetting, challenging, requires patience.

Working with Liam Neeson was one I’ll never forget. Once he opened his mouth, I knew I made the right choice in going after him as the film’s narrator.

Neeson provides the narration in the movie, is he a preferred choice?

Absolutely. Getting Liam Neeson was a long shot, but I figured might as well try. I couldn’t have asked for a better match. He’s as passionate about boxing as much as I am – we shared so many stories about our love for the sport. And to top it off, he himself was a boxer, so for me no one knew the boxer’s struggle better than him. I felt he could deliver the lines from a place of real understanding.

What were the challenges you encountered in making the movie?

Every type imaginable. You name it – it happened.

Do you have formal training in film making?

No, I haven’t had any formal training – just trying. Trying. Then trying some more. It helps when you are able to work 20 hours a day without rest.

What do you think is the future of boxing and of Pacquiao?

It’s hard to say which direction boxing is headed. I feel like the sport is on its last breath, and the Mayweather vs Pacquiao fight is the only resuscitator that could save it. Unfortunately if that event doesn’t happen, boxing will surely continue to lose the public’s interest.

I understand that Manny will retire next year, so I’m not sure which direction his life will turn: politics, religion, basketball? Only he knows.

What are your expectations from this project?

That’s a strange question. Looking back on the five years I’ve spent on this, I guess there’s not much more to say than that this film has taken everything I could possibly give – all of my time, energy, heart and soul. In return, it’s given me the most fulfillment, heartache, growth, and happiness I could’ve ever asked for. I can’t ask for anything more than that.

By sharing Manny’s story, I hope to inspire people. I hope they see the fighter in their own lives. I think his life is such an incredible example of what someone can achieve in a lifetime if you don’t give up. I hope that will resonate with audiences. I’d also like to show the studios that there are talent and rich stories that may come out of the Philippines. I hope more of those stories get told.

What is the message of the film?

There are many messages in the film, but if I had to choose one that connects with me most about Manny, I’d say: No matter how many times you get knocked down in life, dust yourself off and get back up.

Anything we missed that you would want to include in the feature?

[To the audience], Thank you – I’m grateful that you shared 88 minutes of your life with me.