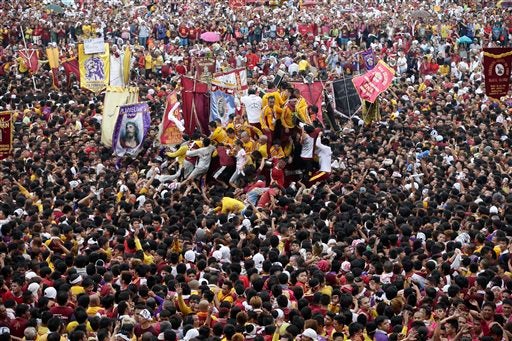 In this Jan. 9, 2015, photo, Filipino devotees carry the image of the Black Nazarene for its annual procession to celebrate its feast day in Manila. The raucous celebration drew tens of thousands of devotees which local newspapers headlined as a “dry run” for Pope Francis’ visit in Manila. With his man-of-the people reputation, Pope Francis could attract one of the biggest gatherings ever for a Pope during an open-air Mass in Rizal Park on Jan. 18. AP Photo/Bullit Marquez

MANILA, Philippines–With his man-of-the people reputation, Pope Francis could attract one of the biggest gatherings ever for a Pope during an open-air Mass in Rizal Park on Jan. 18.

The concluding Mass of Francis’ four-day visit to the Philippines may draw up to 6 million people, offering a pulsating example of Asia’s status as a dynamic growth region for the Catholic Church but also creating a security nightmare.

His trip to Asia, which begins in Sri Lanka, comes just five months after he went to South Korea, signaling the huge importance the Vatican places on Asia and its potential for more followers.

“This second trip to Asia … is a message in itself for this great continent. It is necessary to have the Pope return to this important part of the world,” Vatican spokesman Fr. Federico Lombardi said on Sunday as the 78-year-old Francis prepared for his trip.

The Philippines is one of the Church’s modern success stories, counting roughly 80 percent of the former Spanish colony’s 100 million people as Catholics, which has helped to offset waning influence in Europe and the United States.

The Pope arrives on Thursday and leaves next Monday.

Anticipation has been building for months ahead of the Pope’s trip—the fourth papal visit to the Philippines—with Francis dominating the media, billboards and sparking a merchandise frenzy.

If the crowd is as big as expected, it could surpass the 5-million turnout for the concluding Mass of Pope, now Saint, John Paul II in the same venue in January 1995. That event is regarded as the biggest ever gathering to see a Pontiff.

On Sunday, security was all that was in Malacañang’s mind. The Palace sent out an appeal for the public’s cooperation to prevent stampedes in big gatherings involving the Pope, including the Jan. 18 Mass at Rizal Park.

“Walk-through” rehearsals were held on the Palace grounds on Sunday for the Pope’s meeting with President Aquino on Friday, an event that will also gather senior government officials and foreign diplomats.

A dry run of the papal motorcade from Villamor Air Base in Pasay City will be held Monday, Communications Secretary Herminio Coloma Jr. said.

Coloma echoed Aquino’s appeal for cooperation to ensure that the Pope’s visit would be orderly.

“The government cannot do this alone,” the President had said.

Of particular concern for the government are gatherings in Rizal Park in Manila and in Tacloban City in Leyte province, where Francis will also say Mass on Saturday.

“In big gatherings, there is also a big chance that even a minor commotion could lead to a big one or even a stampede,” Coloma said on state-run radio.

The Palace urged the people to remain calm and follow instructions from ushers and marshals during the gatherings.

“The President believes that we can ensure an orderly and meaningful visit by our beloved Holy Father with the cooperation of everyone,” Coloma said.

Paul VI’s visit was marred by an assassination attempt by Bolivian painter Benjamin Mendoza. Disguised as a priest, he managed to get close to the Pontiff then stabbed him at Manila International Airport.

The Pope went on with his visit, preferring not to disclose that he had been actually wounded in the attack.

Monday’s dry run for the arrival of Pope Francis is expected to cause heavy traffic in Manila, with roads near Ninoy Aquino International Airport being closed starting at 5:45 p.m. for testing the government’s security plan.

Metropolitan Manila Development Authority (MMDA) Chairman Francis Tolentino urged travelers to be at the airport three hours before their flights’ departure in the afternoon to avoid inconvenience as a result of the rehearsal for the Pope’s arrival at Villamor Air Base in Pasay City and his motorcade’s run to his official residence at the Apostolic Nunciature on Taft Avenue in Manila.

“We will start closing roads as early as 5 p.m. to simulate the routes going outside Andrews Avenue where the papal convoy is expected to pass westbound,” Tolentino said.

He said the papal motorcade would start from Villamor Air Base, going to the domestic airport, turn right at Park ‘N’ Fly on Domestic Road, head toward Roxas Boulevard, then take Quirino Avenue to get to Taft Avenue.

The dry run, which would be conducted by the Presidential Security Group (PSG) together with the Philippine National Police (PNP) and members of the Vatican security, will also be the traffic simulation for the event during which the crowd response will be studied for necessary adjustments along the routes to be taken by the papal motorcade.

Tolentino said the dry run would also test the capacity of security cameras at the airport and along the roads leading to the nunciature.

“This will also help security experts evaluate what other necessary adjustments to be made, like the needed actual travel speed of the papal convoy,” Tolentino said.

He said the rehearsal would be done during the afternoon rush hours on the request of the Vatican, which wanted to simulate and test road conditions during the actual time of the Pope’s arrival.

The MMDA will also announce traffic management measures and road closures for the Pope’s visit, especially near University of Santo Tomas, SM Mall of Asia and Rizal Park—venues of big public events to be led by the Pontiff.

The PNP said it was 100-percent ready for the Pope’s visit. It is deploying 25,000 officers for the event.

Chief Supt. Wilben Mayor, spokesman for the PNP, said the 150,000-strong police force would be on full alert starting Monday, with all leaves canceled.

“The dry run [Monday] is for us to be able to evaluate the security preparations for the papal visit,” Mayor said.

Manila Bay areas near the venues of the papal events will be off-limits to motor boats, yachts and other seacraft starting Monday, according to the Philippine Coast Guard.

Commander Armand Balilo, spokesman for the Coast Guard, said the stretch of the bay area from Port Area in Manila to SM Mall of Asia in Pasay City had been declared “no-sail” zones until next Monday.

The Civil Aviation Authority of the Philippines (CAAP) declared “no-fly zones” over Naia during the arrival and departure of the Pope, the Apostolic Nunciature, Malacañang, Manila Cathedral, SM Mall of Asia, Tacloban airport, Cathedral of Palo in Leyte, University of Santo Tomas Grandstand and Quirino Grandstand during the papal events.

The CAAP also declared a “no-drone policy,” prohibiting the operation of drones over the venues of the papal events. Violators of the policy would be fined P300,000 to P500,000, it said.–With reports from Julie M. Aurelio, Jerry E. Esplanada and AFP

Gov’t looks to the past to bolster papal security

Disabled to have special access to Mass with Pope