Pope’s trip to Sri Lanka and Philippines: 5 things to know 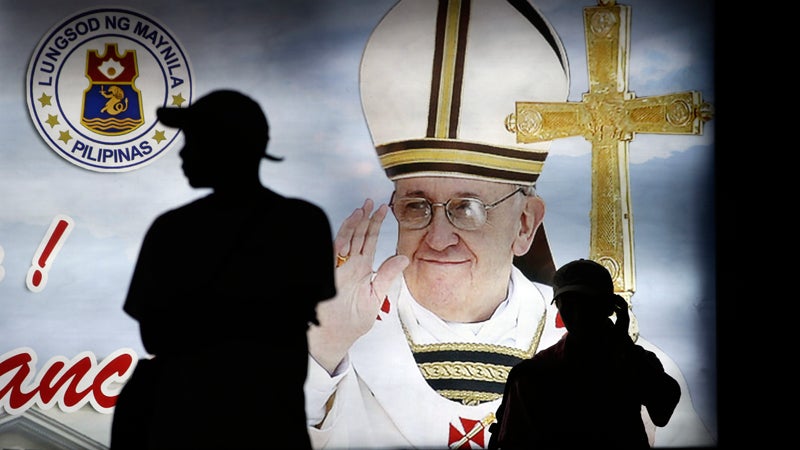 New Sri Lankan President Maithripala Sirisena, who capitalized on former President Mahinda Rajapaksa’s unpopularity among the island nation’s ethnic and religious minorities, will be on hand to welcome Francis when he arrives in the capital Colombo on Tuesday.

Francis will be bringing a message of reconciliation between the Sinhalese majority and Tamil minority and interfaith harmony after Sri Lanka’s quarter-century civil war ended in 2009 with the army’s violent crushing of the Tamil Tiger rebels.

It isn’t known if Francis will weigh in on Sri Lanka’s refusal to cooperate with a U.N. investigation into alleged war crimes in the final stages of the war. A 2011 U.N. report said up to 40,000 ethnic Tamil civilians may have been killed during the offensive, and accused both sides of committing serious human rights violations.

Here are five things to look for during Francis’ trip, split between two days in Sri Lanka and three in the Philippines.

Significantly, Francis will travel to the Tamil region of northern Sri Lanka to pray at a Christian shrine and meet with Tamil faithful. The Our Lady of Madhu shrine is revered by both Sinhalese and Tamil Catholics, providing the perfect backdrop for the pope to encourage reconciliation in a part of Sri Lanka that was devastated by the war.

“It’s a very strong gesture,” said the Rev. Bernardo Cervellera, whose Vatican-affiliated missionary news agency AsiaNews covers the Catholic Church in Asia closely. “He is going to this area where John Paul couldn’t go because of the war.”

The Catholic Church considers itself uniquely poised to be a force for unity in Sri Lanka because it counts both Sinhalese and Tamils as members. They worship together, with liturgies often alternating between the two languages, said the Rev. Prasad Harshan, a Sri Lankan doctoral student at Rome’s Pontifical Holy Cross University.

“He’s making an extra effort to go to these areas, and to see these victims,” he said. “That will be a wonderful sign of solidarity.”

Francis’ Jan. 14 canonization of Sri Lanka’s first saint, the Rev. Giuseppe Vaz, is another sign of unity: The 17th century missionary is credited with having revived the Catholic faith in the country amid persecution by Dutch colonial rulers, ministering to both Sinhalese and Tamil faithful.

When John Paul visited Sri Lanka in 1995, he too tried to bring a message of tolerance but was met with a boycott by the island nation’s Buddhist leaders, who constitute 70 percent of the population. (Hindus represent some 13 percent, Muslims 10 percent and Catholics about 7 percent, according to Vatican figures).

Buddhist representatives had been expected to attend an interfaith meeting but none showed up to protest John Paul’s criticism of the Buddhist doctrine of salvation.

Buddhist fundamentalism has only grown in the ensuing 20 years, with hard-line Buddhists waging a violent campaign against Muslims.

But two moderate Buddhist representatives are scheduled to greet Francis during an interfaith meeting on the first day of his visit.

“I don’t know if during other occasions or places there might be discordant voices from fundamentalists,” said the Vatican spokesman, the Rev. Federico Lombardi. “We’ll have to see.”

Francis has denounced the rise of religious fundamentalism in Sri Lanka and the extremists who promote a “false sense of national unity based on a single religious identity.”

During a meeting with visiting Sri Lankan bishops last May, Francis said the local church must continue to seek “partners in peace and interlocutors in dialogue” despite violence and intimidation from religious extremists.

As with any papal trip, security will be tight in both Sri Lanka and the Philippines, even for a pope who relishes plunging into crowds and driving around in open-topped cars rather than bullet-proof popemobiles.

But the concerns on the Philippine leg of the trip are not without merit, given current tensions with Islam and the rather checkered history of papal visits to the largest Roman Catholic country in Asia.

When Pope Paul VI arrived in Manila in 1970 for the first-ever papal visit, he was immediately rushed by a would-be assassin dressed as a priest who stabbed him in the gut and neck. The wounds were superficial and the attacker wrestled to the ground, but blood was drawn.

This past October, the two blood-stained vests Paul wore that day were selected as the relics used during his Vatican beatification ceremony.

When St. John Paul II visited the Philippines in January, 1995, Filipino officials briefly banned aerosol sprays, bottled gels and liquid containers of more than an ounce from departing planes because of a suspected terror plot.

Authorities later blamed the plot on Ramzi Yousef, who was convicted of masterminding the 1993 World Trade Center bombing.

That said, John Paul’s 1995 visit was perhaps more noteworthy for having set a papal milestone that no pope has since met: An estimated 5 million people turned out for John Paul’s final Mass, filling Manila’s Rizal Park and spreading out for miles in every direction.

The boulevards were so jammed that John Paul was forced to arrive at the Mass by helicopter — over an hour late — because his motorcade simply couldn’t reach the altar.

The Philippines, with a population of 100 million, is about 81 percent Catholic.

The Rev. Gregory Gaston, rector of the Pontifical Filipino College, said he expected the wildly popular Francis might surpass John Paul’s record, noting that local leaders have given workers time off so they can attend his key events, which include a Mass on Jan. 18 in the same Rizal Park as John Paul’s historic finale.

“Now the concern isn’t from terrorists, but from the people — because the people love the pope so much, there’s the chance they might mob him!” Gaston said, laughing.

Francis is expected to focus his remarks in the Philippines on issues related to families: Each day he’ll meet with families young and old, including families separated by members who have left home to find work overseas. But another issue that he’s expected to raise, at least fleetingly, is the environment.

Filipino bishops have made environmental concerns a top priority, and Francis will visit survivors of Typhoon Haiyan, which the government has held up as an example of the extreme weather patterns that may be the result of climate change.

Lombardi, the Vatican spokesman, said Francis doesn’t have a dedicated speech to the environment, but that “we can expect some references.”

Ever since he was installed as the first pope named for the nature-loving St. Francis of Assisi, Francis has called for greater attention to caring for God’s creation.

Speculation has been mounting about how far Francis will take that call in his forthcoming encyclical on ecology: Environmentalists hope that the document, expected sometime this spring, will help jump-start stalled international efforts to curb climate change.

But those who reject scientific findings that climate change is man-made are already condemning the pope for taking up the issue at all.

Maureen Mullarkey of First Things, a conservative U.S. Catholic journal, wrote in a recent blog post that Francis is “imprudent'” and “sullies his office by using demagogic formulations to bully the populace into reflexive climate action with no more substantive guide than theologized propaganda.'”

Vatican: PH is hope of Church in Asia