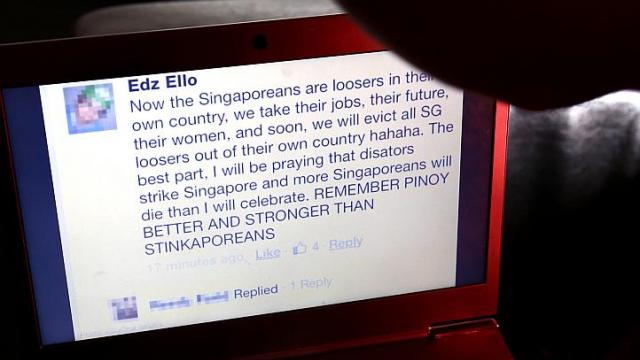 A Singapore government hospital sacked a Filipino nurse Friday for “offensive” remarks on social media, the latest in a string of foreigners dismissed from their jobs in the city-state for sparking controversy online.

Tan Tock Seng Hospital said that the decision to fire Ello Ed Mundsel Bello came after it investigated three of his posts on Facebook and Google Plus that touched upon race and religion.

It did not reveal the contents of the posts but described them as “highly irresponsible and offensive to Singapore and religion”.

“We have dismissed Mr Ello Ed Mundsel Bello from our hospital immediately for his… comments made in 2014 while in our hospital’s employment,” Tan Tock Seng said in a statement on Facebook.

“They have distressed members of the public and our hospital staff… His conduct goes against our staff values of respect, professionalism and social responsibility.”

Police are currently investigating a separate post on Bello’s Facebook page this month in which he described Singaporeans as “loosers (sic) in their own country”.

The hospital said its decision to dismiss Bello was independent of the police investigation.

Anti-immigrant sentiment is on the rise in Singapore, with many complaining that foreigners compete with them for jobs, housing, medical care as well as space on public transport.

In June last year, a Philippine independence day celebration in Singapore was scrapped after organisers faced online abuse and threats.

Furious Internet users had lashed out at Porsche-driving Casey, whose wife is a former Singapore beauty queen.

In 2012, a Malaysia-born Australian woman, Amy Cheong, was also dismissed from her job in Singapore and left the country due to angry public reaction to a racial rant she made on Facebook.

Singaporeans make up just over 60 percent of the 5.4 million population, with its low fertility rate forcing the government to rely heavily on migrant workers.

Singapore’s leading activists groups last year warned of a surge in “widespread use of racist, aggressive and militarised rhetoric” against foreigners on social networks.

Why are there so many Filipino nurses in the US?