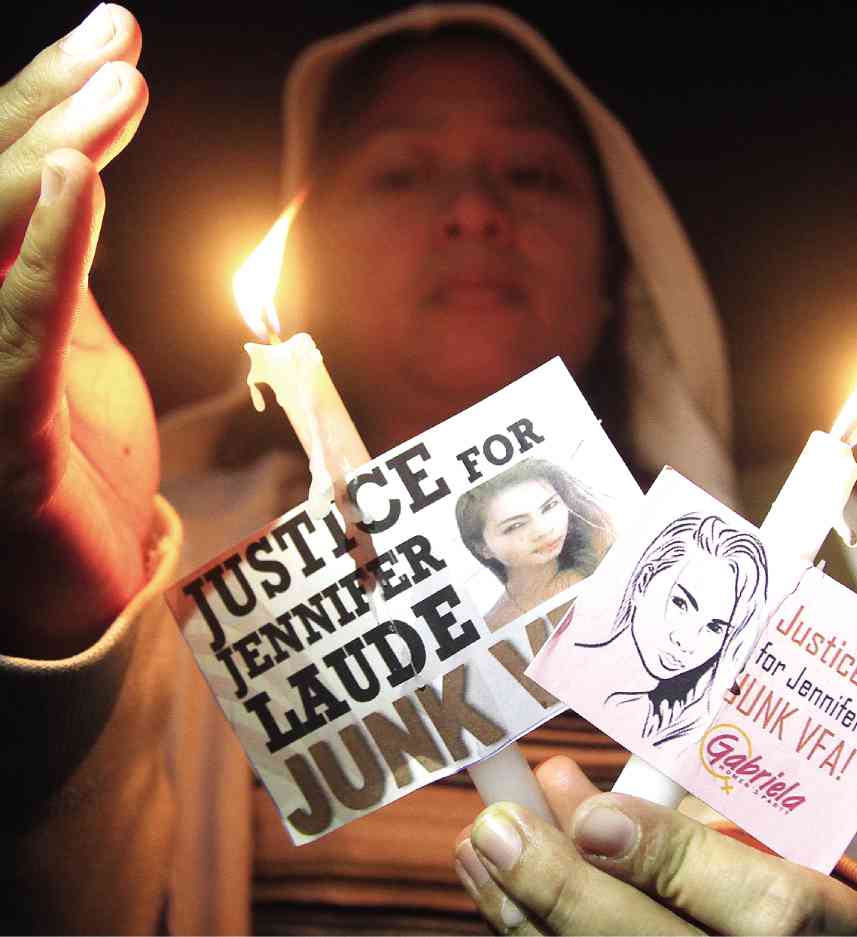 MEMBERS of the militant women’s group Gabriela light candles at a protest rally on Oct. 17, 2014, demanding Philippine custody of American soldier Joseph Scott Pemberton, who is facing a murder case for the killing of Filipino transgender Jennifer Laude. MARIANNE BERMUDEZ

OLONGAPO CITY—The public prosecutors in the murder case against US Marine Lance Cpl. Joseph Scott Pemberton on Monday filed a motion for inhibition against the judge hearing the case after it was learned that the judge and one of the defense lawyers are classmates in law school.

The prosecutors also said Jabalde had put them in a “wait and see” situation since the case was filed in court on Dec. 15.

Pemberton is facing a murder charge for the death of transgender Jeffrey “Jennifer” Laude inside a motel here on Oct. 11.

“It became clear to the prosecution that the relationship between [Jabalde] and [Flores]—that of being classmates in law school—has tainted the honorable presiding judge’s transparency and neutrality in the conduct of the proceedings,” the motion said.

The prosecutors said Jabalde conducted a court proceeding in their absence when Pemberton appeared in court on Dec. 19. They said they found Jabalde talking with Pemberton and Flores inside the courtroom before the prosecutors could join the proceeding.

“This scene immediately alarmed the prosecution giving it as it does an impression that a proceeding with respect to the case was already being conducted without the presence of any public prosecutor,” they said in their 12-page motion.

Jabalde declined to comment on the motion. The Inquirer tried but failed to contact Flores on Monday. However, in a previous hearing, Flores acknowledged that she and Jabalde were law classmates.

The prosecutors also said that the failure of Jabalde to arraign Pemberton had allowed the soldier’s lawyers to file a petition for review in the Department of Justice. They said Jabalde could have dismissed Pemberton’s petition for review had he been arraigned when he appeared in court on Dec. 19.

The prosecutors said they were made to wait for 25 minutes in the courtroom during the appearance of Pemberton and were not informed that Jabalde would no longer arraign the soldier.

“The prosecution was immediately placed on a wait and see stance—a situation which could have been easily avoided by a ‘yes’ or ‘no’ reply—and doubt has dawned upon the transparency with which the proceedings will be conducted by the honorable presiding judge,” they said.