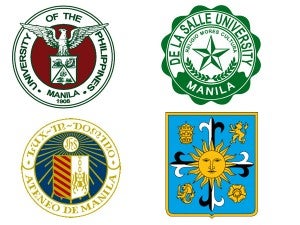 None of the country’s known prime universities made it to the league of 300 in the latest QS World University Rankings released Monday, with four top schools sliding farther than their positions last year.

While still the top Filipino university on the list, the University of the Philippines was ranked 332, falling 18 spots from the 314th place last year.

Two other universities placed farther down the list, with the De La Salle University dropping from the 451-500 bracket last year to the 551-600 bracket this year.

The University of Santo Tomas left the top 600 list, ranking within the 601+ bracket from the 551-600 bracket last year.

“This may come as a disappointment, but possibly not a surprise as thousands of students recently took to the streets in protest of the government’s budget cuts in higher education,” QS noted in a statement sent to the Philippine Daily Inquirer.

The Aquino administration last year cut subsidy to state colleges and universities, prompting institutions to raise tuition and other fees.

Student groups have been protesting budget cuts contending that the move has further limited access to quality education among the poor.

John O’Leary, QS Advisory Board Member, noted that nations like Germany, Japan and South Korea have kept their universities — among them state-funded — within the top bracket through investing in. education. The contrary has happened to countries that have less.

“The [rankings] give a clear illustration of the link between investment and results in higher education,” O’Leary said.

“… [C]ountries that have cut funding for higher education have seen a gradual decline in the international standing of their universities,” he said.

Cambridge University in the United Kingdom topped the survey for the second consecutive year, edging out other Ivy League schools including Harvard, MIT, Yale and Oxford, QS said.

QS surveyed 32,000 academics and 16,000 employers this year, the “largest of its kind ever conducted” according to the organization.

Duterte to Gordon: Inciting to sedition? File a case and I’ll sue you too