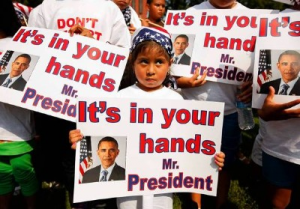 LOS ANGELES — After Pres. Obama announced Executive Action (EA) on November 20, 2014, many people asked whether a new Republican Congress can or will attempt to block those measures, especially Deferred Action for Childhood Arrivals (DACA) and Deferred Action for Parental Accountability (DAPA).

In my opinion, once these programs are implemented, the Republicans cannot or will not block DACA or DAPA for the following reasons:

Pres. Obama has veto power.  If Congress passes a bill the president does not agree with, the president can veto that bill.  President Obama has already indicated he would veto any bill limiting his executive action. For Congress to pass a bill over a presidential veto, two thirds of both the House and Senate must vote against the president. Historically, less than 10% of all bills vetoed by a president have been overridden by Congress.

President Obama would not sign into law a bill that limits presidential power. Any bill presented by a new Republican Congress would effectively state that Pres. Obama did not have the power or authority to exercise executive action. No president will sign into law a bill that says he does not have power, or which would put limitations on that power.

Pres. Obama has already obtained legal opinions justifying his use of executive action. Before President Obama announced his executive action, he already obtained written opinions from legal scholars, law professors, and his General Counsel, that he has the legal right and authority to implement DACA and DAPA. Therefore, there is a legal basis for what he did, and confirmation that his EA was within the scope of his powers and authority.

We will lose billions of dollars in filing fees. The filing fees for DACA and DAPA would be about $465 per applicant. It is estimated there are at least 4 million parents who may be potentially eligible for DAPA and millions more young people who will be eligible for the expanded version of DACA [which eliminates the upper age limit (of being under 31 years old), and moves the qualifying date of entry into the US from June 2007 to January 2010, so more young people will be eligible]. If all those millions of people file applications, that will result in billions of dollars of filing fees.

We will lose billions of dollars in taxes. DACA and DAPA will enable qualified applicants to obtain work authorization, SS number, find work, and pay taxes, instead of having to “work under the table.” Therefore, these programs could generate billions of dollars of additional tax revenue.

Where will the Republicans send these people and what happens to their children? The Republicans cannot just pick up people off the street and load them onto trains. Where do Republicans expect to send these people? Into Mexico? Or will there be a massive airlift from our airports with cargo planes packed with people? What happens to their American citizen children? Do they go to orphanages or foster care? The whole thought of a mass deportation of millions of parents of US citizens and green card holders is unrealistic and cruel.

It will cost billions of dollars to deport/remove all these people. In order for the Republicans to deport or remove these people, they will have to put them in deportation/removal proceedings, so the people can present their defenses and have their “day in court.” There are not enough judges or courtrooms (or budget) to handle this mass deportation. Many of the people have defenses or other forms of relief. If they had been in the US for over 10 years, have good moral character, and a US citizen or green card holder child, parent, or spouse, they could possibly qualify for “cancellation of removal.”

The Republicans will lose in the 2016 elections. Republican opposition to Obama’s executive action will alienate the Latino and immigrant communities, activate/energize the pro-immigration base of the Democratic Party, who would likely vote out the Republicans in 2016.

I favor this executive action and hope that Congress would also finally pass comprehensive immigration reform, so the President does not need to do this, because of Congressional inaction.