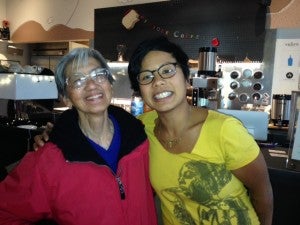 SAN FRANCISCO — When JoEllen Depakakibo was a student at De Paul University in Chicago, she used to study at Intelligentsia Coffee, Lakeview, because she loved the convivial environment.

She ended up working there while going to college until she graduated with a degree in communications in 2005, allowing her to immerse in the workings of the specialty coffee industry.

Less than a decade later, having earned an impressive cafe cred and valuable contacts in the business, Depakakibo is now the owner of Pinhole Coffee in San Francisco, which is fast becoming a favorite gathering place for Bernal Heights’ residents.

Depakakibo’s love for the café business increased when she moved to San Francisco in 2006 and got a job at Blue Bottle during its beginnings, when it had only a few employees and had just opened its brick and mortar store in Hayes Valley. She worked at different outlets as barista and manager, allowing her to further train in all facets of the trade.

Now considered one of the top coffee roasters and retailers in the Bay Area, Blue Bottle moved her to New York in 2012 for a year to begin its expansion in that competitive market. She credits this assignment with helping her grow as a person.

“The city pushed me to become direct and outspoken and more independent. I also learned to get up quickly whenever I felt kicked down,” she said.

Her boosted self-confidence led her to start dreaming of becoming an entrepreneur. After New York, and while still employed full time at Blue Bottle, she started looking into spaces for a café in San Francisco. She came across an opportunity in Bernal Heights, south of the Mission District that she had never explored. While walking through hilly and scenic Bernal, which has been named “the hottest neighborhood in America in 2014” by Redfin, a popular real estate website, she had an epiphany. 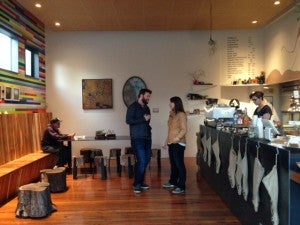 “It was the type of neighborhood I was looking for, a mix of the old and modern, giving me the feel of the 1950s,” Depakakibo related.

“Here, you see amazing people walking and talking to each other,” she added. She politely excused herself from our interview to greet a woman walking by: “Hey, where’s your doggie? Want some water, good for hydration.” She welcomed a couple visiting from Ventura, California, and chatted with them about good cafes in that city.

Bernal Heights has had its share of woes because of the rapid gentrification occuring in San Francisco. Before the tech surge, it was a more diverse mix of working class residents, artists and activists. Buck Bagot one of the founders of the Occupy Bernal Movement, was quoted in a piece in Bernalwood blog, saying, “When I moved here, every house on my block had a different ethnicity. There were Latinos, Blacks, American Indians, Samoans and Filipinos. … Now they’re all gone.”

Members of the Occupy Bernal movement are currently fighting to save homes from foreclosures and maintain diversity in the neighborhood. When Depakakibo chose Bernal Heights for her venture, she was not yet aware of the history of Filipinos in the neighborhood.

The late Filipino American Bill Sorro, a longtime resident and beloved civil rights and housing activist, was one of the leaders of the movement in the 1970s that struggled for nine years to prevent the eviction of low-income senior citizens, including Filipinos, from the International Hotel in San Francisco’s Chinatown. (The International Hotel Manilatown Center now stands on the site, a testament to the early organizing for affordable housing rights in the city.)

The number of Filipinos in Bernal Heights spiked starting in the late 1960s and early 1970s because of the passage of the Immigration and Nationality Act of 1965, which paved the way for immigrants from Asia, Africa and the Middle East to become permanent residents in the U.S. 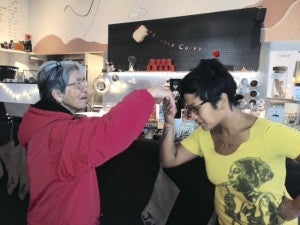 Gloria Carvajal, one of the beneficiaries of the law, has lived in the neighborhood since she arrived in the US in 1968 and worked for Pacific Bell Telephone Company (now AT&T) for almost 30 years until her early retirement in 1996. She was active in Saint Kevin Church’s close-knit Fil-Am Association, which no longer exists, but she continues to keep in touch and care for housebound members of the group.

Tess Uriza-Holthe, the author of “When the Elephants Dance,” a bestselling novel about the Second World War in the Philippines, was raised in Bernal Heights. Like Depakakibo, she is also the daughter of Filipino immigrants. Bernal Heights is a perfect match for the Pinhole Coffee owner’s passion for community building. Years of working in coffee shops have given her a better appreciation for connecting with people, which she wanted to reflect in her café through the design, décor, ambiance and quality of her products.

Architects from bcooperative, which focuses on small residential and commercial projects, helped Depakakibo conceptualize Pinhole’s space, based on her vision. She wanted a mix of cool and warm, so they kept the original douglas fir floor from the former 1890s butcher shop that used to occupy the site and tore out the front, replacing it with green penny tiles.

Instead of chairs, they built benches along one side of the cafe to allow customers to interact more freely with each other. Leah Rosenberg, an artist and friend who lives in the neighborhood, offered to paint strips of bright rainbow colors on one wall. The owner’s brother, Joey Depakakibo, flew in from Chicago for a week to do the artwork behind the counter.  She has also carefully selected the purveyors of the products she carries.

To satisfy her customers’ sweet tooth, Depakakibo procures pastries from Marla Bakery in Richmond, and Little Bee, a few blocks down from her café and, of course, she devotes major attention to the artisanal coffee choices. She serves a rotation of selections that changes every two months. Currently, she uses Verve from Santa Cruz for espresso, Blue Bottle for quick drip and Tandem from Portland, Maine for pour over, all made individually to bring out the best flavor in coffee.

As an entrepreneur, Depakakibo aims to make her endeavor last and be financially profitable, a goal buttressed by the rise in the demand for specialty coffee. The Yahoo online article of August 15, 2014 by Mark Taylor quoted Ric Rhinehart, the executive director of the Specialty Coffee Association of America based in California, who said that coffee is a “remarkably recession-proof product” and Americans “aren’t necessarily drinking more coffee, but are changing where they drink coffee and the quality of the coffee they’re consuming.”

The Chicago transplant, however, does not lose sight of her other goals to make Pinhole become part of the community and a host to people’s talents. She has featured painters and ceramicists and shown movies during Halloween and plans to host pop-up dinners, food trucks and literary readings by local poets and writers.

One afternoon, Carvajal went to Pinhole to have a cup of java, and as soon as Depakakibo saw her, she bowed, took Carvajal’s hand, and put it against her forehead, a sign of respect for elders among Filipinos. In turn, Carvajal gave her a blessing and welcomed her to the neighborhood, immediately proceeding to tell the young Pinay about Filipinos living and working in Bernal Heights. While decades separated their ages, respect for an age-old tradition and love for coffee and community bonded them instantly.