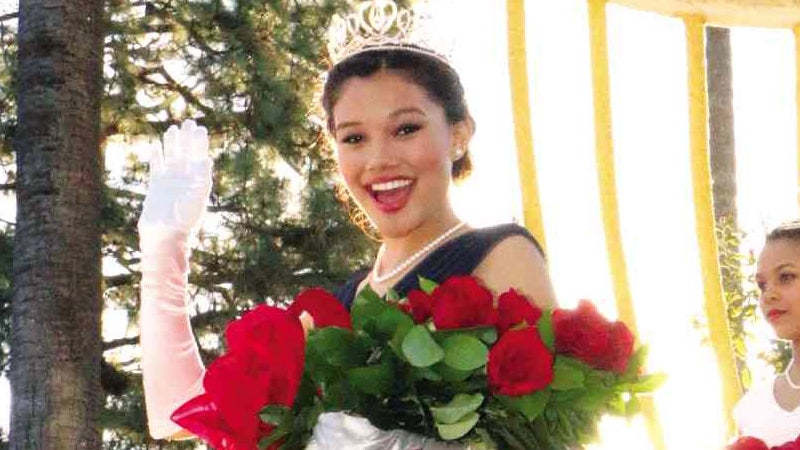 Fil-Am Rose Gabrielle Current, 17, blooms along the route of the traditional Rose Bowl Parade during the 126th Tournament of Roses in Pasadena, California, viewed by millions around the world. NIMFA RUEDA

PASADENA—Wearing the Rose Princess crown, a Filipino-American teenager waved to hundreds of thousands of spectators lining the route of the spectacular 126th Tournament of Roses Parade in Pasadena, California, on New Year’s Day.

“I’m very proud to represent the Filipino-American community,” said Gabrielle Current, one of the seven young women selected to serve as ambassadors for the Rose Parade and Rose Bowl events viewed by tens of millions around the world.

Current, 17, was selected from nearly a thousand young women who competed for a spot in the 2015 Tournament of Roses Royal Court.

“It feels amazing to be a part of this magnificent event,” she told the Inquirer.

A riderless horse represented grand marshal Louis Zamperini, a World War II hero and former Olympian, who died in July. Zamperini is the subject of a best-selling book and the movie “Unbroken,” directed by Angelina Jolie and now in theaters.

Cast members from “The Love Boat” rode on a Princess Cruises float, one of 39 that paraded down the 5.5-mile route on Colorado Boulevard.

After the parade, Current and the rest of the Royal Court were presented at the Rose Bowl, where more than 90,000 watched the college football playoff featuring Oregon and Florida State.

The event in California is watched by an estimated 56 million TV viewers across the United States and 28 million from 174 countries around the world. An estimated 17 million viewers switched to ESPN afterward to catch the Rose Bowl game.

Current recalls watching the Rose Parade for the first time when she was about six years old and being enthralled by the Rose Princesses. “I knew then I wanted to be a part of this beautiful event,” she said.

More than just a dream come true, being a Rose Princess has also been a source of pride for Current as a member of the Pasadena community.

“It’s an honor for me to be able to serve my community, where I grew up,” said Current, who spent the three months leading up to the New Year’s Day parade attending 125 events as a Tournament ambassador.

It’s a grueling schedule for any teen, and when added to Current’s commitments as a senior at Flintridge Sacred Heart Academy—an all-girls Catholic high school—a student leader and an aspiring musical artist, it can get overwhelming.

“At one point, I wasn’t sure if I could handle it all, so my family and I prayed about it,” she said. “We left it in God’s hands.”

Current said she is also very grateful for the support of her mother Kathy Castillo-Current, a former beauty queen, and her father Jerry, who was the first Mr. Asia-USA.

The members of the Royal Court were chosen based on a number of criteria, including poise, personality, public speaking ability, academic achievement and community and school involvement.

She is a member of the National Honor Society and the California Scholarship Federation. As president of Vivace & Friends, she produced a benefit concert that raised $5,000 for Youth Orchestra Los Angeles.

She studies classical voice at the prestigious Colburn School of Music in Los Angeles. She plans to major in music management.

Current loves musical theater and has performed in Phantom of the Opera, Titanic, God Spell, West Side Story, 9 to 5, and Xanadu.

Also a model, she has been featured in many ad campaigns, including those for Pottery Barn, Macy’s, Target, Ross and Kohls.