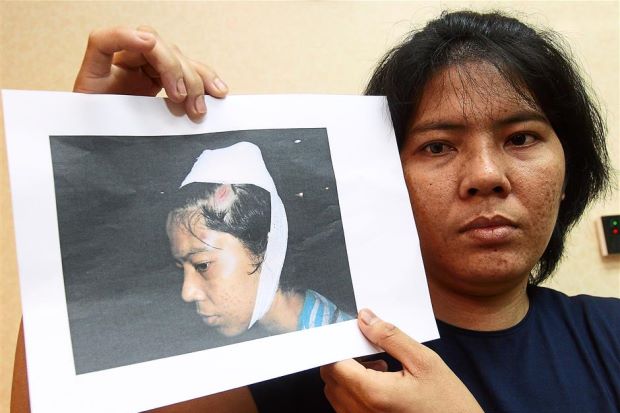 PROOF OF ABUSE: Nenita showing a photograph of her taken at the hospital after she was rescued by policemen. (The Star Online-Asia News Network)

MANILA, Philippines—The Philippine Embassy in Malaysia on Wednesday said a Filipino domestic helper was “one step closer” to attaining justice after her employer admitted in court that she had hit her.

“The admission of guilt by Nenita Elcamel’s employer brings her one step closer to attaining justice for the physical and mental abuse she suffered,” the embassy in Kuala Lumpur said.

Because of this action by her Malaysian employer, the embassy headed by Ambassador Eduardo Malaya was optimistic Elcamel would be awarded “full compensatory damages.”

“There is no justification for the infliction of cruelty and violence against a fellow human being irrespective of status or line of work,” the embassy said in a statement.

It said Elcamel’s former employer pleaded guilty last week in the Petaling Jaya Magistrate’s court to hitting the Filipino. The court ordered her to be jailed for a day and to pay a fine of 4,000 Malaysian ringgit or about P52,800.

Elcamel was rescued by police in November when neighbors reported to authorities the abuse and maltreatment she was suffering.—Christine O. Avendaño