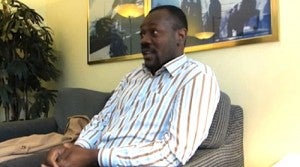 Yves Pierre is one of thousands of new immigrants to Germany, which is facing massive demographic shifts now reshaping the European nation. See a video of Pierre discussing his experiences in Berlin. BERLIN, Germany — Yves Pierre, 34, traveled around the world for over a decade looking for a land of opportunity — a place to live where he could have steady work in order to support his family back in Haiti. When he found a job with a multinational cruise line based in Berlin, he embraced Germany as his new home.

BERLIN, Germany — Yves Pierre, 34, traveled around the world for over a decade looking for a land of opportunity — a place to live where he could have steady work in order to support his family back in Haiti. When he found a job with a multinational cruise line based in Berlin, he embraced Germany as his new home.

He’s now been here for five years. He has an apartment in a neighborhood he loves, and German friends he hangs out with on weekends.

“I really like it here – the social life, the arts,” says Pierre, who speaks five languages, including German. “I find it [very] international.”

He also sees career opportunities. He just established a small fashion company, and he dreams of expanding to New York and Paris. But wherever his work may take him, he says, he knows that he wants Berlin to remain his home.

Facing an enormous demographic shift, with an aging population and a low birthrate, Germany is taking new measures to open its doors to immigrants like Pierre, with the hope that they’ll bolster the workforce and help maintain Germany’s status as an economic powerhouse within the European Union.

Two years ago, the German government enacted the “blue card” system for non-EU nationals who are willing to stay and live permanently in Germany to replenish its dwindling labor force. Similar to a green card in the United States, an immigrant is eligible to apply for a blue card if he or she has a confirmed job offer or a valid work contract with a sponsoring employer, holds a university degree, and earns an annual salary of at least 35,000 euros.

Pierre holds a blue card and is currently applying for German citizenship. 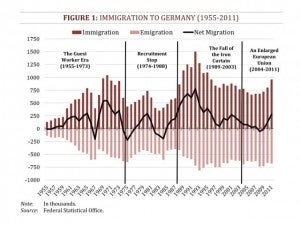 Der Spiegel recently reported that over half a million immigrants with college degrees came to Germany in the first half of 2012 – the largest number since the 1990s. But this may not be enough. According to a 2011 study conducted by the Nuremburg-based Institute for Employment Research, given the current shortage of skilled labor and the shrinking German population, the country’s labor force is expected to drop by almost 7 million by 2025.

The study estimated that Germany would need to add about 400,000 skilled immigrants to its workforce every year to maintain its economic strength.

“Some of my friends have asked me, ‘Why do you want to work in Berlin? Why do you want to live in Germany?’“ Pierre says. “[But] my life here has been great. I don’t feel different because of the color of my skin. For me, [Berlin] is a small world of communities where you find a lot of welcoming people.”

Other immigrants, though, haven’t felt as welcome as Pierre has.

In the early 1970s, the German economy collapsed and the government froze recruitment for foreign guest workers, known as gasterbeiter, mostly from neighboring European countries. But the effort didn’t quite achieve its aims. Many guest workers who had already entered the country not only maintained their residence permits, but also brought their families into the country to be with them.

So, despite Germany’s resistance to immigration at the time, there was a major influx of immigrants who joined their families that were already in the country. Germany became the world’s third largest immigrant country in the 1990s, after the U.S. and Russia, with almost 11 million immigrants.

To date, according to the German Federal Statistical Office, about 15 percent of the German population has a migrant background. A large number of them are second- and third-generation offspring of former guest workers. Of these, 8 million are German citizens.

And, in recent years, the number of refugees who flee wars, famine, and political unrest in their home countries has increased. In 2012 alone, the number of refugee applications rose to over 100,000. The majority are from Syria, though about a fifth come from the Balkan states, such as Serbia and Bosnia.

But as German cities struggle to find housing for these refugees, others look on in horror at what they see as a growing burden on the government that is at the same time fueling the “Islamisation” of their home country.

With the steady growth of immigrant communities, the question of what constitutes a true German identity has become yet more sensitive and contentious.

“It’s easy to feel like an outsider,” says Gokai Dobak, a 32-year-old German who was born and raised in Berlin but has a Turkish background. He says that while few would openly say it, many Germans don’t consider him to be a fellow German because of his ethnic background.

Dobak drives a taxi five days a week to support his wife and their five-year-old daughter. He says that he got married early and did not finish college.

“Here, they will always think of me as a Turk. It sounds crazy if I say ‘I am German,’” he says. “[But] when my family visits Istanbul, our relatives there do not consider me like one of them.”

Dobak says that he and his wife decided to send their daughter to a school where the students are primarily from migrant backgrounds, hoping that in this way she will feel less isolated. “[But] I am afraid she won’t be able to speak Turkish anymore,” he says.

In Cologne, Tanchanok Blattman, 55, works as a maid for a prestigious hotel that faces the iconic Cologne Cathedral. “It can be difficult here,” she says, almost in a whisper, standing next to a housekeeping cart in a hallway.

After emigrating from Thailand in 1996 to join her younger sister, she studied German in a government-subsidized language school for eight hours a day. She is now married to a German and they have a son who is in college.

“Sometimes I get a different treatment, but Germans are good people,” she says.

In recent years, says Honey Deihimi, a federal commissioner for migration, refugees, and integration, millions of euros have been allocated for services like language courses and employment programs.

“The majority of [immigrant] Germans go into labor, they pay taxes, they contribute to the social system,” Deihimi says.

She notes that it’s flawed to assume that refugees are not highly skilled. The majority of Syrian refugees, she says, are highly educated, many of them doctors.

“I am always optimistic,” she says. “If the nation becomes a more welcoming state, we can increase the current positive environment towards integration in this country.”

According to Dr. Ulf Rinne, deputy director of research at the Institute for the Study of Labor, Germany is more than ready to become an ethnically diverse nation “because it is such a nation already.” But, he says, “Discrimination is still relevant. For example, foreign-sounding names matter in access to jobs.”

Yves Pierre, for his part, has found not only material success, but also happiness and acceptance in Berlin.

“This is the city and country where I want my 10-year-old son to grow up,” he says. “I have already started processing his papers so we will be reunited again. I would like him to be a Haitian-German someday.”

This story was produced as part of the RIAS and RTDNA German/American Exchange Fellowship for Journalists in October 2014.