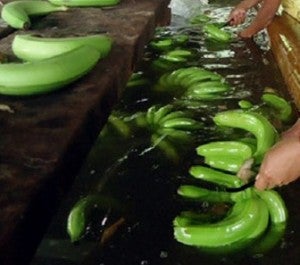 MANILA, Philippines–The United Nations and international experts have called for support to arrest a plant disease that is ravaging banana farms worldwide, including 6,000 hectares in the Philippines.

According to the Food and Agriculture Organization, overall funding needs to prevent the rapid spread of the Fusarium wilt disease that attacks the Cavendish variety is estimated at $47 million.

A strain of the fungus, called Tropical Race 4 (TR4), is considered a top threat to economic welfare and food security in developing countries as it causes wilting and mass death of banana plants.