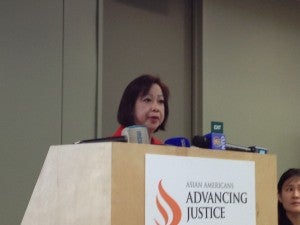 LOS ANGELES — In the wake of President Obama’s executive action on immigration, an undocumented mother from the Philippines has joined the campaign to encourage others like her to apply for their driver’s license beginning January 1, 2015 regardless of their immigration status.

“I have been driving for 11 years since I came to this country in 2002.  Since then no one knew that I have been driving without a California license,” Maddie Villanueva told a group of Asian American Pacific press members December 18 at a conference sponsored by Advancing Justice-LA.

Under AB 60 Drivers’ License law, undocumented Californians can receive a non-commercial driver’s license from the California Department of Motor Vehicles (DMV) by completing the DL-44 application form, paying the standard $33 application fee and passing both the knowledge and behind-the-wheel tests. Under the law, AB 60 driver’s license recipients are protected from discrimination by law enforcement agencies.

“And like Jose Antonio Vargas [a Filipino Pulitzer prize winner who in 2012 disclosed his undocumented status and has become one of the recognized leaders for the passage of DACA], I am also living with deception because I was pretending I had the legal right to drive in California when in fact I don’t. I was putting my own life and the lives of my two precious daughters to the worst risk that no one could imagine,” Villanueva told the press.

In an interview with INQUIRER.net, the mother of two daughters said she and her children came to the US with an H-4 visa. An H-4 visa is issued by the US Citizenship and Immigration Services (USCIS) to immediate family members (spouse and children under 21 years of age) of temporary workers with H1B non-immigrant visa, which allows US companies to employ foreign workers in specialty occupations that require theoretical or technical skills.

Villanueva said that in the process of applying for permanent residency, some problems came up with their visas, and the immigration office sent them a letter asking them to leave the country.

She decided to stay, driven by similar reasons that many Filipino parents to leave behind an economically unstable home country for the sake of their children. She managed to get work to support her children but said “staying in the shadows” had been such an ordeal.

“I personally admit that I should not be driving without my driver’s license, but people need to understand that an undocumented mother has no other choice to survive, and that driving without a license is a risk worth taking,” she explained.

“Had I been not driving at all, my daughters would not have been able to pursue their perspective dreams,” she added.   One of her daughters is currently enrolled at University of California in Berkeley, according to a Facebook post. Another one studied at UC Santa Barbara.

“If I ever need to go to LA, going to a job interview, or to take my two daughters to do any important activities I would take the side streets, no matter how long it may take to get to my destination. It’s my strategy to hide from a police officer,” Villanueva continued. “I don’t like driving on the freeway because I feel that I am more vulnerable to be pulled over by the police.”

She admitted that the most vulnerable risk she carried for 11 years was being undocumented. She decided to come out to tell her story because she wants to share a few of the many hurdles and obstacles that an undocumented mother faces constantly.

Villanueva added that AB60 is “one step to fulfilling our dream as undocumented, one step to driving without fear, without vulnerable risk, and to drive with peace of mind.”