Life on streets is difficult, but free, says anthropologist 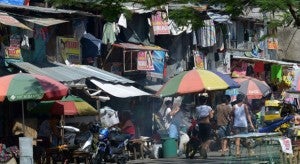 Though many would look down on the homeless, for those living on the streets this way of life may be difficult but it comes with a kind of freedom, Thammasat University anthropologist Boonlert Visetprecha said.

Boonlert spent a while living with and learning from homeless people in Bangkok as part of his fieldwork several years ago, and then he spent 15 months – from January 2013 – living on the streets in Manila as part of his doctoral dissertation in anthropology for the University of Wisconsin.

There are about 3,000 homeless people in Bangkok but as many as 100,000 in Manila, Boonlert said in his presentation at Chulalongkorn University’s faculty of political science yesterday. The event was organized by the university’s Master of Arts in International Studies Program.

He said that while 7 per cent of the population in the Philippines are unemployed, as many as 20 percent are underemployed.

With absurdly low wages – which could be less than Bt100 per day for uneducated people over the age of 40 – people find it difficult to cover their daily expenses and end up becoming homeless in Manila, Boonlert said. Former convicts also find it difficult to land a job and find themselves without a roof over their heads.

Despite the fact that some homeless people insist that living on the streets is a carefree existence, Boonlert noticed that most of them failed to recognize the structural violence that resulted from extreme inequality.

Boonlert said Thailand fared far better in terms of having a considerably smaller number of homeless people thanks to low unemployment rates. “In Thailand, things have to become very extreme for families to live on the streets.”

He added that he was reluctant to propose that the government step in to help the homeless as the powers that be might use this as a tool to control these people. “I have tried to provide a space for them to speak.”

He said that over the 15 months he spent sleeping rough on the streets of Manila, his motives were questioned, while some just thought he had lost all his money gambling.

“Homeless is a way of life for some,” Boonlert concluded. “There’s a sense of ‘fun’ in there, both in Thailand and the Philippines. They say life is difficult, but they are happy.”