American Private First Class Joseph Scott Pemberton appeared before the Olongapo Regional Trial Court with his lawyer on Friday to file a motion seeking for the reduction of his murder rap to homicide. Video courtesy of Atty. Harry Roque, one of Jeffrey “Jennifer’s” Laude legal counsels

Pemberton was escorted by American and Filipino security forces to the Hall of Justice here on Friday morning, where he was booked. Authorities took the 19-year-old Marine’s fingerprints and his mugshots, and his arrest was formally documented.

But Pemberton was not arraigned as earlier reported. 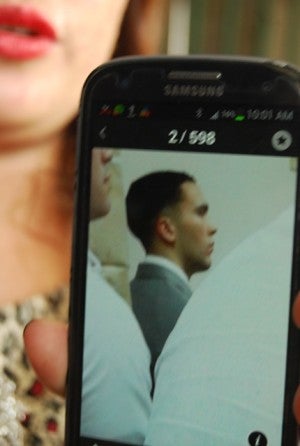 His lawyers have asked for the suspension of proceedings in order to argue a reduction of the charges from murder to homicide.

“You can see the kind of cruelty [Laude] endured, the injuries she sustained,” De los Santos said. “We believe we have a strong case.”

The court said it would hear Pemberton’s pleadings on Monday, Dec. 22. No schedule has been set for his arraignment, a procedure where the subject of a criminal complaint will plead guilty or innocent to the charges laid out before him.

The convoy that carried Pemberton to the court building arrived at 5 a.m. under tight security around the premises where he was scheduled to face Judge Roline Ginez-Jabalde of the Regional Trial Court Branch 74.

Officials from the US Naval Forces and the US Embassy in Manila started arriving minutes after Pemberton’s convoy entered the Hall of Justice compound.

Laude’s sister, Marilou, arrived at the court at 8:30 a.m., accompanied by lawyer Virgie Suarez, one of the counsels of the Laude family.

Reporters were barred from covering the proceedings. All doors and entrances leading to the courtroom had been blocked.

At least 20 policemen had been stationed at the doors and along corridors leading to Jabalde’s sala while about 100 policemen secured the Justice Hall compound.

Lawyer John Aquino, clerk of court, spoke to reporters as the arraignment began at 8:30 a.m., saying reporters will be briefed of the proceedings after Pemberton’s appearance in court.

IN THE STILL OF THE NIGHT American and Filipino officials drove American marine Lance Cpl. Joseph Scott Pemberton from his detention facility in Camp Aguinaldo to the Olongapo City courthouse early Friday morning (Dec. 19), where he surrendered to the judge hearing murder charges filed against him for the slaying of Filipino transgender Jeffrey “Jennifer” Laude. PHOTO BY ALLAN MACATUNO/Inquirer Central Luzon

Suarez said the Laude family was thankful that they will finally see Pemberton, the foreigner who witnesses identified as Laude’s companion when they checked into the Celzone Lodge here on Oct. 11.

Laude was found dead after Pemberton left the motel room.

Suarez insisted that Pemberton, who is detained in a facility jointly managed by the Philippine and American governments in the Armed Forces of the Philippines headquarters in Metro Manila, should be detained in the Olongapo City jail, noting that the crime was committed in this city.

As of posting, Pemberton is being transferred back to Camp Aguinaldo.