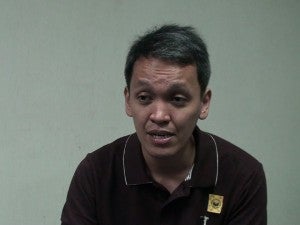 “The US embassy in Manila insists on keeping Pemberton in US custody. The assertions made by US Ambassador Philip Goldberg exposed the lopsidedness of the VFA,” Reyes said.

“The US government’s interpretation of the VFA is that under any and all circumstances, the custody of an accused US serviceman will always remain with the US for the duration of the judicial proceedings.”

Reyes said that the US “should immediately” surrender Pemberton to the proper Philippine authorities, taken out of the Joint United States Military Action Group (Jusmag) facility in Camp Aguinaldo and be put in a Philippine jail, which, he said, the VFA prevents.

He added that the VFA only requires the US to “take note” of the request of the Philippine government to have custody of Pemberton.

“The VFA by design favors the US. It is an affront to our sovereignty and our entire legal system,” Reyes said. “It protects US servicemen from our legal processes by placing them beyond the reach of the Philippine judicial system.”

As of posting time, Pemberton is detained inside a container van in the Jusmag compound in Camp Aguinaldo, an area inside the camp that the US government has sovereignty.

Reyes added that the administration of President Benigno Aquino III should terminate the VFA following the issuance of the warrant of arrest and the request of the Department of Foreign Affairs to seek Philippine custody of Pemberton.

“The VFA shames the Philippines. The US embassy’s refusal to turn over Pemberton is an insult to our nation and our people,” Reyes said.

ADVERTISEMENT
Read Next
Should Manila Ocean Park be allowed to import Beluga whales?
EDITORS' PICK
The Najima Drive: Nissan’s MD drives #GoAnywhere adventures in new video series
Can Your Brand of Meat Be Trusted? Here’s How to Know You’re Eating Safe Meat
Can travel make you fall in love?
Xi’s early involvement in virus outbreak raises questions
COVID-19 screening checkpoints remain for those going to Boracay
COVID-19 has infected more than 69,000 people globally
MOST READ
2,000 iPhones given for free by Japanese gov’t to passengers stuck on ship due to coronavirus
WATCH: Sarah Geronimo dances ‘fierce’ version of ‘Tala’
Xi’s early involvement in virus outbreak raises questions
NBA loses ‘hundreds of millions’ in China over Hong Kong tweet
Don't miss out on the latest news and information.