MANILA, Philippines—Sending the agreement to the Senate would embarrass the President before the international community.

Government has again asked the Supreme Court to dismiss for lack of merit petitions questioning the legality of the Philippines-United States Enhanced Defense Cooperation Agreement (EDCA), saying Senate concurrence would be unnecessary in a pact recognized as an executive agreement under the Constitution.

In a 42-page memorandum filed Tuesday, the Office of the Solicitor General (OSG) asserted the validity of the pact, saying a referral to the Senate, as some magistrates had expressed during oral arguments last month, “would diminish the President’s powers and result in international embarrassment for the President, adversely affecting the country’s standing in the international community.” 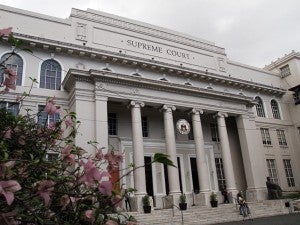 Wrapping up the state’s case following oral arguments at the high court on Nov. 18 and 25, the OSG cited how EDCA rested on solid legal basis under the Constitution, which, it said, has recognized the legality of executive agreements.

According to the OSG, Article 8, in Sections 4(2) and 5(2)(a), acknowledges the validity of executive agreements, as the provisions cite such pacts in the same breath as a “treaty, presidential decree, proclamation, order, instruction, ordinance or regulation.”

“The existence of executive agreements as a distinct category of legal instruments subject to judicial review is indisputable recognition of the power of the Philippine President to enter into such agreements,” said Acting Solicitor-General Florin Hilbay in a statement.

The OSG further reiterated that EDCA would be beneficial to the Philippines, asserting that it put to operation existing Philippine-US treaties such as the Visiting Forces Agreement (VFA) and the Mutual Defense Treaty (MDT).

“The characterization of the EDCA as an executive agreement rests on the concept that the President, as Commander-in-Chief, Chief Executive, and Chief Architect of Foreign Relations, has the authority to enter into implementing agreements pursuant to existing treaties,” said the OSG in its memorandum.

“Limiting this otherwise constitutionally guaranteed authority to enter into executive agreements would fundamentally compromise the powers of the President as Chief Executive and deprive him of the bulk of his foreign affairs powers under the Constitution,” said the government defender.

The OSG earlier said the President must be allowed to fulfill his duty to protect the state from all threats.

It noted how the Senate itself has not formally objected to EDCA, having been “well-informed of the contents and coverage [of the agreement] and are presumed to have seriously considered whether [it] is a treaty that requires their concurrence.”

Recalling how Associate Justice Marvic Leonen “floated” the idea of a court-mandated referral of the pact to the Senate during oral arguments, the OSG said the chamber itself “has not issued a resolution expressing its objection to the EDCA, much less authorized any of its members to file a suit on its behalf.”

It cited jurisprudence where the high court had ruled that “it is within the authority of the President to refuse to submit a treaty to the Senate.”

“The silence and active non-participation of the Senate in the current proceedings is an affirmation of the President’s characterization of the EDCA as an executive agreement,” said the OSG.

“Absent any clear evidence that Senators have been prevented from invoking the privileges of their institution, the honorable court must presume that the Senate itself sees no need for such concurrence. Consequently, no actual case or controversy exists that would warrant the exercise of the honorable court’s power of judicial review,” it said.

The Philippines, through Defense Secretary Voltaire Gazmin, and the United States, through its Ambassador to Manila Philip Goldberg, signed the agreement in April, just before US President Barack Obama’s overnight state visit in Manila.

As an implementing agreement of the MDT and the VFA, EDCA would allow US forces greater access to and use of Philippine military facilities and bases for their own military installations and storage of war material.

The OSG earlier asserted that such use would solely rest on the permission of the Philippine government. It was seen as a move to enhance military cooperation between the long-time defense allies, with the US pursuing its strategic pivot to the Asia-Pacific and the Philippines building up its defense capabilities in the face of the unresolved maritime dispute in the West Philippine Sea.

In its memo, the OSG said that President Aquino ratified EDCA last June 6 while the US considered the pact to have “entered into force” on June 25 through a diplomatic note. The US has also filed EDCA before the US Congress, as required by American law.

“In geopolitical terms, the EDCA is the evidence of the currency and credibility of the defense alliance between the Philippines and the US. It is the clearest possible communication to everyone in the region of the vitality of our half-century defense agreement with the US,” said the OSG.

“In sum, what the EDCA does is to enhance the existing contractual security apparatus between the Philippines and the US, set up through the MDT and the VFA. It is the duty of the honorable court to allow this security apparatus enough breathing space to respond to perceived, anticipated, and actual exigencies,” it said.

It cited US support during the difficult response to devastated Eastern Visayas following Typhoon Yolanda (international name: Haiyan), where the Americans sent military assets — ships, aircraft, heavy equipment among them — to back Philippine efforts.

The OSG noted how such efforts also suffered delays as none of the US assets had been pre-positioned in the Philippines — one of the activities that the EDCA would now allow.

“A significant observation during Typhoon Haiyan is that despite the resources and technological capabilities of the US forces who rendered HADR (humanitarian assistance and disaster relief), it took days to get relief efforts underway. This is because HADR equipment and materiel were not prepositioned, i.e., still had to be transported to affected areas. This contributed to the delay in the US forces’ relief efforts,” the OSG said.

“In the absence of the EDCA, coordination for contingency operations may be hampered by the need to clarify and renegotiate minute operational details. This includes the determination of the equipment and supplies needed and their transport and storage, as well as the security and logistical arrangements for the forces that would conduct the actual operations,” it said in the memorandum.

The OSG also questioned the standing of the petitioners in filing the case, saying “only the Senate as an institution may sue against any alleged impairment of its institutional prerogatives.”

Petitioners against EDCA include former Senators Rene Saguisag and Wigberto Tañada, among 12 Senators who voted to kick the US military bases out of the country in 1991, militant umbrella Bagong Alyansang Makabayan (Bayan), lawyers, and representatives from the religious and the academe.

“In exceptional cases, individual incumbent Senators were allowed to file cases in behalf of their institution. However, the SolGen found it curious that only former senators joined petitioners,” the OSG said in a statement.

It further cautioned the high court “against petitioners’ overuse of the ‘transcendental importance’ exception,” noting that it cheapened Constitutional safeguards and turned the Court into a venue for “historical grievances and…purely symbolic claims.”