Fil-Am sworn in as judge in LA Superior Court 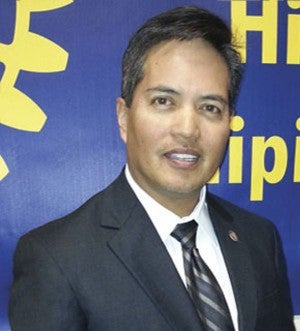 LOS ANGELES — Rob Villeza was sworn in on Thursday, December 11, as a judge of the Los Angeles Superior Court.

Villeza, who has served as an Assistant United States Attorney in the Central District of California for more than 20 years, was among six others appointed to the bench by California Gov. Jerry Brown in November.

“It’s a wonderful feeling but for me it’s not just an individual honor,” he said. “I really feel as if it’s a family honor, and…being appointed by the governor is truly a milestone event for us, so we’re very excited about it.”

Hildegarde Aguinaldo, president-elect of the Philippine American Bar Association, said Villeza joins seven other Filipino Americans on the LA Superior Court. Only four of these were appointed to the bench, and the most recent appointments were made in 2008, she said.

To further put these figures into perspective, less than two percent of judges on the LA Superior Court are Filipino, she said.

“I say these numbers not to frighten, but to express how meaningful Rob’s appointment is to our community,” Aguinaldo said. “It means that students and attorneys have gained a role model who can encourage them to consider and pursue an avenue less traveled: judgeship.”

Many only had positive words about Villeza at his investiture ceremony, held at United States District Court in Downtown Los Angeles.

“I’m so happy for Rob to receive this appointment. It is very, very well deserved,” Fred Slaughter, judge of the Orange County Superior Court, said the ceremony. “But I’m even happier for the people of Los Angeles County, who are truly lucky to have Rob Villeza on the bench to serve the community.”

The newly appointed judge was sworn in by Consuelo Marshall, senior United States District Judge for the Central District of California.

Villeza became a prosecutor in 1991 and served as the Deputy Chief of the Organized Crime Drug Enforcement Task Force Section in the US Attorney’s Office in the Central District of California where he prosecuted and investigated money laundering and drug trafficking cases.

At 52, Villeza holds many successes in his professional career.

As a prosecutor, he has worked on cases involving the seizure of three tons of cocaine, which was the second largest seizure of the substance in the US at the time; he was one of two prosecutors who successfully argued that the Cripps gang operated a continuing criminal enterprise; additionally, Villeza worked on a drug smuggling investigation involving private jets flying huge quantities of cocaine to the east coast, which led to the seizure of 300 kilograms of cocaine.

Out of 10 children, Villeza became the first lawyer, the first judge,and was the second sibling to graduate from college.Yet, Villeza’s path to success was a winding one.

Born to Filipino parents – his mom was from the Philippines and his Filipino dad had worked as a janitor in Hawaii – Villeza grew up in Echo Park during a time when gangs and graffiti were common in the area.

At the age of six he found out his father had cancer; his father passed away before his 16th birthday, leaving his mom to take on the role of both parents.During high school, Villeza worked as a mechanic apprentice at a shop in Silver Lake after classes.

His plan after graduating was to become a full-time mechanic, which was what he ended up doing.“Education was not a priority for our family or most families in the neighborhood, we just tried to get by,” he said. “And that culture carried on even throughout high school.”In fact, the thought of college was not one he entertained while growing up.“

But at some point something changed,” he said.Villeza decided to take some criminal justice courses at Pasadena City College with the intention of becoming a police officer, and he eventually developed a passion for the law.

The newly appointed judge said that because he came from a neighborhood like Echo Park before gentrification, he is someone on the bench who people can relate to because he has a similar background, and can appreciate and is sensitive to their issues.“I think that’s one of the things I feel I bring to the bench because I’m like them,” he said.

“A couple of wrong choices and I probably would be one of the defendants in the lineup for the arraignment calendar.“But fortunately, I made a few good choices. And now I’m up here [on the bench].”

As a new Filipino-American judge, Villeza said he takes on the responsibility of ensuring young Fil-Am lawyers are supported and encouraged to consider positions, such as working in the US Attorney’s Office and applying to the bench.

“We need more Filipino-Americans not only in the legal profession, but also in these very important positions,” he said.