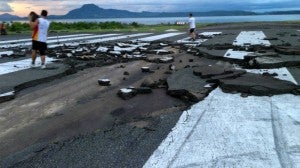 PHOTO COURTESY OF THE CIVIL AVIATION AUTHORITY OF THE PHILIPPINES

MANILA, Philippines–Pope Francis’ six-hour visit to Tacloban City and Palo town in typhoon-devastated Leyte province on Jan. 17 will cost the government P96.63 million, according to the Department of Public Works and Highways (DPWH).

The bulk of the expenses—P61.56 million—will go to the rehabilitation of the Daniel Z. Romualdez Airport terminal building, the parking area and road network, according to the DPWH office in Tacloban.

The expenditures are covered by two special allotment release orders for P72.38 million and P24.25 million issued by the Department of Budget and Management on Nov. 12.

Rolando Asis, DPWH regional director, said in a text message to the Inquirer that 60 percent of the projects had been completed and the rest would be finished by Jan. 14.

— P31.47 million for the backfilling and surfacing of airport grounds.

— P7.95 million for the fabrication of barricades.

— P5.5 million for the construction of a stage, choir and orchestra platform and expenses for light and sound systems.

— P5.35 million for the procurement of 653 pieces of GI pipes to be used as crowd barriers.

The National Historical Commission of the Philippines will provide about 600 Philippine and Vatican flags along the papal route.

The private sector will shoulder the P6.44-million cost of improving the road to the Archbishop’s Residence in Palo.

Leyte Rep. Ferdinand Martin Romualdez and the Tacloban City government made a commitment to provide 100 units and 20 units of portable toilets, respectively.–Jerry Esplanada