Sandiego gave Cebu Daily News, a  tutorial of the basic moves of the Sinulog dance  in his studio in Capitol Site, Cebu City.

“When you watch  it in one vast crowd, the steps are very easy to follow and you can see the synchronized movements,” he  said.

A long-time devotee of the Sto. Niño, the head of the famed Sandiego Dance Company often performs in the religious Fiesta Señor every January as well as the colorful Sinulog parade.

He said the dance would be broken down to three basic steps and would use  less footwork but more hand movements due to space limitations at the Luneta.  (See photo sequence on this page or view video in cebudailynews.inquirer.net)

One will be the classic one-step-forward-two-steps-backward Sinulog motion that portrays flowing water (“sulog” is the Visayan word for current of a river or the sea).  Two other dance positions portray the “offering” of prayer and “thanksgiving”.

The Sandiego Dance Company of Cebu was chosen by organizers of the papal visit to present a traditional Sinulog dance before Pope Francis in a Mass at the Quirino Grandstand at the Rizal Park (popularly known as  Luneta) on Sunday, Jan. 18, the pope’s last day in the country.

The performance will coincide with the feast of the Sto. Niño and the Sinulog festival in Cebu   where the original image of the holy child was given in 1521 as a baptismal gift by Portuguese explorer Ferdinand Magellan to Humamay,  wife of  chieftain Rajah Humabon. 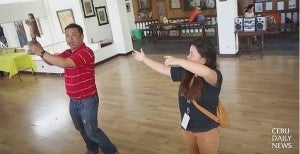 Cebu, which is considered the cradle of Christianity in Asia, is not in the official itinerary of the pope.

But Francis would still see the Sinulog dance through Sandiego’s group.

It will be the first time Sandiego, who dances with his wife Ofelia, and  the company will  miss  performing in the annual Sinulog Grand Parade.

It’s been a tradition for the dance company to wake up early to dress up at 2 a.m. and hear Holy Mass in their dance studio before heading out to the street for the parade.

But Val said his group would still be able to dance during the Sto. Niño fluvial procession in the Mactan Channel on Saturday, before flying to Manila.

Sandiego’s group will be given two-hours to practice on stage at the Quirino Grandstand and at the same time demonstrate to the crowd how to dance the Sinulog before the papal mass starts in the afternoon.

The Pope is scheduled to address the youth in a morning assembly at the University of Sto. Tomas and then celebrate Mass at the Rizal Park in the afternoon.

Sandiego said he would suggest that they use the jingle “Sinulog! Syagit ug Kusog”, with its vigorous music of drum beats and shouts of “Pit Senyor!”,   to accompany the dance.

“I think it’s not hard to teach these basic steps to millions of people. It’s like a zumba dance class. The people who will be participating are religious and willing to sacrifice. You will expect that something very good will happen,” he said.

The 50-member Sandiego Dance Company will be dressed in Spanish-era costumes with the men wearing red and gold uniforms of Spanish soldiers.

They will bring candles, white handkerchiefs, swords and shields, for a dance drama that tells the story of the coming of Christianity to Cebu.

“One of the influences of Spain was the gift of faith and we are very proud of it,” Sandiego said.

“It’s not all about the choreography.  What matters most is the offering. We offer this dance to the Sto. Niño and show the Holy Father that the Filipino family is something to be proud of.”

Archbishop Socrates Villegas, president of the Catholic Bishops Conference of the Philippines,  suggested last week that the crowd of mass goers bring with them their icons of the Holy Child.

He said the people would be taught how to dance the Sinulog “habang naghihintay kay Pope Francis.” (while waiting for Pope Francis)

Sandiego said the essence of the Sinulog was not the music or the performance.

“The message here is that we pray together and we dance the Sinulog as a form of prayer,” Sandiego said.