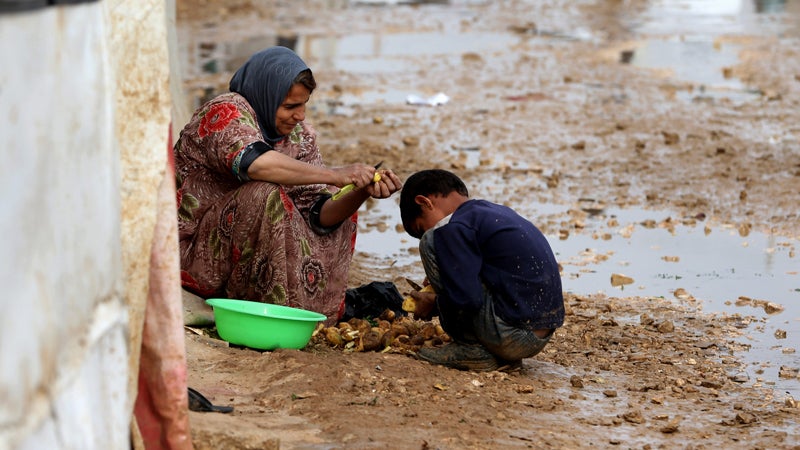 A Syrian refugee woman and her son peel potatoes outside their tent, at a refugee camp in the eastern Lebanese Town of Al-Faour near the border with Syria, Lebanon, Tuesday, Dec. 2, 2014. Syrian refugees in Lebanon reacted with panic Tuesday to news that the U.N. was suspending aid to 1.7 million refugees due to lack of funds a decision officials said threatens to starve thousands of families and add pressure on already strained hosting countries. (AP Photo/Hussein Malla)

GENEVA — After a social media campaign brought in a significant cash infusion, the U.N. food agency said Tuesday it has reinstated a food aid program that helps feed more than 1.7 million Syrian refugees.

In early December, the World Food Program suspended electronic food vouchers for Syrians who had fled to Jordan, Lebanon, Turkey, Iraq and Egypt. The move triggered panic among the refugees, threatening to starve thousands of families and add pressure on the already strained countries hosting them.

At the time, WFP said many donors failed to meet their commitments. The agency said it needed $64 million to support Syrian refugees in December alone.

On Tuesday, WFP said the voucher program was on again, thanks an unusual campaign it launched on socialmedia to raise $1 contributions from 64 million people around the world.

The WFP said it solicited $1.8 million in donations from almost 14,000 people and from private sector donors in 158 countries, as part of a campaign using the hashtag #ADollarALifeline. Other U.N. agencies, such as UNICEF and the U.N.’s humanitarian office, also promoted the campaign through social media.

The biggest online contributors through the agency’s address — http://www.wfp.org/ForSyrianRefugees — were Americans, then Canadians, then Syrians themselves. Aloe Blacc’s song “I Need A Dollar” was the online campaign’s featured soundtrack for the #ADollarALifeline video launched on social media channels.

“This outpouring of support in such a short time is unprecedented,” the food agency’s chief Ertharin Cousin said. “We’re especially grateful to the many individual members of the public who reached into their own pockets to send whatever they could to help Syrian refugees who have lost everything. They showed that even as little as a dollar can make a difference.”

The program pays for electronic vouchers, or e-cards, uploaded with an average $30 per family member, for refugees to buy food in local shops. The resumption of the food aid is bound to bring some relief to the desperate refugees ahead of the coming winter months.

WFP has helped feed millions of displaced people inside Syria and those who fled abroad since the crisis erupted in March 2011. The Syrian war has so far killed more than 200,000 people and led to a massive humanitarian crisis, forcing more than 3 million to seek refuge abroad and displacing 6.5 million within the country.

The violence in Syria continues unabated.

A government rocket attack on Monday in the southern province of Daraa killed three staffers working for Orient TV, an opposition-linked channel, according to activist Ahmad al-Masalmeh and the Britain-based Syrian Observatory for Human Rights.

The three, a cameraman and two reporters, were driving out of the contested village of Sheikh Maskeen, where they had been covering clashes between government troops and opposition fighters, when the rocket slammed into their car, the Observatory said.

Dozens of journalists have been killed in Syria since the start of the crisis. Authorities in Damascus restrict access to independent foreign media while local reporters work under heavy restrictions.