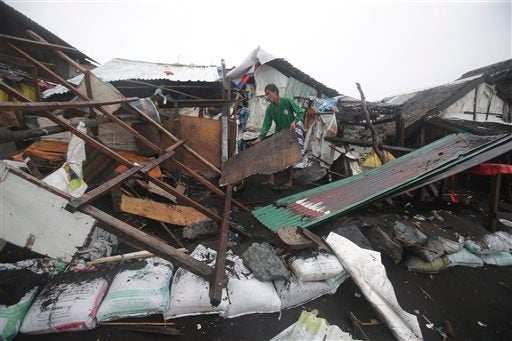 A Filipino man clears away debris from the remains of his damaged home as strong waves from Typhoon Hagupit battered a coastal village in Legazpi, Albay province, eastern Philippines on Monday, Dec. 8, 2014. AP

MANILA, Philippines—The head of the Geneva-based United Nations Office for Disaster Risk Reduction has cited the Philippines’ handling of the emergency related to the passage of Typhoon “Ruby,” saying the government did an “excellent job” of putting into action the lessons learned from Supertyphoon “Yolanda” which ravaged Eastern Visayas in November 2013.

Margareta Wahlstrom, UN Secretary General Ban Ki-moon’s special representative on disaster risk reduction, noted that “all arms of government, including the Philippine Atmospheric, Geophysical and Astronomical Services Administration and the National Disaster Risk Reduction and Management Council, and (local government units) like Tacloban City pulled together to save lives and minimize the damage being inflicted by this disaster event.”

In a statement, a copy of which was e-mailed to the Philippine Daily Inquirer, she said the Philippine government’s “zero casualty approach to managing Typhoon Hagupit (Ruby’s international name) was further evidence of Asia’s leadership role in reducing mortality and tackling economic losses from disasters.”

“We have been telling this story since the Indian Ocean tsunami 10 years ago that nations and communities have the power to reduce their losses if they are well-organized, understand the nature of risk and develop the capacity to deliver early warnings and evacuate groups at risk ahead of the disaster event,” she said.

According to Wahlstrom, “there has been a steady decline in mortality related to extreme weather events over the last 10 years and fewer people are being directly affected by such events as a culture of disaster risk reduction spreads across some of the most populous and hazard-exposed countries in the world, including China, India, Indonesia, Bangladesh and the Philippines.”

All these Asian countries, she said, had “committed to implementing the Hyogo Framework for Action (HFA), a global framework for disaster risk reduction which was endorsed by the UN General Assembly in 2005 following the Indian Ocean tsunami, which claimed some 227,000 lives on Dec. 26, 2004.”

Next March, the UN is holding a World Conference on Disaster Risk Reduction in Sendai, Japan, that aims to “adopt a revised HFA.”

“The Hyogo Framework for Action is being updated for adoption early next year. The experience of managing extreme weather events like Typhoon Hagupit is vital to our negotiations this week on setting targets and indicators for measuring progress in reducing exposure and vulnerability to extreme weather events,” she said.

Wahlstrom added, “progress also has to be made in reducing poverty, ecosystem decline, upgrading informal settlements, respecting planning laws and building codes as these are all just as responsible for driving risk as climate change which currently has everyone’s attention.”

Aquino on ‘Ruby’ preparation: We should be wiser after ‘Yolanda’