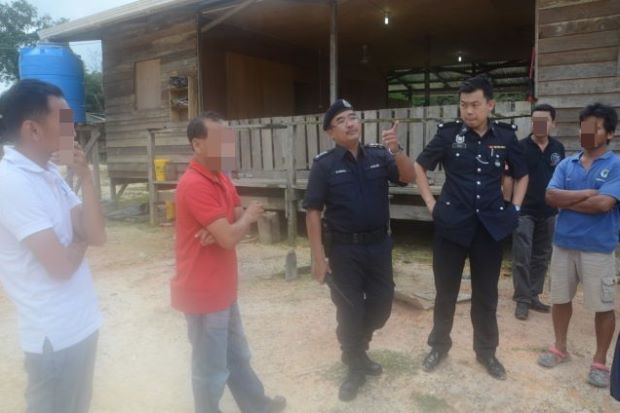 ACP Kamal (third from left) talking to some of the estate workers.
The Star / Asia News Network

SIBU, Malaysia–A Filipino was gunned down in cold blood by his own countryman in front of his workers’ quarters of an oil palm estate, 60 kilometers from here following a quarrel.

A village headman, Tuai Rumah Digat Kasi, 45, told reporters at the scene Monday that in the 7 a.m. incident, the victim, identified only as Anil, 36, had called the suspect to his workers’ quarters to settle a matter relating to their work.

The suspect was staying in another quarters some 100 meters away.

After the shooting, the suspect fled from the area.

“The suspect dashed to the front of the victim’s quarters armed with a knife and a homemade gun.

“Suddenly there was a sound of gunshot and the victim collapsed,” he said.

Digat whose land is leased for the company to plant oil palm said he was at his longhouse quite a distance from the oil palm estate.

He immediately rushed to the scene when told of the matter by a foreman of the estate.

“The victim is a nice man. I know him well as I used to come here.

“Before that he was working in Sabah for 10 years and he could speak Malay well.

“He had been working here for about three years,” he said.

Digat said the victim worked as a mechanic while the suspect is a driver of the estate.

Anil leaves behind three children of two boys-one aged 8 and another who is just a few months old. The other is a 10-year-old girl.

They also combed the area including the quarters of the suspect.

The police are investigating the case as murder under Section 302 of the Penal Code.