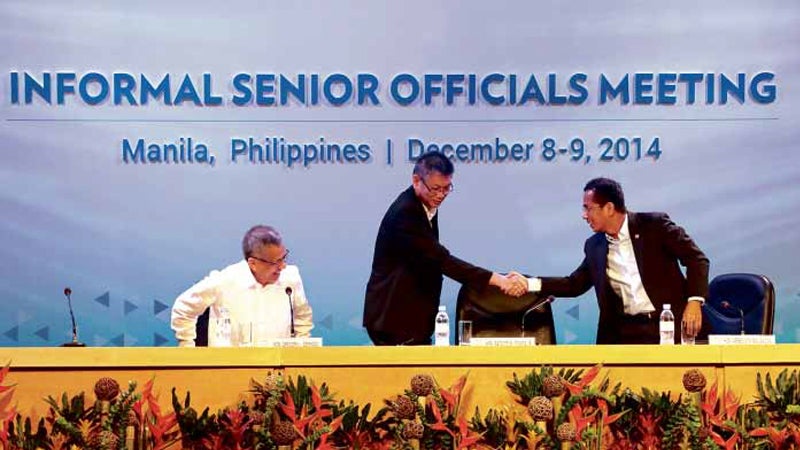 MANILA, Philippines—The Philippines is out to show that it has come a long way since it first hosted the Asia-Pacific Economic Cooperation (Apec) Summit in 1996.

Executive Secretary Paquito Ochoa Jr. was upbeat on Monday at the opening of the two-day Apec Informal Senior Officials Meeting at the Makati Shangri-La hotel—one of nine events leading to the summit of the 21-member organization that the country will host in November next year.

“Though there are dark skies overhead and the rest of the country, these stand in stark contrast to the bright prospects of Apec and its member economies,” Ochoa said in his speech to the gathering as Tropical Storm “Ruby” swirled toward the capital.

“It has been almost two decades since we last hosted Apec in 1996. We have come a long way since, and this is something that we hope to display in the coming months as we hold the various Apec meetings leading to the Apec Economic Leaders’ Meeting in November 2015,” Ochoa said.

He said the story and experiences of the country’s “remarkable turnaround” in recent years would help enrich the discussions of the region’s priorities in the coming summit.

Ochoa asked the delegates to join the nation in praying for people in the Visayas, parts of Mindanao and the Bicol region that bore the brunt of the powerful typhoon on Sunday.

“Our thoughts and prayers go to them, and to the men and women who have been mobilized to ensure their safety,” he said.

The meeting was to be held in Legazpi City, Albay province, but had to be moved to Manila because of the storm.

Socioeconomic Planning Secretary Arsenio Balisacan said that since 1996, Apec economies had sustained “a relatively good level of growth” and slowly but steadily were recovering from the global financial crisis in 2009.

“Over the next two years, growth in the region is expected to average at 3.8 percent,” Balisacan said, describing Southeast Asia as “one of the world’s bright spots.”

Balisacan said the country’s vision for Apec 2015 was to sustain a “prosperous and cohesive region that places inclusive development at the heart of economic integration in the Asia-Pacific.”

In drafting a road map for a free trade area in the Asia-Pacific, he listed four priority areas for discussion by the senior officials—“enhancing regional integration, mainstreaming small and medium enterprises (SMEs) in global and regional markets, investing in human capital development, and building sustainable and resilient economies.”

“The Philippines is particularly prone to natural hazards and this very meeting is taking place amidst another very strong tropical cyclone to ever make landfall this year,” he said.

Balisacan said that natural hazards, as shown by the Intergovernmental Panel on Climate Change, had become more frequent and more violent and hoped that Apec would tackle interventions to mitigate the effects of climate change and push for more disaster risk reduction and management measures.

Trade Secretary Gregory Domingo said that in the ministerial meetings, the Philippines would put “special emphasis” on the SME agenda, saying this would be “very critical” not only for Apec but also to the “forward movement of global trade.”

He said SMEs constituted “one of the strongest voices opposing global trade,” pointing out that this sector regarded “the influx of goods and services in their own markets as cumbersome and difficult to take advantage [of] because of the free trade agreements’ rules and regulations.”

Domingo said Apec should become the “incubator for active and dynamic SMEs and enablers in providing SMEs wider access to opportunities for inclusive growth and their integration into the global value chain.”

The senior officials later in the day attended a symposium broken into seven sessions where they listened to various experts on the 21st century megatrends and challenges of Apec, inclusive growth strategy for Apec, regional economic integration, SMEs, human capital development and sustainability and resilience and inclusive growth.