Vigan hailed as one of ‘New7Wonders Cities of the World’ 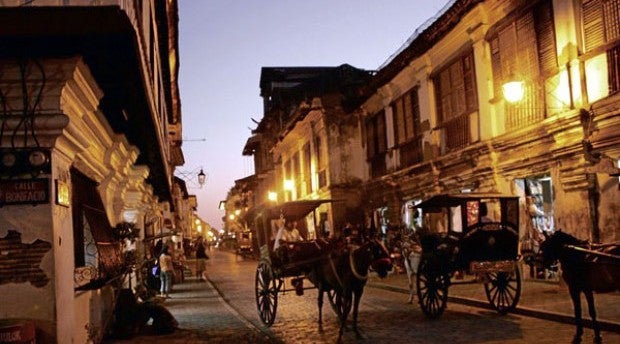 THE HERITAGE VILLAGE in Vigan City remains busy at night as tourists enjoy walking on its cobblestone streets and ride in calesa (horse-drawn carriages) that ply the city famous for its rich culture and Spanish-era mansions. LEONCIO BALBIN JR.

MANILA, Philippines — The heritage city of Vigan in Ilocos Sur province, has been hailed as one of the “New7Wonders Cities of the World” in an awarding ceremony held in Dubai on Sunday.

The other wonder cities are: Beirut in Lebanon, Doha in Qatar, Durban in South Africa, Havana in Cuba, Kuala Lumpur in Malaysia, and La Paz in Bolivia.

“We congratulate each of these cities on achieving their New7Wonders status, and we look forward to celebrating their election to the “canon of 7″ with their citizens in 2015. The New7Wonders Cites will now join the New7Wonders of Nature and the New7Wonders of the World in becoming part of Global Memory for humanity for ever,” said Bernard Weber, the founder of the nongovernment organization New7Wonders.

The global search for the new wonder cities seeks to be an avenue “for discussing everything from urban planning to metropolitan governance, from tourism to architecture.”

In 2011, New7Wonders organization also included the Puerto Princesa Underground River as one of the New7Wonders of Nature.

Vigan was named as a World Heritage Site by the United Nations Educational Scientific and Cultural Organization in 1999 for being the “best-preserved example of a planned Spanish colonial town in Asia.”

Vigan one of 14 wonder cities finalists