A multiawarded Filipino poet for peace and friendship

On Nov. 6, a Filipino poet, Caroline C. Nazareno, was given a plaque of recognition as   air gazeteci ( poet-journalist ) at the Kibatek International Literary Festival in Tuzla, Istanbul, Turkey.

Kibatek or Kibris Irak Balkanlar Ayrasya Turk Edebiyatlari Kurumu is an organization of Turkish poets and artists created in 1998 to give honor and recognition to the world’s literary writers and artists. She represented the Philippines in the event.

Nazareno is known as a poet for peace and friendship. 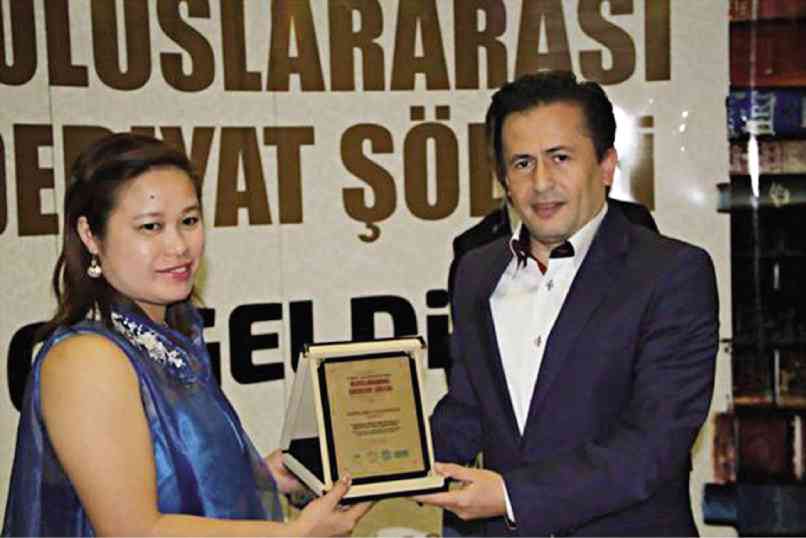 “I am deeply honored by the award, because it is not only for me but for the Philippines,” says Nazareno, 34, a native of Pangasinan and a resident of Vancouver, Canada.

Nazareno has been in Canada for six years. She is a respite provider and nursing aid for special adults. She is also editing articles during weekends and writes for the Philippine Canadian Inquirer. She also does ghost writing during her spare time. With so much in her hand, she still finds time to write poetry.

“I work eight hours a day. My mind is always exploring however tiny stuff that is, my heart and mind naturally pop out creative juices. I scribble sometimes on a tissue paper, receipt, or at most I have my small journal with me, where I jot down my poems,” she explains.

As a child, Nazareno found solace in writing poetry. She began writing when she was in Grade 4 being the literary editor of their school organ. Since then, she never stops. To further hone her talent she joined creative writing workshops and trainings at University of the Philippines Diliman, and storytelling workshops at the Philippine Normal University.

After teaching briefly in the Philippines, she migrated to Canada because it was her lifelong dream. In spite of that, she always remains a Filipino at heart and continuously gives honor to the Philippines through her poetry.

Since 2011, she has been recognized by several international festivals. Among them are the World Poetry Canada and the International Peace Festival and Poetry Around The Globe.

The International Poetry Translation and Research Center based in China had chosen her as one of the featured poets in the World Poetry Yearbook 2013. The book featured 211 world poets from 93 countries. She is known in the literary circle as Ceri Naz.

Nazareno also travels a lot to attend conferences around the globe. It is also from traveling that she gets inspirations to write.

“I am inspired beyond small and big happenings of my life’s journey. People, experiences and places,” she says.

Nazareno also mentions Dr. Epitacio Tongohan or Doc PenPen B. Takipsilim, the founder of Pentasi B Poetry as the “cultivator” of her poetic abilities.

Tongohan, a Canadian-based poet is also dubbed as the “Father of Visual Poetry.” But it was Ariadne Sawyer, a noted Canadian poet and the founder of World Poetry Canada and International opened her to many opportunities in poetry.

Nazareno’s interest on cosmos and science led her to compose haiku “Hello Mars” which was one among the hundred of poems chosen and formed part of a special DVD project attached to the National Aeronautics and Space Administration’s MAVEN spacecraft, headed to Mars.

Nazareno also travels a lot to attend conferences around the globe. It is also from traveling that she gets inspirations to write 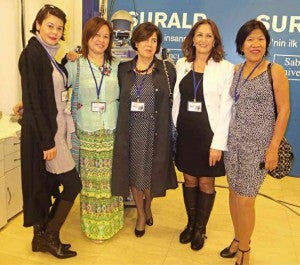 NAZARENO (second from left) with other poets during the festival

Introducing her poetry in PH

In November 2013, Nazareno and Tongohan launched the Pentasi B World Friendship Poetry Celebration held at the National Museum of the Philippines.

It was attended by international poets from the Philippines, Canada, USA, Thailand and Singapore.

She is planning to launch a “poetograph” book or a coffee table book in the Philippines.

Nazareno says that the Philippine literary scene is a “re-form in progress,” rich and proliferating and sometimes revolutionary.

“We also need to rediscover some other forms that will make the Philippines and Filipinos stand out,” she adds.

On writing, she has this tips: “Read and read. Learn the multidimensional way of writing and conceptualization. Explore all genres and put your heart into your writings.”

As a poet for peace and friendship, she shares this quote from Pentasi: “No colors no races, all colors all races, all love embraces.”