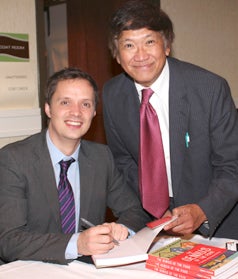 Upon arrival, he saw a place that suffered the wrath of the strongest recorded typhoon. Except for two buildings, all the houses were roofless and a few were a total loss. There was no water and electricity. Though close to midnight, the whole village came out to welcome the foreigner.

Sensing he hadn’t eaten yet, they served him two grilled squids, which he suspected were the last of their catch for the day. The children were highly appreciative of the modest gifts he brought, which by all indications would be their only gifts that Christmas.

Yet, the villagers were more concerned about this visitor who was away from his family in England. So the weary villagers gave the best reception they could offer to bring joy to this stranger who came from afar to show his compassion on that holy day.

With only a flickering torch that was obviously low on fuel to illuminate them, and music from a Nokia cell phone to accompany them, an impromptu singing contest was held with the stranger as the judge.

Soon, dancing followed with the Englishman, caught up in the enthusiasm of the group, joining them and declaring that this was the most joyous Christmas he ever had.

At the end of the day, Jose, the village president, offered to shelter Thomas and let him occupy a large piece of board for him to sleep. Unused to the discomfort of his “bed” in a roofless house, he got up and went out from his sleeplessness to use the bathroom.

It was then he saw his host with his wife cuddled up in an even smaller board and his three children sleeping on the floor. The guest realized he was occupying the “marital bed”—the best in the house. He shamefully admitted to himself that he would not have given the same hospitality if a stranger came to his place back home.

Thomas Graham wrote in his recently published book, The Genius of the Poor—A Journey with Gawad Kalinga:

“I have been accorded dignity and value, as a fellow human being, even though I…appeared unexpectedly. My visit was apparently worthy of a spontaneous party to celebrate Christmas, with me as the honored guest. The community’s willingness to use their very limited resources in this way has truly humbled me…This isolated community has somehow put me more in touch with my own humanity.

“Even on Christmas Day, it seems that it is our presence, not our presents, that really counts…Genius is a term we often use to refer to an individual’s brilliant attributes…The poor are rarely given the opportunity to realize their full potential…Nonetheless, there is a certain “genius,” I believe, in the underlying connectedness within the (GK) communities I visited…”

“It has made me all too aware of the disconnectedness of the western culture that has shaped me; its obsession with gaining material wealth, and of pursuing the goal of individual self advancement and self fulfillment.”

(Limited advanced copies of Graham’s book were available during the recent 12th Anniversary Thanksgiving dinner of the Gawad Kalinga on November 16 and were all sold out.  Formal launching in the US will be in early 2015. To order, call GK Chicago area head, Jun de Guia, at 847-848-2300 or email: [email protected].)

THERE IS A ROOM AT THE INN: In a remote and poor fishing village on Christmas Eve after a super typhoon in 2013, a family gave the best bed to a stranger who unexpectedly made his presence in the devastated house.