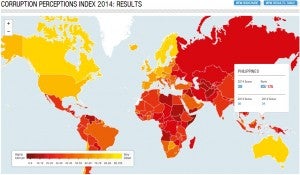 MANILA, Philippines–The Philippines ranked 85th out of 175 countries in the Corruption Perception Index (CPI) for 2014, an improvement from placing 94th last year.

Transparency International said the Philippines got a score of 38 on a scale of 1 to 100. The CPI scores countries from 0 (highly corrupt) to 100 (very clean).

Although the Philippines still belongs to the lower two-thirds of 175 countries with scores below 50, the data shows an improvement from the previous CPI especially when comparing 2014 and 2012.

“We consider a +4 to represent change in the perceived level of corruption,” Cleo Calimbahin, executive director of Transparency International said.

The international community, Calimbahin said, is looking forward at the reform initiatives of the country.

She encouraged the public and private sector leaders to continue to push for good governance and inclusive growth, for prosecution and sanctions against corrupt officials, and for the effective delivery of public services.

Philippines remains one of most corrupt countries—survey