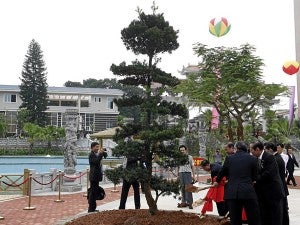 ZHANGZHOU, China—Village lore has it that the evergreen planted by then president Corazon Aquino when she visited the village of Hongjian  foretold of her son’s rise to power after it grew a branch instead of going up straight like a pine tree.

During a visit to his ancestors’ village on Saturday, President Benigno Aquino attributed the araucaria’s splitting into two branches to the laws of nature instead of being a supernatural portent of his rise to the presidency like his late mother.

“Before I arrived here, I was told that years ago, on its own, this tree split in two. Nature has its own laws and surely this natural phenomenon was not a prophecy—for I never aspired to reach the same heights and achieve the same success as my mother,” Aquino said in a speech before Honjian villagers, including his relatives from the Xu or Co clan.

“And yet, by the will of my people, I stand here in the same position she occupied—as President of the Philippines—bearing the same responsibility she had, to change peoples’ lives for the better,” Aquino said in a speech he delivered after seeing the evergreen and planting his own tree at the village park.

Aquino himself traced his mother’s steps into their ancestors’ village and saw the araucaria that Cory Aquino planted 23 years ago.

Just as his mother did during her state visit in 1988, President Aquino lit incense at the temple of the Xu and planted a tree in village.

Loud firecrackers, dragon dancers and drums welcomed the President as he arrived in a stretch limousine in this rural village outside Zhangzhou.

He was welcomed by Zhangzhou officials and his relatives from the Xu clan.

“Today, a seed planted by your forefathers far away has come back to sit in the shade of the ancestral tree,” President Aquino said during a brief ceremony at the Hongjian Park after his activities with his kinsmen and the tree planting at the park.

“It is an honor to see the Ancestral Hall of the family Xu and to see the tree my mother planted 23 years ago. I cannot help but recall the gracious words of Premier Wen: the tree your mother planted has flourished and put in deep roots,” he added.

Mr. Aquino expressed his gratitude to the people of Hongjian for continuing to honor his mother and for dedicating the Philippines-China friendship hall in the park to her memory.

“I am grateful to all of you for the honor you continue to give to my mother. I was particularly happy to hear that the soon-to-be finished Sino-Philippines Friendship Memorial Hall in this park will be dedicated to her memory,” the President said.

Consul General Adelio Angelito Cruz told reporters about the belief of the Hongjian villagers regarding the tree.

“While the araucaria tree was growing, its trunk split into two and now the tree has two tops of equal height. When this happened, villagers took it as a sign that another branch from the former President’s family would rise up and achieve the same stature as the mother who planted the tree,” Cruz said.

“Indeed, history proved them right when then Senator Benigno Aquino III won the presidential election of 2010. Hongjian villagers now take this as the fulfillment of the event foreshadowed by the tree top splitting into two with both sections growing to equal height,” he added.

Cruz said Cory Aquino was a fourth-generation Chinese-Filipino descended from  Co Yu Hwan, a Chinese immigrant who settled in the Philippines in 1861.

Co Yu Hwan later converted to Catholicism and was then named Jose Cojuangco. His son, Melencio, was born in 1871. Melencio married another Filipino-Chinese named Tiakla Chico in 1894 and among their children was Jose Cojuangco, the father of Cory Aquino.

Cruz said Hongjian is a rural villate near the border of Xiamen’s Haicang District and Zhangzhou. He said Hongjian is home to 1,700 residents all surnamed Co, some of whom have traceable blood relations to the President.

He added that 85 percent of Chinese-Filipinos trace their roots to Fujian, particularly  the cities of Xiamen, Zhangzhou, Quangzhou, Jinjiang and Shishi.

Cruz said these even include Chinese-Filipino businessmen like Henry Sy, John Gokongwei, Lucio Tan, George Ty and Tony Tan Caktiong. Even Rizal, he said, had roots in southern Fujian.

“Their success brought not only prosperity, but honor to their kinsmen, whether in the Philippines or China,” he added.

“In my country we have a saying: that if one is to move forward, one must know how to look back. So I would like to thank the people of Hongjian—all my distant cousins, aunts, and uncles—for their warm welcome, and for being among the many who give me the strength to carry on and succeed,” Mr. Aquino said.