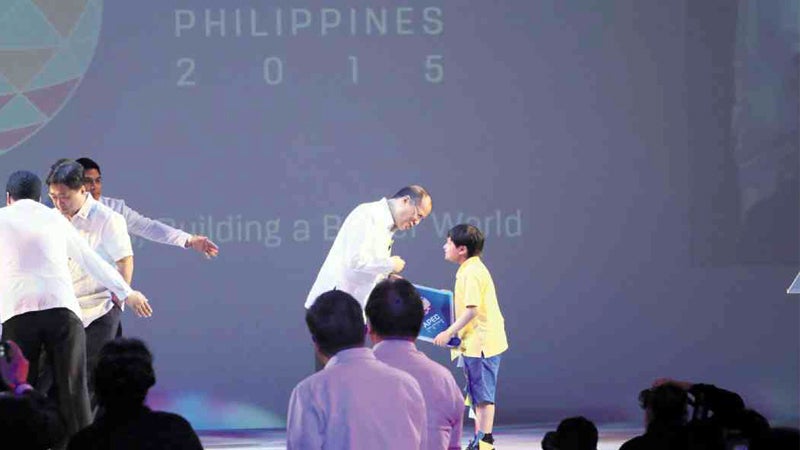 APEC SUMMIT 2015 LOGO President Aquino receives the official logo of the Asia-Pacific Economic Cooperation Summit 2015 from a young boy during the kick-off ceremony of the Apec summit in the Philippines in Makati City on Monday. Aquino said Apec members would “witness for themselves the vibrancy of an inclusive and growing nation” in Manila and eight other locations around the country. GRIG C. MONTEGRANDE

MANILA, Philippines–President Aquino on Monday night made a pitch for the Philippines as a “global example of inclusivity” as the country kicked off its hosting of the Asia-Pacific Economic Cooperation (Apec) summit next year.

Apec 2015 centers on “building inclusive economies, building a better world,” a theme that resonates in the Philippines where Aquino has promised an equitable share of economic growth, especially among ordinary Filipinos.

“The only real growth is inclusive growth, which has been the north star of all our government’s initiatives,” the President said in a speech at the Green Sun Hotel in Makati City.

“As the clamor for progress that leaves no one behind resounds the world over, the Philippines has an opportunity to set a global example of inclusivity this year,” he said, citing the country’s steady economic growth and improved credit ratings.

“The Philippine growth story is written on the tablet of transparency and good governance,” he said.

Aquino was visibly upbeat over the prospect of parading the country’s economic growth and “transformation” under his watch among the 20 other Apec member economies.

Since 1996, when the Philippines last hosted Apec, he cited “moments when many of us wondered if our country’s potential had been completely squandered by self-serving leadership.”

“Thankfully, the Filipino persevered. Today, I am proud to say that, in the past four years and five months, with the help of our people, we have turned the corner. We have won back the recognition, the respect and the confidence of the global community,” he said.

In Manila and eight other locations around the country, he said Apec members would “witness for themselves the vibrancy of an inclusive and growing nation.”