The best Filipino breakfast in Chicago is in the Ukrainian Village 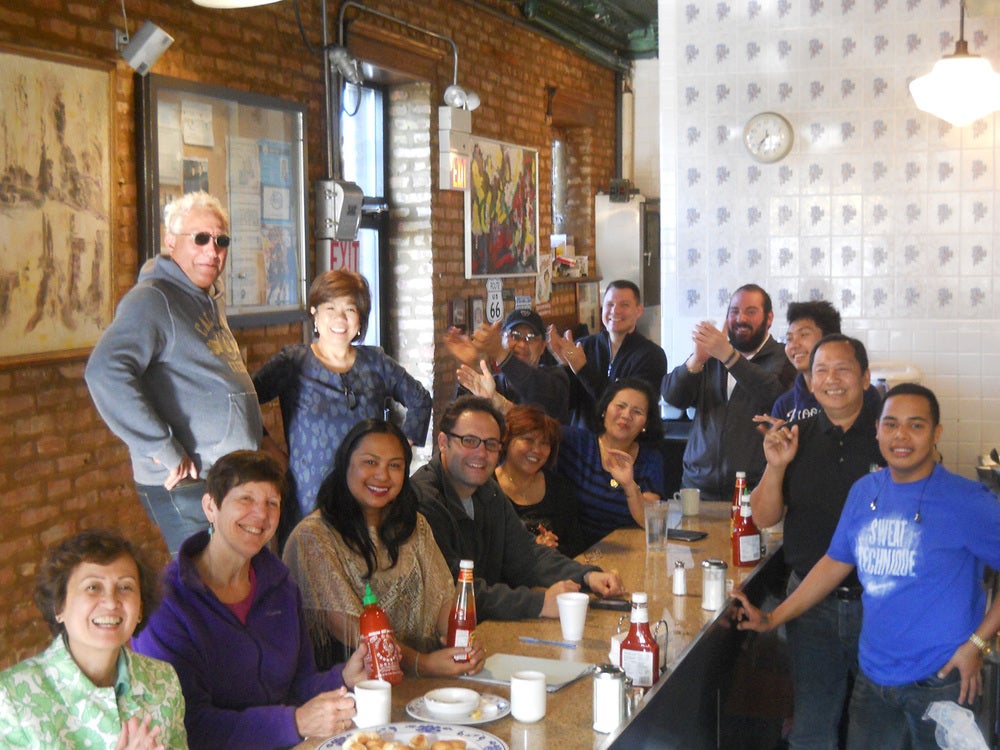 Chicago is known for its neighborhoods, and the Ukrainian Village in the West Town community area easily stands out. Although it has increasingly become diverse, the village has retained its Ukrainian roots. For example, it has a number of churches of which three Ukrainian ones are located on one street. Also, there are local ethnic institutions, such as the Ukrainian Institute of Modern Art, the Ukrainian National Museum and the Ukrainian Cultural Center.

Word is spreading quickly, however, that the Ukrainian Village has unwittingly added a Filipino flavor to its community: Uncle Mike’s Place, the home of Filipino breakfast in Chicago. It owes its fame and success to a combination of hard work and serendipity.

Mike Grajewski’s mother was a Ukrainian and his father was Polish. He grew up in the Ukrainian Village. He met his future wife, Lucie, who was then a Loyola University of Chicago student, at a party.

After their marriage, they lived in three-story building in which Lucie’s mother, Leonida Serrano, stayed on one of the floors. The aroma of her cooking usually pervaded the building, and Mike could not help but be exposed, if not immersed, in Philippine cuisine.

“My mother was a great cook,” Lucie recalls. “She never taught Mike how to cook. Mike merely observed her. He has a knack for smelling and tasting food and being able to cook it afterwards.”

Mike and Lucie have always wanted to own a business. So when a diner, which was originally an Italian-American grocery store for four decades was up for sale, Mike and Lucie bought it. 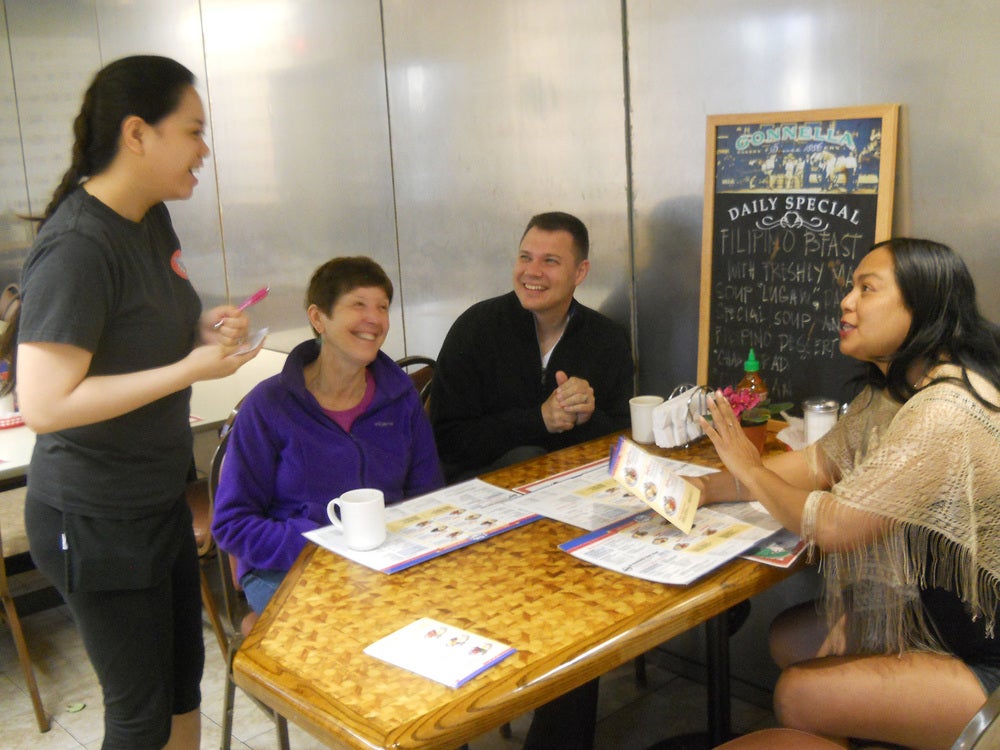 Uncle Mike’s Place opened in January 1991. The standard fare for any diner, like pancakes, sandwiches and egg dishes, was served. Then, Mike enhanced the menu with a Philippine twist. “I added the marinated skirt steak, which instantly became a hit,” he says.

Lucie would sometimes eat Filipino breakfast at one of the tables. Customers, especially Filipinos, would ask her if they could also order the same food. She shared her experience with Mike and that made them start thinking.

Enter one of their vendors who informed Mike about their in-house Filipino sausage and bacon, which he volunteered to promote at Uncle Mike’s Place. And that is how Filipino breakfast began to be the centerpiece of the menu.

Filipino breakfast at Uncle Mike’s Place is truly to die for. Not only is the presentation enticing, but the gastronomic experience is nonesuch as well.

Served in a huge plate, each dish includes two eggs any style, garlic fried rice and a bowl of Chicago lugaw (rice porridge), which is Mike’s recipe inspired by his mother-in-law. Most Filipinos live in Chicago’s North Side, but they are known to disregard any distance when it comes to good food. 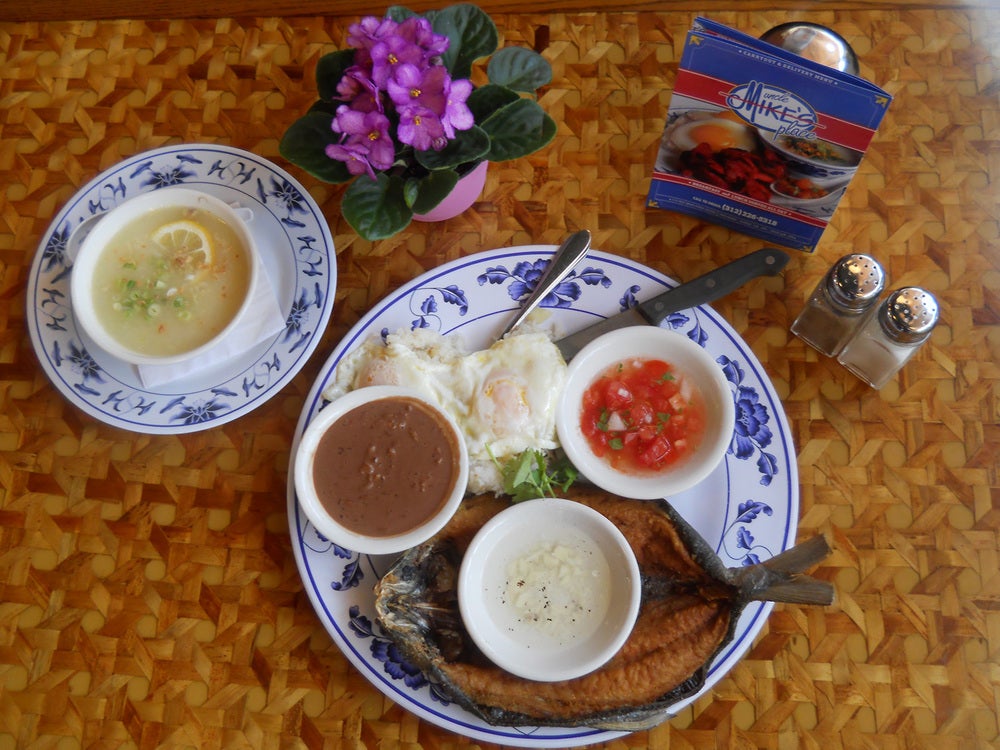 The milkfish breakfast, served with two eggs any style, garlic fried rice, and a bowl of fresh Chicago lugaw (rice porridge), which is in the upper left. (STYLING BY JOAN VANDE KIEFT/PHOTO BY IVAN KEVIN R. CASTRO)

Sandra Masibay, a schoolteacher, always tells her friends and relatives about the renowned Filipino breakfast at Uncle Mike’s Place. She elaborates, “Mike and Lucie set the homelike ambience by circulating in the restaurant and really getting to know people. It did not take long for them to become my friends.”

Mike Magajne, a financial planner of Slovenian ancestry, naturally gravitated towards Uncle Mike’s Place because he lives only two blocks away. “The reddish color of the longganisa and tosino,” he remembers, “piqued my interest, and I just had to try them.” He has become a habitue, introducing Uncle Mike’s Place to everybody, including his Filipino clients.

Len Cannata, an Italian-American law student from Cicero, Illinois, was looking for a place to eat at an unholy hour, and Uncle Mike’s Place was the only one that was open. He chose a Filipino breakfast out of curiosity, and he has not stopped ordering one from thereon. “Not only is the Filipino breakfast delicious,” he explains, “but the size is also humongous!”

“We hope more people will explore and experience Philippine cuisine in its entirety,” Lucie adds.