MANILA, Philippines–Actress Boots Anson-Roa Rodrigo got a call one Sunday in September from Fr. Jun Sescon, who is part of the papal visit committee, informing her about the role the Rodrigo family would be playing in the meeting of families during the much-anticipated visit of the Holy Father.

“I was initially speechless upon receiving that call. I think I said, ‘Wow, we’re so blessed,’” she said. She was told that the Rodrigos were chosen upon the recommendation of Lingayen-Dagupan Archbishop Socrates Villegas and Manila Archbishop Luis Antonio Cardinal Tagle, another close friend of the family.

Boots said what makes the privilege of meeting the Pope a real blessing was the fact that they neither expected nor asked for it. 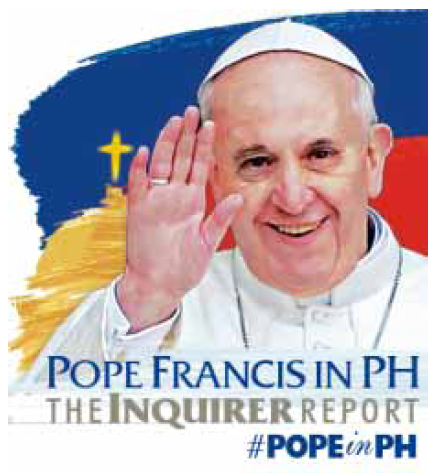 “I think that’s the most gratifying thing. It was offered to us, we did not lobby for it. We are very grateful for this wonderful blessing,” she said.

She also had up-close encounters with Blessed Mother Teresa during the few times the latter was in the country for her works of charity.

And yet the widow of the distinguished late Sen. Francisco “Soc” Rodrigo Sr. still feels “unworthy” to present a garland to Pope Francis when he visits the Philippines this January.

“Maybe I’m not worthy. Why me?” Rodrigo was quoted as saying by her daughter-in-law Boots, when she learned about the special role assigned to her during the papal visit.

Mommy Med, as she is fondly called, and more than 20 members of her family—from her children and their spouses to grandchildren and great-grandchildren—will be joining several other families in meeting Pope Francis at Mall of Asia (MOA) Arena in Pasay City on Jan. 16, 2015.

According to Boots, when the papal visit committee asked for a list of family members who will go to the papal event, they gave some 60 names.

“We were asked to trim it down because we might not all fit on the stage,” she said. They then submitted 28 names, including the names of two of Mommy Med’s great-grandchildren—Miel Sevilla Santos, 7, and Vicente Francisco Rodrigo, 11—whom the family nominated to escort the matriarch when she welcomes the Pope with a garland.

King, on the other hand, will read a special message for the Pontiff on behalf of all the families present at the event.

Boots said the original request by the papal visit committee was for Mommy Med to read the message for Pope Francis.

“But she is painfully shy, especially when it comes to public speaking,” Boots said of her mother-in-law.

Explaining why the Rodrigo family was given these special tasks during the papal visit, Villegas, also president of the Catholic Bishops’ Conference of the Philippines, said: “The family has four generations already and the whole family of four generations is devoutly Catholic.”

Villegas and a close friend of the Rodrigos, said around 15,000 people from various dioceses all over the country are expected to participate in the MOA event.

According to Boots, Mommy Med spends most of her time in prayer.

“She attends the 6 p.m. Mass at Mt. Carmel Shrine every day, sitting on the same pew she has occupied for a number of decades now—the same one where her husband regularly sat with her until his death in 1998,” Boots said in a phone interview.

In the tribute she wrote for the Inquirer earlier this month to honor her mother-in-law on her 100th birthday, Boots said Mommy Med has served the Church and civic groups with dedication, even while she was a homemaker and full-time mother for most of her married life.

“She served as president of Catholic Women’s League and was on the board of National Sandigan Foundation. To this day, she continues to attend meetings, retreats and conferences, and serves in the working committees,” Boots said of her mother-in-law, whom she also described as a “walking wonder” because she walks unaided and quite fast despite her age.

In fact, Mommy Med “unselfconsciously caught everyone’s attention with her grace and sure-footed gait, sans cane or walker” when she gave away the 75-year-old King in marriage to his 69-year-old bride, Boots, on June 14.

Mommy Med has maintained close working relationships with the clergy and the religious, many of whom concelebrated her birthday Mass on Nov. 18.

Her late husband, Senator Soc, who served as a legislator, educator and lay leader, also gave much of his time and resources to National Catholic Action and other church organizations.

Mommy Med’s reaction when King broke the good news over a family lunch was very typical of the matriarch.

“Everyone got excited. For Mommy Med, it was a silent gush…. You know, she’s very low-key. Every time she has these kinds of privileges, she’s not one to [brag] about them,” Boots said.

“Her comment, ‘Am I worthy of all this,’ was very typical of her,” she added.

Boots said everyone in the family felt so excited for the day they would get to meet the Pontiff.

“I think every Filipino, whether Catholic or non-Catholic, every [person] in the world would pray for a privilege like this,” she said.

“We’re practically talking about it every Sunday over family lunches,” she added, revealing that they initially had to keep it among themselves until the formal announcement, which Villegas did during Mommy Med’s birthday Mass.

While it will be the first time for the Rodrigos to meet Pope Francis, they had a few encounters in the past with St. John Paul II when he was still Pope.

“Mommy Med and her daughters Ditas and Pempe were part of a small group that had an audience with the then Pope John Paul II during the canonization of San Lorenzo Ruiz in the Vatican,” said Boots.

Mommy Med again had the opportunity to be part of a group that had an audience with one of the most beloved Pontiffs during the beatification of Blessed Mother Teresa in 2003.

“She is a regular benefactor of many Church causes, notably Mother Teresa’s Home for the Dying Destitute,” Boots said. During the few times Mother Teresa visited the Philippines, Mommy Med was always part of the delegation that met her at the airport, she added.

Another rare privilege that Mommy Med and her daughters Ditas and Pempe treasure very much is when they received communion from Padre Pio.

“That was in 1958, when they attended a Mass officiated by Padre Pio at a church in San Giovanni Rotondo in Italy. It was Padre Pio who gave them communion,” said Boots said.

Boots herself has her share of papal encounters, this one with St. John Paul II during the latter’s visit to the Philippines in 1981.

“Our family—my late husband Pete, our children Leah, Chiqui, Joey and Ben, and my mother, the late Belen Cristobal Anson—was chosen to be one of the three families, representing Luzon, the Visayas and Mindanao to meet the Pope. We were the Luzon family,” she said, recalling that the meeting occurred at the Church-run Radio Veritas, where she was then working as a regular broadcaster.

Boots said she couldn’t forget the experience because she mistakenly addressed the Pontiff as “Sir” when he asked her how she was doing.

“Prior to the meeting, I was repeatedly reminding my children on how they should properly address him and the other church leaders. But it turns out I would be the one committing a boo-boo,” Boots said, laughing at the recollection.

“But the Pope just kindly smiled and went on to touch Chiqui’s face. We couldn’t stop giggling after he and his party left,” she added.

Boots said she looked forward to kissing the Pope’s ring when she shares the stage with him in January.

But no, she won’t offer the younger family members any “tutorials” on how to properly address the Pope.

“King and his siblings, I’m sure, will take care of that,” Boots said, laughing.

Boots said her children Joey and Chiqui and her husband, Rizal Rep. Roberto Puno, will join the Rodrigos in meeting Pope Francis in January.

“I’m sure that the experience of meeting the Holy Father will enhance our faith collectively and individually. I believe it will solidify the family even more greatly, it will make us even closer,” she added.