Obama slams violent protesters: I have no sympathy for you | Global News
Close
menu
search

Obama slams violent protesters: I have no sympathy for you 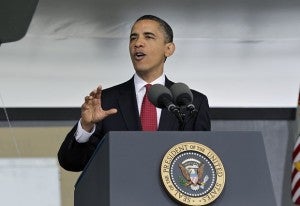 CHICAGO—US President Barack Obama sharply rebuked protesters on Tuesday night for racially charged violence in Missouri, saying there was no excuse for burning buildings, torching cars and destroying other property after a grand jury declined to indict the white police officer who shot a black teenager.

As darkness fell in Ferguson, Missouri, where authorities hoped to avoid a second night of chaos in the streets, Obama said destructive actions were criminal acts and those who were responsible should be prosecuted.

“To those who think that what happened in Ferguson is an excuse for violence, I do not have any sympathy for that. I have no sympathy at all for destroying your own communities,” Obama said.

Obama’s call for calm a night earlier, just after the grand jury’s decision was announced, was not heeded by some in the crowd in the St. Louis suburb who burned police cars, smashed and looted storefront windows and fired gunshots.

In a real-time display of the limits of his influence, television networks showed Obama’s remarks from the White House on a split screen with live video of the violence.

The president spoke from Chicago, a trip planned to focus on immigration but overshadowed by the news the night before of the decision not to indict Ferguson Police Officer Darren Wilson in 18-year-old Michael Brown’s death on Aug. 9.

Obama said he understood that many people were upset by that decision.

“The frustrations that we’ve seen are not about a particular incident. They have deep roots in many communities of color who have a sense that our laws are not always being enforced uniformly or fairly,” Obama said.

“There are productive ways of responding and expressing those frustrations, and there are destructive ways of responding,” he said. “Burning buildings, torching cars, destroying property, putting people at risk. That’s destructive and there’s no excuse for it. Those are criminal acts and people should be prosecuted if they engage in criminal acts.”

White House officials are still considering whether Obama should travel to Ferguson, weighing the importance of the moment with the risk of inflaming tensions.

Officials said a trip wouldn’t come this week with the US harvest holiday of Thanksgiving, giving them time to watch the response unfold and consider the president’s options.

Before he left the White House, the president was briefed by Attorney General Eric Holder on the latest developments and the justice department’s long-running efforts to restore trust between minority communities and law enforcement.

Obama said he instructed Holder to set up regional meetings on building trust.

“My message to those people who are constructively moving forward, trying to organize, mobilize and ask important questions about how we improve the situation, I want all those folks to know that their president is going to work with them,” Obama said. “The frustrations people have generally are rooted in some hard truths that have to be addressed. Those who are prepared to work constructively, your president will work with you.”

“So don’t take the short-term, easy route and just engage in destructive behavior,” Obama said. “Take the long-term, hard but lasting route of working with me and governors and state officials to bring about some real change.”

Obama’s efforts to strike a balanced middle ground in response to Ferguson stand in contrast to the deeply personal remarks he delivered last year after a Florida jury found another unarmed black teenager’s killer not guilty.

“Trayvon Martin could have been me 35 years ago,” Obama said then, going on to describe how he had experienced being followed in a department store or hearing drivers lock their doors when he walked by.

The cases have many differences, most notably that the bullets that took Brown’s life came from a policeman’s gun after a confrontation on the street.

DFA: No Filipinos in riots

Filipino-Americans join protest marches in US