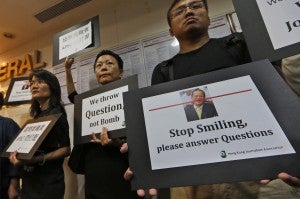 “After a reevaluation, the National Intelligence Coordinating Agency (Nica) said they (the journalists) are no longer considered as threats and the ban was lifted effective today,” the bureau’s spokesperson, Elaine Tan, said on Tuesday.

She said the foreign journalists may now visit the Philippines as tourists, subject to regular immigration inspection.

The nine Hong Kong television and radio reporters, who allegedly shouted questions at Aquino concerning the Luneta hostage crisis in which eight Hong Kong tourists were killed in 2011, were placed in the BI’s blacklist last June 6 at the request of the Nica because they were considered “a threat to public safety” following “acts committed against the President” at the Bali summit.

A Hong Kong television cameraman was denied entry at the Ninoy Aquino International Airport (Naia) last Nov. 20 and given a copy of the June 6 order banning him and eight others from entering the Philippines and covering next year’s Apec summit.

However, the Department of Foreign Affairs subsequently said it had not been consulted about imposing the entry ban, and demanded a review.

The blacklisting last week prompted swift criticism, with the Foreign Correspondents Association of the Philippines saying the move sent a “chilling message.”

“If the government’s intelligence agency does not like the way you ask questions, you may be labelled a public safety threat and blacklisted from the Philippines,” the group said.

The Hong Kong Journalists Association said in a letter to Mr. Aquino last Monday that the journalists were just doing their job in asking him for comments on the 2010 killing of eight Hong Kong tourists taken hostage by a disturbed former policeman. It said that no behavior by the journalists “could possibly justify their classification as a security threat to your country,” and that the blacklisting was “a blemish on the reputation of the Philippines as a democratic nation.”

Hong Kong’s government also expressed concern and said it would follow up on the matter with the Philippine Consulate General.

The Hong Kong journalists were also expelled by Apec officials from the Bali summit following the incident with Aquino last year, and disallowed from covering the rest of the summit.

In its Nov. 21 letter to the BI, the Nica said the ban should be lifted because “no untoward incident” occurred during the President’s visit to China for the Apec leaders’ summit there earlier this month.–Jocelyn R. Uy with Christian V. Esguerra, AFP and AP